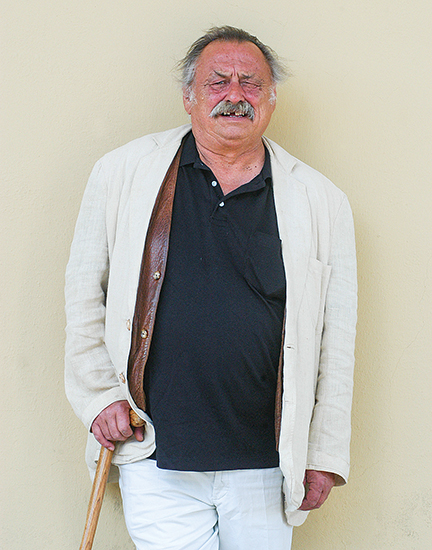 Author Jim Harrison died Saturday at age 78 in his Arizona home, and while his works of the written word will be remembered for generations to come, his friends in Oxford will also cherish their memories of the gruff writer who loved good food, a strong drink and pretty waitresses.

Harrison was best known by the mainstream for his historical saga, “Legends of the Fall,” which was turned into a major motion picture in 1994 that starred Brad Pitt, Anthony Hopkins and Aiden Quinn.

Spokeswoman Deb Seager of Grove Atlantic, Harrison’s publisher, told The Associated Press the cause of his death was unknown.

The versatile and prolific author completed more than 30 books, most recently the novella collection “The Ancient Minstrel,” and was admired worldwide. Sometimes likened to Ernest Hemingway for the range and kinds of his interests, he was a hunter and fisherman who savored his time in a cabin near his Michigan hometown, a drinker and Hollywood scriptwriter who was close friends with Jack Nicholson and came to know Sean Connery, Orson Welles and Warren Beatty among others. He was a sports writer and a man of extraordinary appetite who once polished off a 37-course lunch, a traveler and teller of tales. Many of those tales were told in Oxford.

During his trips to Oxford, he fell in love with the Square, the food and the nightlife. With William Faulkner being one of his most favored authors, Harrison and Oxford were a good fit.

“Jim had a special relationship with Oxford and he came here a lot,” Howorth said. “He came for at least two Conferences of the Book and for about eight book signings from the late 1980s through the mid-2000s.”

Howorth described Harrison as larger than life, and not just because he happened to be a tall man.

“He drank quite a bit and had a huge appetite,” Howorth said. “Much of what he wrote about was food and wine.”

One such book, “The Raw and the Cooked: Adventures of a Roving Gourmand,” features a photo of Harrison on the cover eating at Ajax’s Restaurant on the Square.

Harrison was a bit of a flirt, according to Ron “Ronzo” Shapiro. “He was constantly flirting. He’d even pinch their butts and somehow he got away with it. If I did that, I’d get smacked. But not him.”

Shapiro said he spent a good bit of time with the author.

“He was so wonderful,” Shapiro said. “We would be sitting there taking shots and people getting drunk and all of a sudden he would just start quoting some his poetry and everyone would stop and just listen.”

Harrison’s screenplay credits also included “Revenge,” starring Kevin Costner, and the Nicholson film “Wolf.” But he would liken the unpredictable and nerve-wracking process to being trapped in a “shuddering elevator” and reminded himself of his marginal status by inscribing a put-down by a Hollywood executive, “You’re just a writer,” on a piece of paper and taping it above his desk.

Harrison could have been a superb character actor, a bearded, burly man with a disfigured left eye and a smoker’s rasp who confided that when out in public with Nicholson he was sometimes mistaken for the actor’s bodyguard. Erudite enough to write reviews for The New York Times and to quote Wallace Stevens from memory, he also had a strong affinity for physical labor and a history of writing stories for and about men.

“My characters aren’t from the urban dream-coasts,” he told The Paris Review in 1986. “A man is not a foreman on a dam project because he wants to be macho. That’s his job, a job he’s evolved into.

“How is it macho that I like to hunt and fish? I’ve been doing it since I was 4.”

He set many works in rural Michigan, including detective novels “The Great Leader” and “The Big Seven,” and used Nebraska as the backdrop for one of his most acclaimed works, “Dalva.”

His other books included a volume of novellas, “The River Swimmer” and the poetry collections “Songs of Unreason” and “Returning to Earth.” He was voted into the American Academy of Arts and Letters in 2007.

Harrison married Linda King in 1959 and had two daughters.