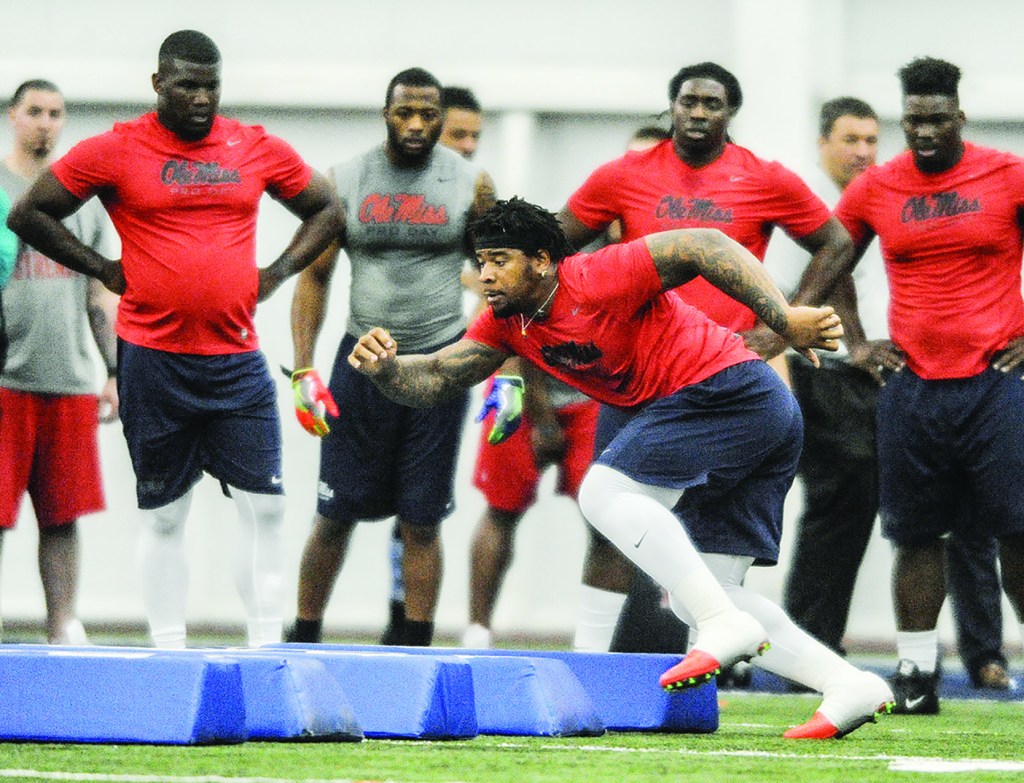 Monday served as a reminder of why many of the questions Robert Nkemdiche is fielding from NFL teams aren’t about what he can do on the field.

After running a 4.87-second 40-yard dash, benching 225 pounds 28 times and notching a 35-inch vertical jump at the NFL Scouting Combine in February, Nkemdiche displayed his unique athleticism during position drills at Ole Miss’ Pro Day at the Manning Center. The 6-foot-4, 296-pounder chopped his feet quicker than most players his size and easily weaved his way around blocking dummies.

The question teams have to answer is if Nkemdiche’s off-field behavior is worth making a large investment in the Rebels’ former defensive tackle.

It’s been a hot topic since his infamous fall from a fourth-floor hotel room in December that eventually spelled the end of his college career. Nkemdiche said during an interview at the combine that he was drunk, not high, that night despite being charged with marijuana possession after the incident once marijuana cigarettes were found in the room from which he fell.

After his workout Monday, Nkemdiche said he’s tried to convey to team representatives his actions were an isolated lapse in judgment.

“I’ve been straightforward with the teams,” Nkemdiche said. “I’ve made it clear that that’s not who I am. That’s not anything they have to worry about with me because that’s not my character, that’s not my personality.”

It’s the same answer Ole Miss coach Hugh Freeze has given league personnel who have broached the subject.

“Obviously we were very up front and honest that he made a poor choice and he suffered the consequence of not playing in the Sugar Bowl,” Freeze said. “Hopefully he will learn from that. That was not a pattern that continued to happen throughout the three years. That’s really all I can speak of from that. Hopefully he’s learned from that.”

Teams are also reportedly concerned about the influence of Robert’s older brother, former linebacker Denzel Nkemdiche, who was hospitalized twice last year for undisclosed reasons. The two lived together during their time at Ole Miss, but Robert said they will separate once he gets drafted.

“We’re at a point in our life where we’re grown up. We have to understand the situation,” Robert said. “Some things have to happen. It’s tough love, but I’m always going to be there. … It’s not like I’m not going to see him, but living together isn’t something that I want to do. I just want to be focused on my own and just really tune in to what’s set forth and what’s next.”

Teams are still heavily interested in Nkemdiche, who said he’s hearing from teams that he could still be selected among the top 10 picks of next month’s NFL Draft. Nkemdiche said he has pre-draft visits scheduled with numerous teams, including San Diego, Oakland, Miami, Arizona and Denver.

“From what I’ve heard from scouts and talking to head coaches and GMs, I’ve heard a lot of good things,” Nkemdiche said. “I’m not worried.”

There are also some draft analysts who believe the off-field missteps could cause Nkemdiche to fall out of the first round completely. That call is up to the teams at this point, Nkemdiche admitted, but he said he’ll make the best of whatever happens.

“(Being a first-round pick) is what I’ve worked for. It’s what I’ve earned,” he said. “But if that doesn’t happen, it’s not going to stop me from being a great NFL player.”