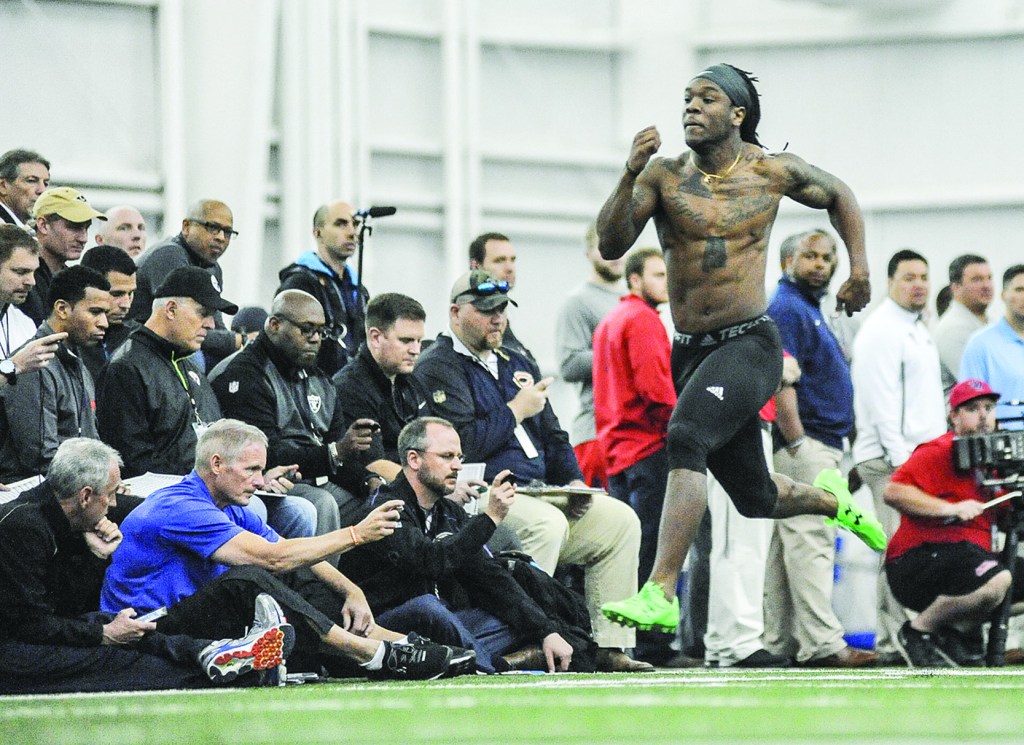 Trae Elston completes his attempt in the 40-yard dash during Ole Miss’ Pro Day at the Manning Center on Monday. Elston was one of many former players who did not get a chance at the NFL combine looking to impress scouts and representatives from every NFL team

The college and professional universe centered around Oxford, and more specifically the Manning Center, as it was Ole Miss’ Pro Day on Monday.

With most of the attention from the NFL and SEC Networks as well as ESPN focused on the big three of projected first-round picks Laremy Tunsil, Laquon Treadwell and Robert Nkemdiche, there were other former Rebels who were on hand to show what they could provide for prospective suitors.

Scouts or representatives were on hand from all 32 teams in the NFL, including five general managers, to watch 19 former Ole Miss players go through drills in the annual event leading up to the NFL Draft April 28-30 in Chicago, Illinois.

Notable players such as Trae Elston, Mike Hilton, Chief Brown and Channing Ward were some of the players to participate who were not invited to the NFL Combine held in Indianapolis, Indiana, last month.

For them, it was the opportunity to put on a show for people who they may not have gotten the chance to if they were not down there for the big three. They made the most of it.

“That’s how you find the diamond in the rough,” Brown said of all the attention being paid to Ole Miss’ Pro Day. “You can bring on guys (scouts) don’t get to see a lot. Those guys shine on the big stage. You get more Malcolm Butlers and guys like that.”

“You always want your kids to get opportunities,” Ole Miss coach Hugh Freeze said. “I’m on a mission right now to make sure our young men have an opportunity to do something that changes their families’ lives after football. In the meantime, you know that’s a big part of who they are. We want them to get chances and opportunities to play. Anything that helps get them those opportunities is a good thing. A very positive thing.”

Walton impresses
All eyes may have been on Treadwell and Tunsil, but there was another offensive player who tried to make the best first impression he could.

Memphis native and former Rebel running back Jaylen Walton participated in the Pro Day actives and had a good outing, running an unofficial 4.50 40 — one of the top times of the day — and had a 114-inch attempt in the broad jump.

“Nothing surprised me,” Freeze said of Walton’s day. “He’s who he is. He’s very quick twitched and a very solid football player. It’s just a matter, with the way God made him and his size, does he fit in somebody’s system? Or can he be a third-down guy for just about anybody? I think he has the potential to be that. They’ve got to decide with their roster management where do you keep a back with his stature.”

Full circle
February 6, 2013 is a day that will be a watershed moment for the Ole Miss football program as it is the day the big three signed with the Rebels as a part of the first top-5 signing class in program history.

All eyes were on Oxford that day, and fast forward to Monday when those same eyes were once again focused on Freeze and the players he brought into the fold three years ago.

Ole Miss has been and will continue to be on the tips of draft analysts and talking heads’ tongues for at least another month with the draft looming, if not longer than that. It is a key recruiting tool that Freeze has not let go to waste and will continue to use it with future prospects.

“The importance of a football program to a university, I don’t know that you can overstate it,” Freeze said. “It’s a vital part, especially to the region which we are located. After that signing class, I remember (former Ole Miss Chancellor Dan Jones) saying it was the single most applications in recorded history of the school. The brand for Ole Miss has changed. We can pick up the phone to call recruits or get them to call us. It’s obvious to them the narrative around our program has changed.”