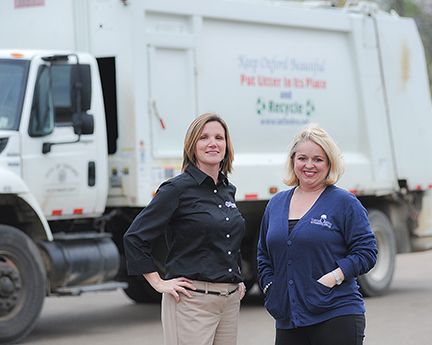 Michelle Robinson, left, is the recycling coordinator and Amberlynn Liles is superintendant for Environmental Services for the city of Oxford, in Oxford, Miss. on Wednesday, March 30, 2016.

On the Oxford city’s website, Amberlynn Liles’ title is superintendent of Environmental Services, but around the office, she’s know mostly as “boss lady.”

She heads up the city’s trash collection services, which is comprised of 45 men. Traditionally a man’s world, she and Recycling Coordinator Michelle Robinson prove each day there is no longer an area of local government that women cannot take the helm.

Worked her way up

Liles, 37, started with the city as the recycling coordinator in Oxford in 2001. For 11 years she worked to get Oxford on the map as a sustainable city. In 2011, she received the Pat Fordice Award from Keep Mississippi Beautiful for her efforts.

In 2012, she was hired as the assistant sanitation director until being appointed superintendent in 2014.

“I was the only woman in this department for 13 years,” she said.

Before coming to the city, she worked at North Mississippi Regional Center on the overnight shift. The hours became a hardship and she applied with the city of Oxford for the newly created recycling coordinator position. She would miss working with the clients at NMRC; however, in her new role, she was able to still see them by putting them to work. Several clients work for three hours a day, five days a week, helping sort the recyclables before they’re hauled off to the recycling plant.

While she worked alongside of the trash collection during her recycling days, she realized there was a lot she didn’t know when becoming assistant director, and even more once being hired as superintendent.

“It was an eye opener for me that even after 11 years here, how much I didn’t know,” she said. “Like how mean trash collection customers can be compared to recycling customers, and working with the commercial side of things is something I’m still learning.”

She’s had people come to her office, located inside the city shop on Molly Barr Road, demanding to see the boss, even after she addressed them.

“They expected a man,” she said.

Randy Russell and Eddie Anderson were the superintendents prior to Liles over the past 20 years. But Liles isn’t the first woman to head up Oxford’s garbage collection. Shirley Michaels held the position 20 years ago.

After Liles moved from recycling to solid waste, the position remained open for three years until Robinson was hired in May 2015. She worked at the University of Mississippi’s Center for Math and Science as an administrative assistant. She had been an avid recycler at home in the city’s Community Green development that’s made up of several “recycled” houses that were given to the city by the university.

“Being sustainable took a strong presence in our lives,” Robinson said.

Robinson oversees the day-to-day operations of the recycling plant and goes to local schools to help educate the students about recycling. She works with seven employees and the clients from NMRC. She too, is called “boss lady” around the shop.

She said her biggest challenge has been to convince her male co-workers she’s capable of pulling her weight.

Liles said while perceptions have changed over the years as far as women in traditionally male roles, the pay scales haven’t quite caught up.

“Industry-wide, women in higher positions are still paid less than men in the same position,” she said.

The name of the department changed from the Solid Waste Department to Environmental Services last year since the workers deal with more than just garbage collection. The department includes cemetery and rights-of-way maintenance as well.

Liles and Robinson said the men in the department are generally respectful and they feel as if they’re just “one of the guys.”

“I’ll be in my office and I’ll hear the guys out in the break room and they’ll start talking about women and stuff and I’ll have to holler, ‘I’m in here. I can hear you.”

Assistant director Jamie Shaw and foreman Delaine Rockette both started working under Shirley Michaels 20 years ago and have had two male bosses before Liles took over.

“I think women can be more demanding at times,” Shaw said. “But they get stuff done. They do those eyes like the cat on Shrek and that’s all it takes.”

While maybe demanding, Rockette said Liles and Robinson are also more compassionate and concerned about their co-workers.

“We used to get a spoon and were told to go pick up garbage,” he said with a chuckle. “But Miss Amberlynn has worked hard to get us better equipment.”

A mother of a 9-year-old boy, Liles admits some mothering escapes from time to time at work.

“I’ll have to tell them to wear their rain gear when the weather is bad or bring an extra pair of clothing on rainy days,” she said. “I’ve tried to get stuff in here to make their days more comfortable and bring less stress to their jobs, like rain gear, but sometimes I have to stay on them to use it.”

Shaw said he prefers a woman boss over a man.

“Get a man in power and you can’t get him to listen to nothing,” he said. “Too much pride sometimes with men.”