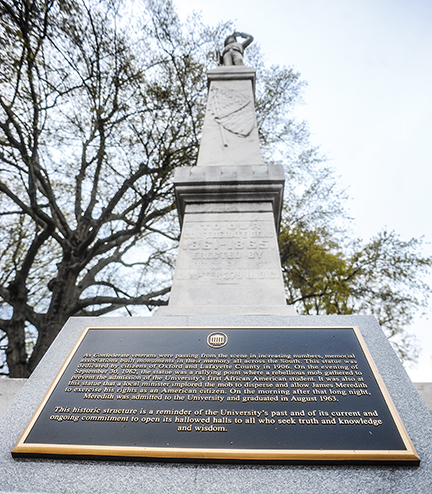 Bruce Newman The current plaque is pictured on the Confederate soldier statue at Lyceum Circle of the University of Mississippi campus. Input is being sought to consider whether and how the wording on the plaque should be revised.

A committee has been formed at the University of Mississippi in response to those critical of the recent installation of a plaque near the Confederate statue at Lyceum Circle, and it will process input from the community.

UM Chancellor Jeffrey S. Vitter informed faculty and students Tuesday in a campus-wide email of the formation of the Chancellor’s Advisory Committee on History and Contextualization.

Vitter met last Thursday with two faculty members from the Critical Race Studies Group, representatives from the UM NAACP student chapter and committee members charged last summer by interim chancellor Morris Stocks to draft the language on the plaque that was installed on March 19.

During the meeting, Drs. Donald Cole, Andrew Mullins, Charles Ross and David Sansing “expressed their interest to consider all input received to date about the wording on the plaque at the Confederate statue, as well as to invite further suggestions from the UM community to help determine whether and how the plaque should be revised,” Vitter wrote. “I have complete respect for the process followed, and in that light, I respect the committee’s request to have more time to rethink their recommended wording. I agree that everyone who wants to provide input should be able to do so.”

“The goal is to provide a process going forward that is transparent, inclusive and aligned with our creed,” Vitter wrote in the email concerning the advisory committee, which will be formally announced later this semester.

Vitter added the advisory committee will be tasked with completing contextualization of the remaining three campus projects at Paul B. Johnson Commons, Lamar Hall and Vardaman Hall, “determining if and how other contextualization projects should be undertaken, and assisting in telling more of the story of the university’s history.”

Those wishing to provide input may do so by April 8 by visiting the Campus Briefs section of the university’s website.

Earlier this month, the campus chapter of the NAACP voiced its displeasure with the plaque, because the inscription on the plaque does not include slavery as the central issue to the Civil War.

The statue of a Confederate soldier was placed on campus in 1906.

Supporters of the Confederate statue don’t believe a plaque is required for contextualization.

“Adding a politically correct plaque in front of the Confederate statute is an insult to the century-old campus landmark,” Jon Rawl with the University Greys said earlier this month. “The statute’s purpose has not changed since its 1906 dedication; memorializing the dozens of University of Mississippi students and thousands of Mississippians who marched to war and died.”