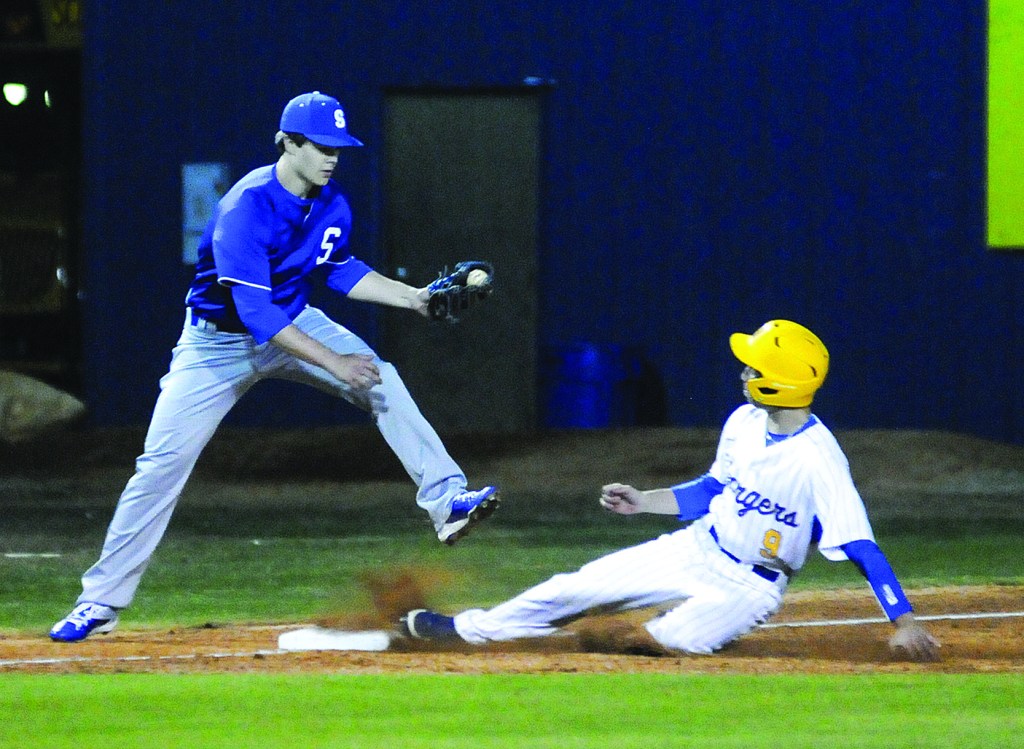 Oxford’s Giles Lamar slides into third base as Saltillo’s Hayden Palmer fields the throw during Tuesday’s Region 2-5A game at Edwin Moak Field. The Chargers improved to 3-0 in the region with a 10-1 win.

Thomas Dillard isn’t thinking so much as simply playing, and Oxford is reaping the benefits.

Dillard continued his recent tear with a pair of home runs and a season-high six RBIs Tuesday against Saltillo, leading the Chargers to a 10-1 win at Edwin Moak Field that kept them unbeaten in Region 2-5A play. Drew Bianco added to the power surge with a solo shot in the fifth inning to back starter Houston Roth, who tied a career-high with 16 strikeouts in the win.

“Just really trying to relax and put my swing on the ball,” Dillard said.

It’s a simple approach the Ole Miss signee admitted he overcomplicated early in the season with his new team. Playing his senior season at Oxford after transferring from Briarcrest Christian School in Memphis, Dillard had just two multi-hit games through the Chargers’ first 10 games as he put pressure on himself to produce in the middle of the order, something head coach Chris Baughman could sense during Oxford’s trip to Atlanta earlier this month to play in the Perfect Game Showcase.

“I said (to Dillard), ‘Be a kid once and just play,’” Baughman said. “Ever since then, I don’t think it was any magic pill I’ve given him for sure, but I think he may have taken that to heart a little bit.”

Dillard got Oxford (13-5, 3-0 Region 2-5A) on the board in the first with a three-run blast to the opposite field and followed Bianco’s homer in the fifth with a line drive off the top of the scoreboard to put Oxford up 8-1. Dillard, who added a sacrifice fly in the third and an RBI single in the sixth, finished 3-for-3 and is hitting .600 (15 of 25) in his last eight games with seven of his nine home runs coming in that span.

“Pressing and trying to do too much will always get you in trouble, so just trying to relax, have fun and enjoy this group of guys on my team.”

Dillard and Bianco accounted for four of the six hits for Oxford, which got extra opportunities thanks to seven errors by Saltillo (9-4, 2-1). Hunter Hughes was pegged with the loss after allowing nine runs over the first four innings, though only six of them were earned.

It was more than enough support for Roth, who went the distance to improve to 5-0. The senior right-hander allowed just two more hits after surrendering a leadoff homer to Hayden Palmer in the third and has racked up 31 punchouts in his last two outings.

“When he didn’t have his fastball (command), he was throwing his off-speed stuff across the plate and getting ahead,” Baughman said. “He got ahead, stayed ahead and made them look silly all night.”

The Chargers will travel to Saltillo on Friday for a rematch at 7 p.m.

Junior infielder Ben Bianco had surgery Tuesday on his torn labrum and will miss the remainder of the season. Renowned orthopedic surgeon Dr. James Andrews performed the operation, Baughman said.

“I think it all went well,” Baughman said. “He’ll rehab and be back in due time.”