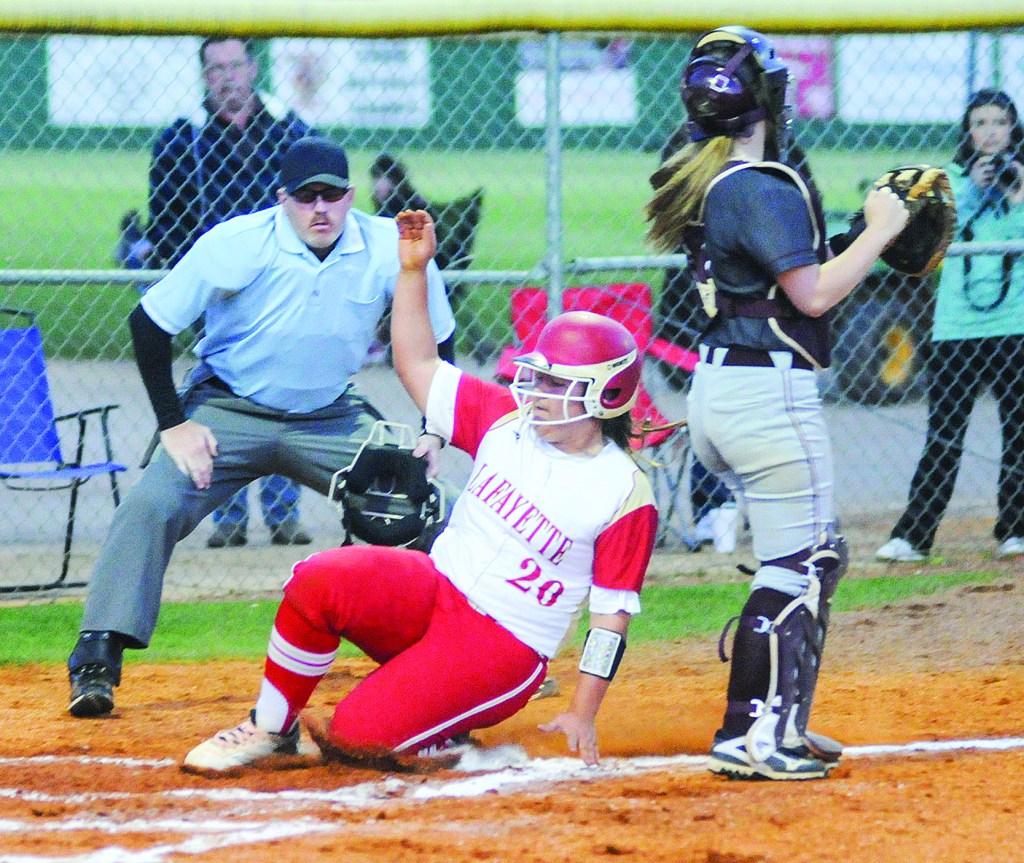 Lafayette’s Hope Patton (20) slides into home during their game against New Albany on Tuesday at the Lafayette High School softball field. The Commodores won 8-1.

The Lady Commodores of Lafayette created a two-game win streak after handily defeating the New Albany Bulldogs 8-1 Tuesday at the LHS softball field. Lafayette coach Katie Jenkins told her girls to “go out and have fun,” and that is exactly what they did.

With big performances at the plate from Hope Patton and Mariah Holland, Chloe Russell did her part in the circle by recording six strikeouts throughout the game. Both Patton and Holland went 3-for-4 with Patton making contact every appearance at the plate. Holland also drove in three runs, helping the Commodores trounce the Bulldogs.

“They need to have a more relaxed mindset out there, and that is exactly what they did,” Jenkins said. “They looked more relaxed at the plate.”

After accumulating 16 hits throughout the game, improved hitting was one goal the Commodores could mark off the checklist. Jenkins was also impressed by the pitching that held the Bulldogs to a single run and only allowed four hits. In the first inning, Russell struck out two of the first three batters she saw, and not much would change after her impressive start.

A hitting clinic in the fifth inning would create four runs and ultimately seal the deal for the Commodores. Starting off with a triple from Patton that went right past the center fielder, Lafayette created momentum that would lead to a fourth inning in which every Commodore got to bat.

It was an overall dominating game from the Lafayette squad, and the Commodores managed to work on and improve every aspect of their game. Jenkins said she was pleased with the team performance.

“Our pitching was key and hitting from the middle of our lineup really helped us, but we got to work on our baserunning, so that is always a positive,” Jenkins said.

The main goal that Jenkins put out for her team, like every game, was “we want to win.” Jenkins also added that she is “satisfied with how they played and believe they are good to go against Pontotoc.”