Treadwell: Physicality, not speed, is my game 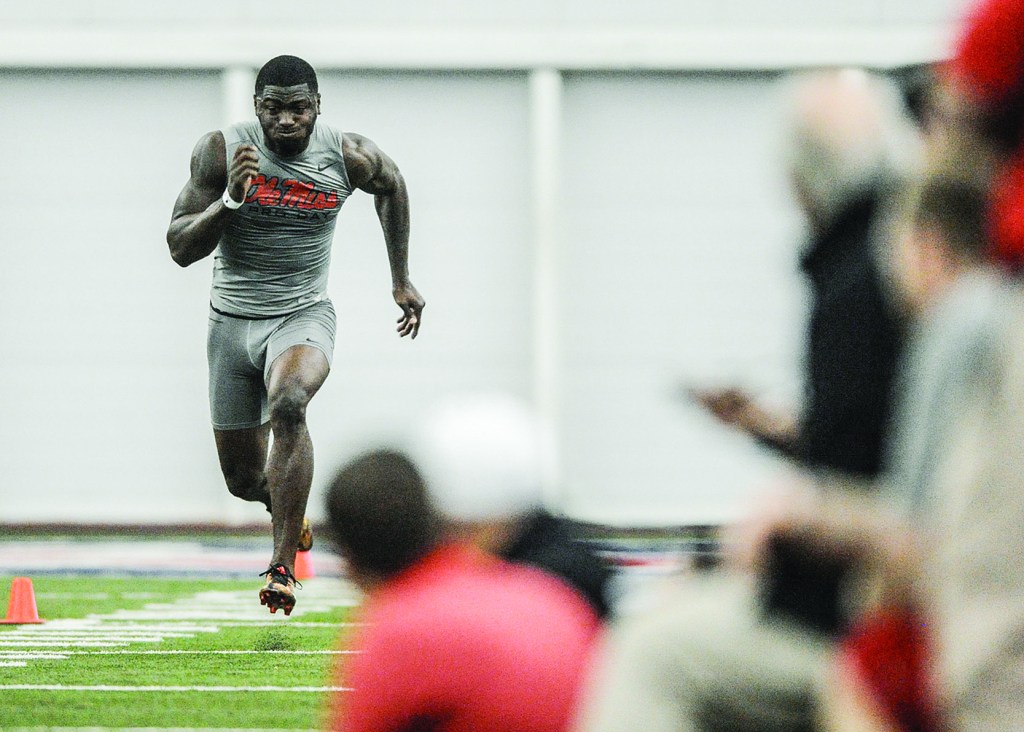 NFL representatives have the times they’ve been waiting for, and Laquon Treadwell was relieved to finally supply them.

Treadwell ran unofficial times of 4.63 and 4.65 seconds in the 40-yard dash at Ole Miss’ Pro Day on Monday, answering the only question league personnel had about the Rebels’ former receiver after Treadwell said he didn’t feel comfortable enough to run at the scouting combine in Indianapolis last month.

Those times are slow for a receiver, especially one seemingly jockeying for position in the first round. Scout Inc. ranks Treadwell as the top receiver and 13th-best prospect available in this year’s draft, but the times could give reason for teams who value top-end speed to pass on him.

But Treadwell wasn’t surprised by the results.

“I’m proud of myself,” Treadwell said. “I wanted to run better of course, but I’m proud of what I ran. It was a lot of pressure. You want to do your best. Me being a competitor, I wanted to look good and do it the best way I can.”

Treadwell’s game is more geared toward physicality than finesse. The 6-foot-2, 220-pounder’s advanced physique often allowed him to box out defenders in traffic and create separation with his upper body rather than his legs over the last three years to become one of the most productive receivers in program history.

“Everybody out there has their wants and their needs,” Treadwell said. “(Top-end speed) is not my game, I guess. I don’t have to run a 4.2 to win on a deep ball. I just play ball. I don’t go into it thinking I have to run super fast past you to beat you. I work on techniques and trying to beat you on different points and attacking the ball and making a play for the team.”

Treadwell came back from the broken leg and dislocated ankle he suffered late in the 2014 season to set single-season school records in receptions (82), receiving yards (1,153) and touchdown catches (11) last fall. He finished his career among the top 3 in school history in receiving yards, touchdown receptions and 100-yard receiving games.

Treadwell has pre-draft visits set up with numerous teams, including the Dolphins, Bengals, Browns, Vikings, 49ers and Cowboys. Where he ends up will depend on which team prefers the style he’s been playing his entire life.

“I’m not afraid to take a hit, and I’m really not afraid to go across the middle and make the tough plays and the tough catches with a defender around me,” Treadwell said. “I’m just a bigger-bodied receiver, and I try to play like that.”