EXTRA INCENTIVE: Rebels aim to bounce back against rival Bulldogs 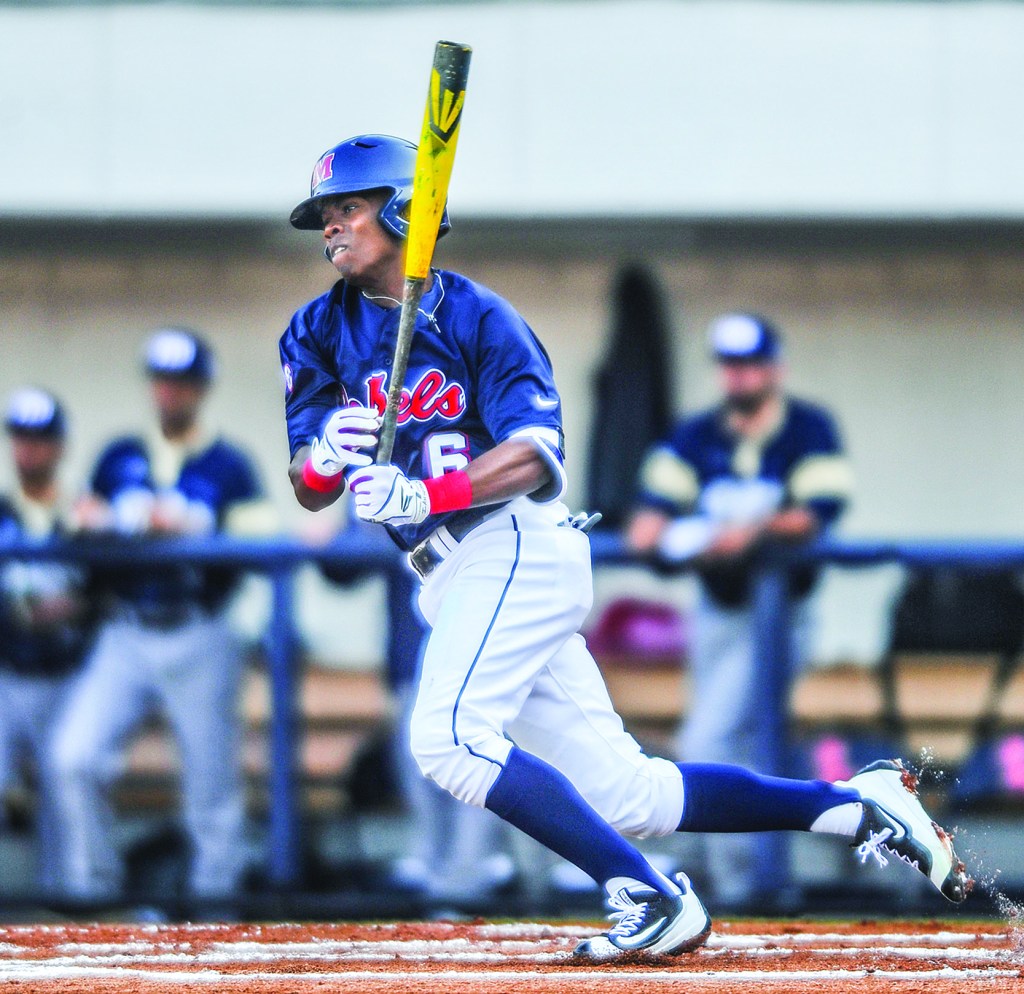 Ole Miss shortstop Errol Robinson (6) and the rest of the Rebels will try to get back on track against in-state rival Mississippi State this weekend in Starkville after being swept by South Carolina last weekend.

After a rough weekend where it was swept by a Southeastern Conference team at home for the first time in three years, the Ole Miss baseball team has to pick itself up and regroup.

The only problem is the Rebels will have to do so against a top-5 SEC opponent and an in-state rival all wrapped up in one as the No. 13 Rebels travel down to Starkville for a weekend series against No. 5 Mississippi State beginning tonight at Dudy Noble Field (6:30 p.m., SEC Network+).

With its mid-week game at Memphis postponed until April 19 due to inclement weather Wednesday, Ole Miss (20-5, 2-4 SEC) did not have the chance to bounce back before re-entering conference play.

“The mid-week would have been nice to kind of get the bad taste out of your mouth,” Ole Miss coach Mike Bianco said. “The truth is you got to do it at some point, and we didn’t get to do it on (Wednesday), so we get to do it (today).

“You’ve got to get up off the mat. This is (the SEC), and you’ve got to be able to handle the adversity. There’s time where we always said if you don’t play well, you lose. … I think they realize that we’re better than what we played, but we have to do that. It’s one thing to think it but another thing to do it.”

The Bulldogs (18-7-1, 4-2) come into the weekend having won their first two SEC series, including one against a Vanderbilt team that was ranked in the top 5 at the time and then taking two of three against Georgia last weekend.

Their offense is hitting a cumulative .317 at the plate led by Jacob Robson’s .379 batting average. Robson leads the team in steals with 10 and triples with three. Two other Bulldogs are hitting over .300 with Reid Humphreys and Jack Kruger each having 11 doubles and three home runs.

On the mound, Mississippi State will send junior Dakota Johnson tonight to face off against Brady Bramlett. Johnson has a 3-1 record and a 1.13 earned run average.

On Saturday, the Bulldogs will look to Austin Sexton, another junior right-hander who has a 3.72 ERA and a 2-1 record, to toe the rubber against Chad Smith.

On Sunday, Sean Johnson will get another shot on the mound as he is reinserted into the rotation after taking a weekend off to heal up, per Bianco.

Johnson did some short work on Monday and threw a bullpen on Thursday.

The last time Ole Miss made the trip down Highway 45 to Starkville, the Rebels left with a series win over the Bulldogs. It was another top-15 matchup which saw the Rebels take the Friday and Sunday games while dropping a close Saturday matchup, 6-5, in 10 innings.

Usual emotions
With the normal bragging rights on the line, there is a similar amount more on the line, much like in 2013 with both teams trying to solidify their place in the national landscape and keep fighting for a regional berth and possibly a national seed if things fall their way after this weekend and into the SEC tournament in May.

For that to fall in the Rebels’ favor, some of the veteran players will rely on past experiences to share with the younger players who will be making the trip to Dudy Noble for the first time.

“Just keep your hands to yourself and your emotions to yourself, and you’ll be all right,” shortstop Errol Robinson said of his advice to the younger players. “Just let (Mississippi State) do what they got to do and let them have their fun, and we’ll have our fun on the other side.”

Personal struggle
Robinson is trying to bounce back himself on an individual performance aspect as the junior moved around in the lineup for the first time this season when he went from being the leadoff or No. 2 hitter down to the six hole against South Carolina last Friday.

He went 1-for-11 in the series with the Gamecocks and failed to record an RBI or draw a walk. Robinson struck out once. Among the usual starters, he has the lowest batting average at .213 (20-for-90) and has 12 RBIs and one home run.

“It’s kind of a mixture of things,” Robinson said of the cause for his struggles at the plate. “I wouldn’t say I’m not seeing things or not hitting the ball well because I believe I am. Just a few things are going different ways, and a few things happen to not be going my way at the plate. The biggest thing now is to keep on cheering for the team and be as successful as I can and hopefully more balls start to fall in.”

Saturday’s game is set for a 2 p.m. first pitch with Sunday’s game beginning at 1:30 p.m. with all three games airing on the SEC Network+.