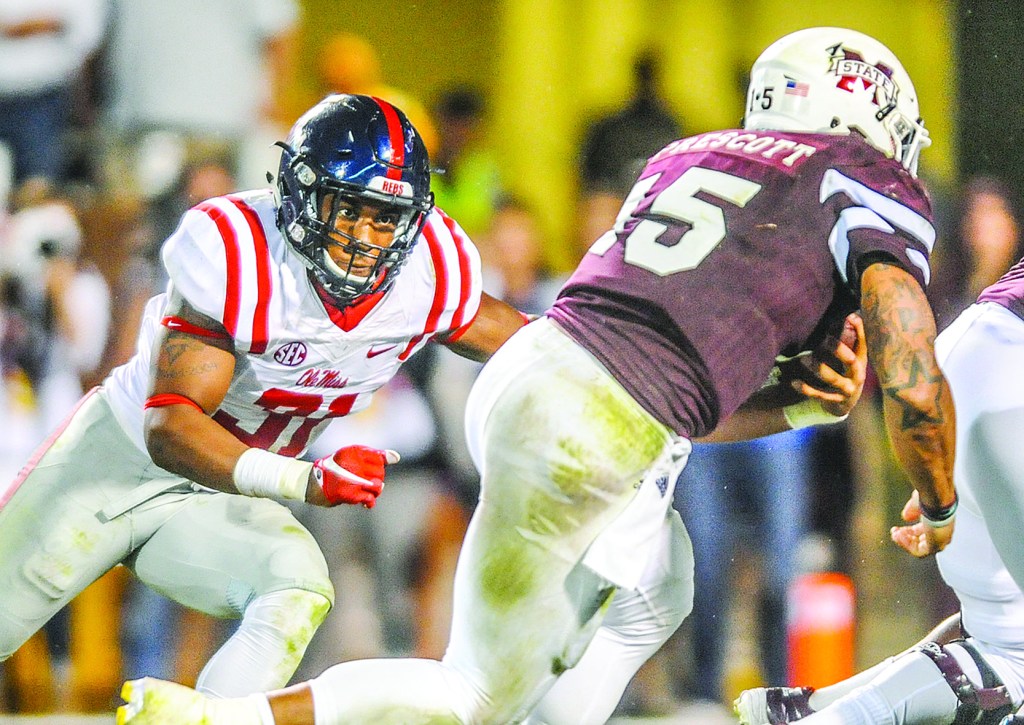 Rising junior DeMarquis Gates (31) has become the most experienced linebacker on the Ole Miss defense by default with the Rebels losing key pieces to graduation.

On a defense that included the likes of Robert Nkemdiche, Denzel Nkemdiche, C.J. Johnson, Mike Hilton and Trae Elston, it was Gates, Ole Miss’ rising junior linebacker, who led the Rebels with 76 tackles while alternating between the middle linebacker spot and the stinger, or outside, position.

With Johnson and Denzel Nkemdiche now gone, Gates is the most experienced option among the linebacking corps despite having just four starts to this point, all of them coming in Denzel’s place a season ago. He’s made it a point to embrace his newfound role.

“A lot more responsibility is on you,” Gates said. “You’ve got to step up to the plate and be a leader. I like being the leader of the defense.”

Gates, who mainly played special teams as a freshman before taking on a larger role on the defense toward the end of last season, is a favorite to grab a starting job with Ole Miss having to find two new starters at linebacker now that Johnson and Denzel Nkemdiche have run out of eligibility. The Rebels also have a pair of additions coming in the summer who are expected to contribute immediately in graduate transfer Rommel Mageo, who led Oregon State in tackles last season, and Iowa Western CC transfer Detric Bing-Dukes, a former Georgia signee.

Gates said he’ll welcome the competition at a position where Ole Miss needs it. Terry Caldwell, Temario Strong, Tayler Polk and Ray Ray Smith got limited snaps in reserve roles last season, Shawn Curtis and Willie Hibler, a converted tight end, are redshirt freshmen, and Donta Evans is the only linebacker the Rebels signed from the prep ranks in this year’s recruiting class.

Versatile option
Gates continues to work at both linebacker positions this spring, something he’s grown accustomed to since signing with Ole Miss out of Lovejoy (Georgia) High in 2014. Gates said he doesn’t necessarily prefer one over the other, and going back and forth has also helped the rangy 6-foot-2, 217-pounder get in tune mentally with the rest of the defense.

His coaches are comfortable with him wherever Gates lines up.

“He’s by far the best linebacker at this point, but he’s the most experienced linebacker and I’ve got him running both mike and stinger to cover ourselves at both ends,” defensive coordinator Dave Wommack said. “He’s been very steady and very consistent for us out there. He’s turned into a really good football player.”

With a heightened level of comfort in the defense, Gates is raising the expectations for himself come the fall.

“I think this is going to be a blowout season,” Gates said. “I just have to take what I learned from last year and make an effort for this year to step it up a little bit. Take more upon myself to do more — more tackles, more picks, more everything to help the team win. Hopefully that can help us take our team to the next level.”