DOMINATING THE FIELD: Chargers run away with EAGLE Invitational championships 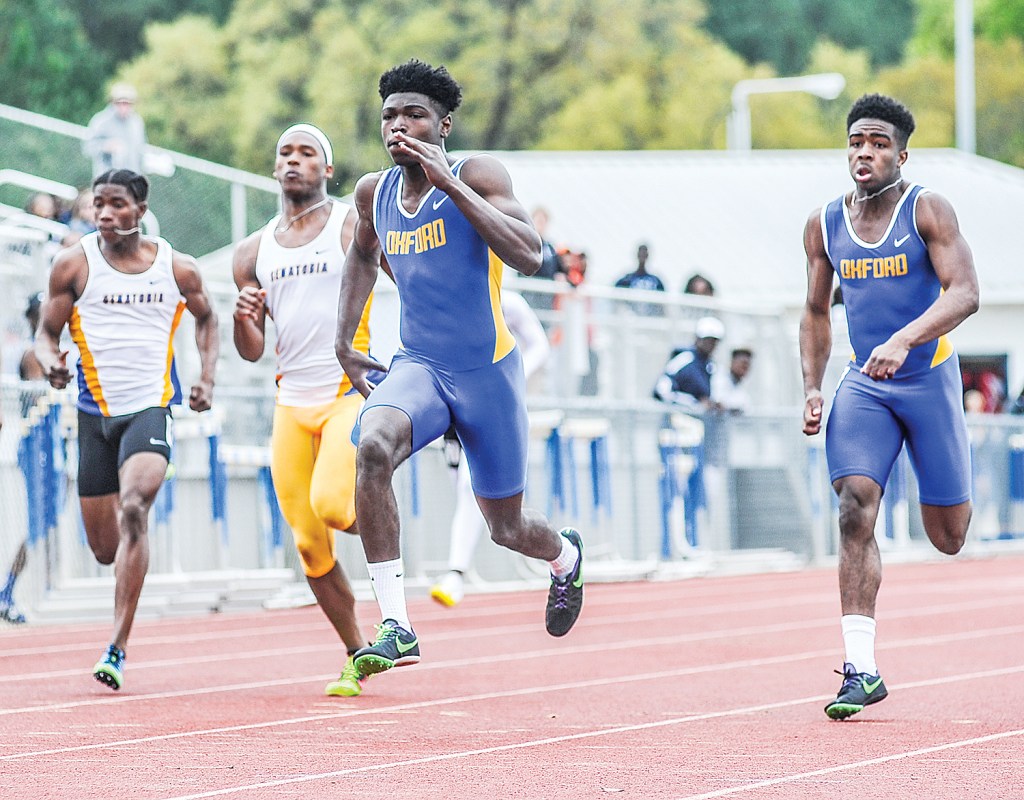 Oxford ‘s Jaquan Webb, left, and Devin Rockette run in the 100-meter dash in the EAGLE Invitational track meet at Bobby Holcomb Field on Friday. Webb won the event as the Chargers’ boys and girls teams cruised to the team championships. (Bruce Newman)

It was all smiles for the Oxford High boys and girls track and field teams as the Chargers dominated the competition in the Oxford EAGLE Invitational held Friday at Bobby Holcomb Field on the Oxford Middle School campus.

“It was a good day,” Oxford boys coach Chris Bush said. “Getting ready for districts, so we didn’t want to burn anybody down. Our A-listers, we didn’t put in a whole lot of events. Some other guys stepped up.”

Football and basketball standout D.K. Metcalf earned the 110-meter hurdles title in a time of 15.59 while also winning the triple jump with an attempt of 44 feet, 11 inches. Ken Presley won the 300-meter hurdles with a time of 39.61, breaking his own school record in the event.

D.Q. Thomas won the discus with a toss of 118-11, besting the second-place finisher by more than three feet.

“We got some young field events,” Bush said. “Our shot and discus throwers are developing, and we are pleased with that.”

The results were the same on the girls’ side of things with the Lady Chargers earning 195.5 points, 67 points better than second-place Independence (128.5). Senatobia took third with 112 points.

“We did exceptionally well,” Oxford girls coach Chris Patton said. “Freshmen that stepped up, this is their third meet running for us and they’re learning as we go along what it takes to compete at the high school level. They competed exceptionally well.”

Oxford had 12 first-place finishes, including a sweep of all four relay events. The 4×400 time of 4:10.53 bested the Lady Chargers’ season-best by six seconds, placing them No. 1 in Class 5A.

“First time running the hurdles, and (Epps) ran them under 50 seconds,” Patton said when asked which freshman impressed him. “The time that she ran actually placed her No. 2 in 5A right now. … The overall effort of the girls, their competitive spirit. Their will to win really drove them to this victory today.”

Tiara King won the 200-meter dash with McCall Mullins winning the 800 meters. Addie Thompson and Margaret Adams finished first and second, respectively, in the 1,600 meters. The duo duplicated those results in the 3,200 meters.

EXTRA INCENTIVE: Rebels aim to bounce back against rival…