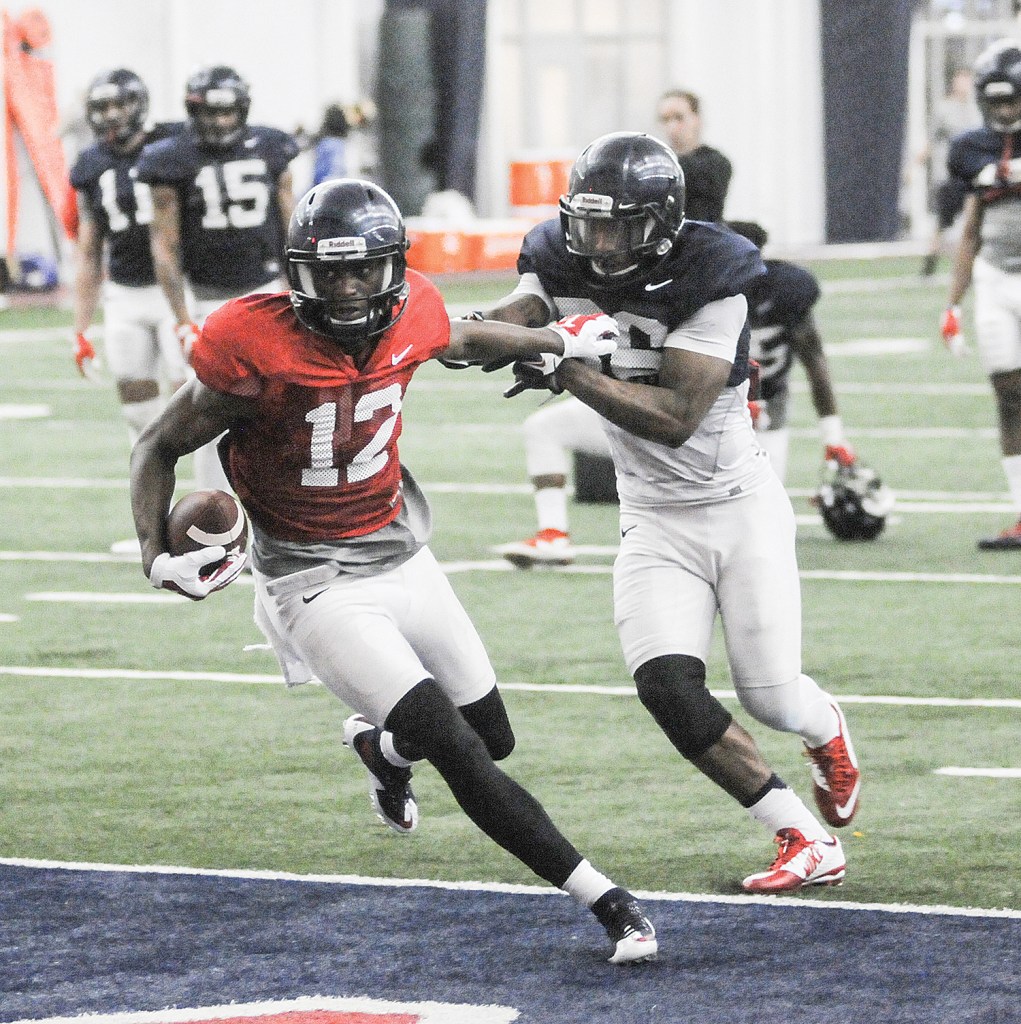 Van Jefferson’s preparation for his college football career has been a little different than most.

Ole Miss’ freshman receiver is pushing to be a part of the rotation in the fall, showing a combination of sound fundamentals and advanced technique that’s been evident ever since he arrived on campus. Jefferson has been tutored his entire life by an NFL assistant, and he hasn’t had to pay for any of the pointers.

Jefferson is the son of Shawn Jefferson, the wide receivers coach of the Miami Dolphins. It’s just the latest gig at the game’s highest level for the elder Jefferson, who coached in the same capacity for the Detroit Lions and, most recently, the Tennessee Titans following a 13-year playing career.

“It was very beneficial to me,” the younger Jefferson said of his father’s influence. “Being around those NFL guys, learning how they work and what they do, was helpful to me. You see how they work. To have a dad teaching you that kind of stuff is very helpful to come into college and play at the SEC level.”

Jefferson, who ultimately picked Ole Miss over Georgia and Michigan during an intense recruiting battle last year, had a game that was more technically advanced than most players his age as well as the size (6-foot-2) and speed to contribute immediately, but the combination of talent and depth Ole Miss already had at the position didn’t make it possible. The former four-star prospect took a redshirt he didn’t see coming.

“Coming in, I really didn’t expect to redshirt,” Jefferson said. “I was really disappointed, but with prayer and God being on my side, I just waited it out. I knew God was telling me to be patient. It was all worth it.”

But Ole Miss’ coaches knew they had a player whose background made him wise beyond his teenage years, and the tutelage of his father continues to show.

Jefferson is often praised for the crispness with which he runs his routes, something he said his dad has instilled in him over the years. While some of the intricacies of the Rebels’ spread offense are taking some getting used to, Jefferson understands better than most young receivers how to alter those routes based on the coverage.

“I think he probably understood schemes better than most, and route running obviously,” offensive coordinator Dan Werner said. “He had been coached when he was young. But we do so much different stuff than probably what he’s used to. It’s a little different, but he definitely came in ahead of most freshmen.”

Jefferson used the year away from the field to add some bulk to his frame. Jefferson arrived on campus last summer at 170 pounds and is listed at 181 on Ole Miss’ spring roster, but he said he’s now pushing 190 pounds and playing with a better sense of urgency.

“(Wide receivers) coach (Grant) Heard is always on me about playing fast,” Jefferson said. “Last year doing scout team, I wasn’t running fast, but I’ve learned you’ve got to play fast in the SEC. Coach Heard has been harping that on me. I’ve improved with that.”

Laquon Treadwell and Cody Core are both gone, but Jefferson still has plenty of competition for snaps come the fall. Damore’ea Stringfellow and Quincy Adeboyejo have been running with the first team this spring with Markell Pack, Derrick Jones, Trey Bledsoe and DaMarkus Lodge also back, and three highly regarded freshmen will join the fold this summer in D.K. Metcalf, A.J. Brown and Tre Nixon.

But Jefferson is squarely in the mix.

“Coming into this spring, my mindset was to come in and have a good spring and make some things happen,” Jefferson said. “I’m just enjoying it right now. Just keep competing.”