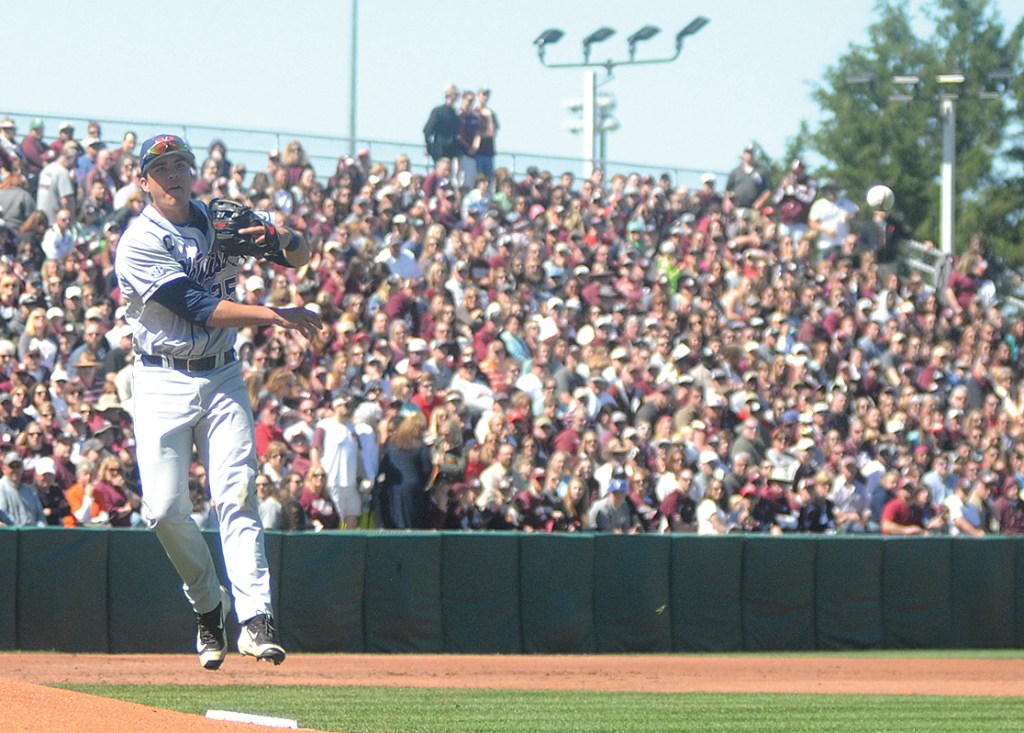 STARKVILLE — If it was going to right the ship and end a four-game losing skid, the Ole Miss baseball team was going to need its bats to come alive and a solid outing from starter Chad Smith.

No. 5 Mississippi State defeated the 13th-ranked Rebels 6-2 on Saturday at Dudy Noble Field, claiming the series and sending Ole Miss to its fifth straight loss. The Rebels will try to avoid their second consecutive Southeastern Conference sweep today with first pitch set for 1:30 p.m. (SEC Network+).

It is also the second straight SEC series dropped by the Rebels (20-7, 2-6 SEC) after winning the opening series against Tennessee, losing six of their last nine games.

After lasting 4.2 innings against South Carolina, Smith was not able to make it out of the second inning in his third career SEC start. The right-hander lasted one out into the second frame before being relieved by Brady Feigl. Smith gave up four runs, all earned, on five hits while issuing one walk and striking out one Bulldog batter.

A one-out home run by right fielder Jake Mangum gave the Bulldogs (20-7-1, 6-2) an early 1-0 lead in the first inning. Things did not go as well for Smith in the second frame, giving up three runs on four hits. He also hit a batter and issued a walk, bringing home runs with the bases loaded each time.

“After the first inning, even with Mangum’s home run, I thought it was a good inning for him,” Ole Miss coach Mike Bianco said. “His stuff looked good. He threw all three pitches in the first inning, which was a first. Then he came out the next inning, and you got to hand it to (Mississippi State). They’re able to compete. Even with two strikes and even when it’s not pretty, they don’t strike out and they put the ball in play.”

With a 4-0 lead after two frames, it was all Mississippi State starter Austin Sexton needed. The junior pitched a complete game, his second of the season, and gave up only four hits and two runs, which were unearned.

Sexton allowed only one hit through the first seven frames, a two-out Tate Blackman single in the first inning. He also held the Rebel offense scoreless until the eighth inning. Ole Miss finally got on the board with two runs on three hits and one Bulldog error by Mangum when he collided with center fielder Jacob Robson for a fly ball.

“We’re not going up there swinging with confidence,” outfielder J.B. Woodman said. “We faced a good arm, but we didn’t hit him hard enough. I think we got the talent and stuff to beat these guys, but we got to show it.”

Blackman finished 2-for-4 with an RBI with first baseman Will Golsan responsible for the other RBI off Mangum’s error. Woodman and pinch hitter Cameron Dishon went 1-for-4 at the plate.

Dakota Hudson was electric on the mound for Mississippi State, and the Rebels never had a chance, dropping the first game of the series, 3-1.

Base running was the story of the game as Ole Miss squandered chances by being picked off in scoring position while key base running by the Bulldogs spelled success. Mangum scored from first base after a pickoff attempt by Will Stokes went awry to make for the winning margin in the eighth inning.

Hudson worked a complete game, allowing only one unearned run and striking out 11. In the other dugout, Brady Bramlett (5-1) gave Ole Miss 5.1 innings of work but earned his first loss of the season, allowing six hits and two earned runs.