Rebels in 4th after 2nd day at Intercollegiate 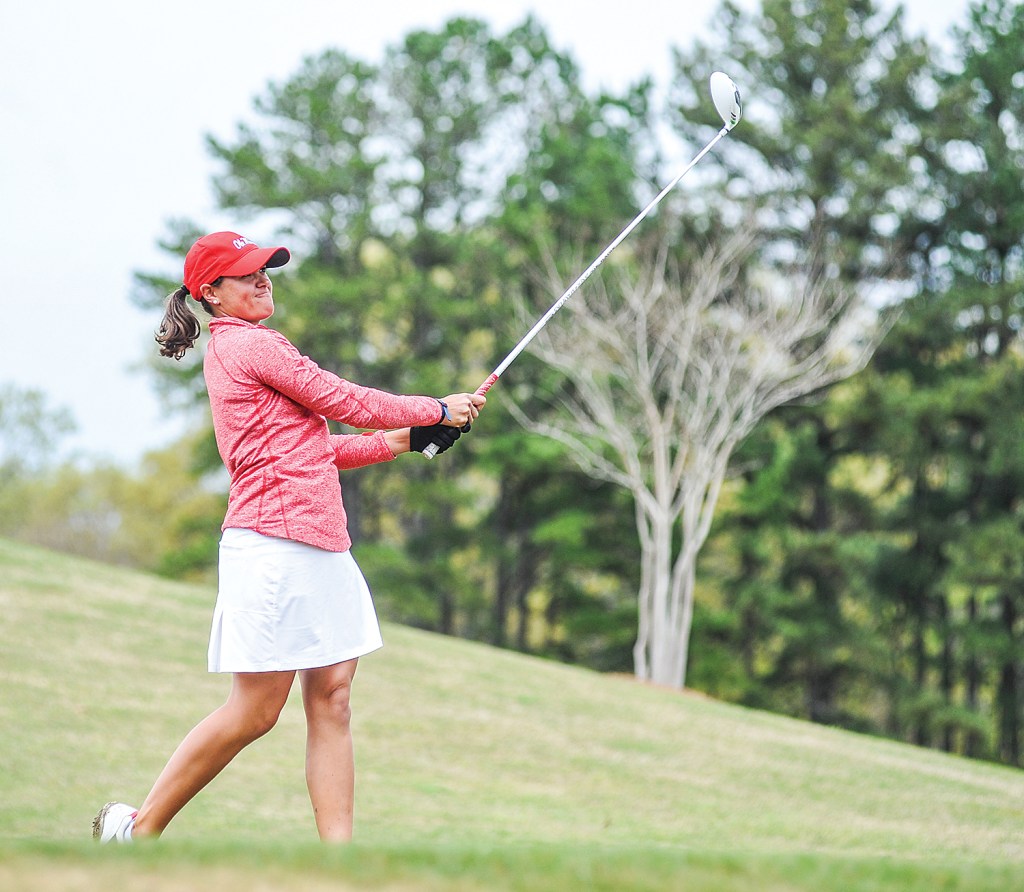 Ole Miss’ Alison Hovatter tees off on the 10th hole at the Rebel Intercollegiate at the Ole Miss Golf Course on Friday. The Rebels head into today’s final round in fourth place. (Bruce Newman)

The Ole Miss women’s golf team had another good day on their home course on Saturday, moving into fourth place in the standings after the second day of play at the Rebel Intercollegiate at the Ole Miss Golf Course. Troy remained in the lead while East Tennessee and Harvard are in second and third place, respectively.

“I think the team played well today,” head coach Kory Henkes said. “It was a tough day out there though with a lot of wind. I’m proud of the girls for hanging in there and posting our best round so far for the tournament.”

Junior Madisen Bentley (University Place, Wash.) posted the best score for the Red and Blue with an even-par 72. She fired four birdies and was helped by a 2-under par back nine.

“Today I really just focused on hitting one shot at a time and committing,” Bentley said. “I left a lot on the greens but have a lot of positives going into tomorrow.”

“Madisen played great today,” Henkes added. “She’s a little disappointed because it was one of those days where she probably could have shot a 67 but the putts just weren’t falling. Overall I know she’s pleased with it, and you can’t be mad when you shoot a 72. There were a lot of good things from her with her striking and making some putts down the stretch that she needed to make.”

Junior Maria Toennessen (Grimstad, Norway) had another solid day as well, firing a 2-over par 74. She carded three birdies on the day and posted an even-par 36 on the back nine.

Senior Alison Hovatter, who’s playing in her final Rebel Intercollegiate, is excited to get back out on the course Sunday in front of the Ole Miss fans.

“It goes by so fast,” Hovatter said. “I just want to enjoy it and have fun tomorrow, and play with purpose to honor God. It means a lot to have all this support, and it’s just a different atmosphere for this tournament. We’re excited to play for the Ole Miss crowd and show them what we have.”

“It’s a little bittersweet for our three seniors, but they’re excited to play tomorrow,” Henkes said. “It’s always sad when it’s your last home event, and also the last regular season event for these girls. It’s the last time they’ll play the Ole Miss Golf Course in their Rebel uniform, but we are proud of everything they’ve done in their four years here at Ole Miss.”

The Rebels hit the course again today at 9 a.m. in a shotgun start and the event is open to the public.

“We definitely have a chance at making a run at it tomorrow,” said Henkes. “We just have to make a few less mistakes than we did today. Sometimes we like to turn a birdie opportunity into a bogey, so if we can cut some of that out it should be a good day.”

For more information about this year’s tournament visit tournament central and remember fans can follow along via BirdieFire and on social media by using #RebInt16.