Shankle is now known as ‘the lamp man’ 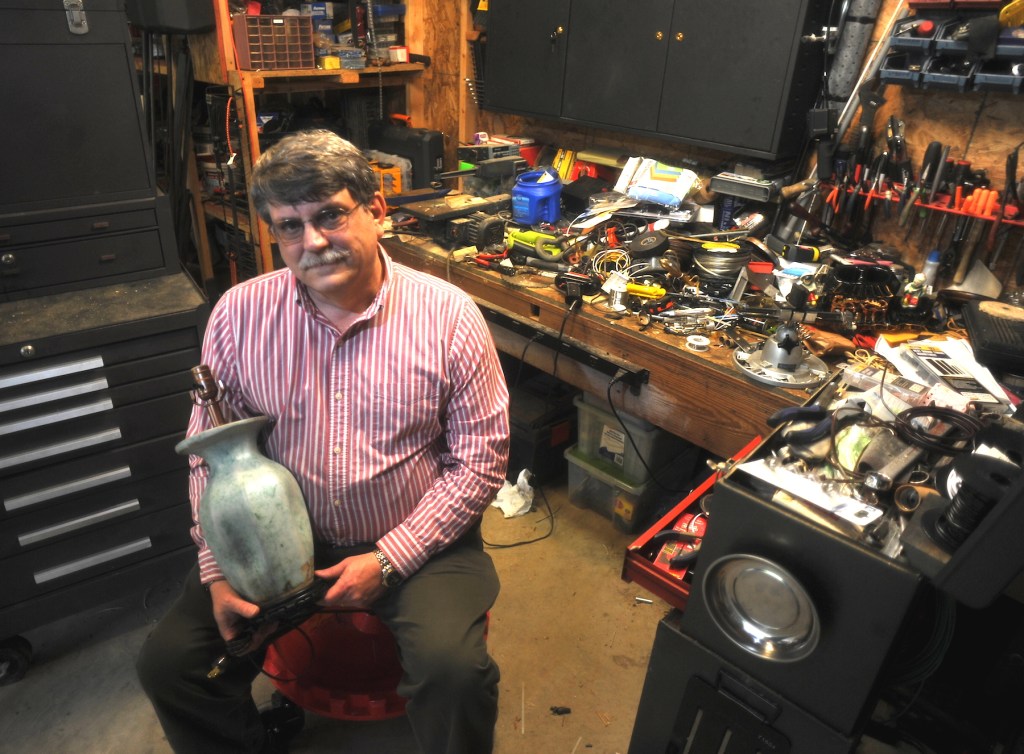 William Shankle, known as "the lamp man", holds a lamp he repaired in his workshop, in Oxford, Miss. on Wednesday, March 30, 2016.

William Shankle works at North Mississippi Regional Center in the business office doing accounts payable work. At least, that’s what he does during the week.

But each night, he drives home to his house off Highway 30. You can’t miss his home — hanging from his mailbox is a small chandelier.

Outside of NMRC, Shankle is known as “The Lamp Man.”

Shankle learned about basic electrical wiring in a class at high school and the rest he just learned over time.

“I’ve always been handy with anything mechanical and electrical,” he said. “Most times I can figure out what a problem is. Lamp wiring is really not too awful to learn.”

A few years ago, a friend stopped by his house with an odd question.

“She asked if I thought I could wire a lamp for her,” Shankle said. “She wanted to take it apart and paint the outside and for me to replace the inside and put it back together.”

He did what she asked and she was pleased with his work. So much so, she started to spread the word and he started getting lamp wiring jobs from businesses all over Oxford. He redid the lighting at Curtis Knight’s shop on the Square until it closed.

“I had done some work for other folks through him and it just sort of grew from there,” Shankle said.

Shankle, 55, repairs lamps, whether it’s the plug or the insides that need replacing. He can also rewire chandeliers. One of his most challenging jobs was rewiring a chandelier in the parlor at the Cedar Oaks mansion. It was originally a gas fixture and had been converted to electricity.

Dianne Fergusson, with the Cedar Oaks Guild, said the lamp was in hundreds of pieces when they handed it over to Shankle to repair and put back together.

“I asked if anyone had a picture of what it was supposed to look like but no one had one,” Shankle said. “So I just put it together myself.”

The job took about three months. Shankle individually wired 300 crystals back onto the chandelier.

“Thanks to William’s talent and skill, we have an authentic period piece to light our parlor,” Fergusson said.

Shankle also repaired the antique front porch light at Cedar Oaks and a 100-plus year old handmade lamp for Fergusson herself.

Shankle and his wife, Edwina, have donated several period-authentic pieces to the Cedar Oaks collection. He also restored a crystal lamp for Mayor Pat Patterson that was an old family heirloom.

Shankle’ family moved here in 1980 and he joined them in 1984 after graduating from college with a business degree. A few months later he was hired at NMRC.

Born color-blind, he has to double check colors when working with his lamps. He also can make a lamp out of almost anything — and has.

“I had one woman ask me to make a lamp out of an oil rag can,” he said with a chuckle. “I’ve made from a garbage can one time. That was kind of interesting.”