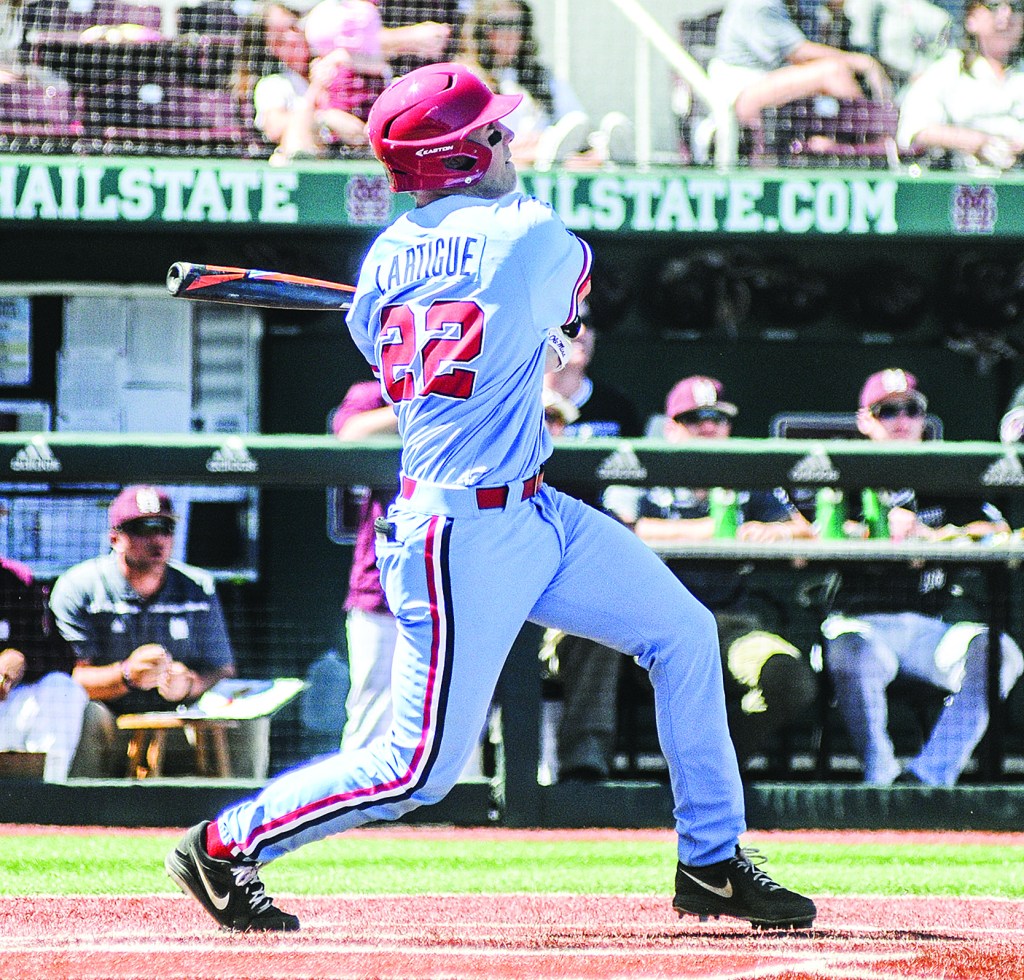 Ole Miss’ Henri Lartigue hits a home run during the second inning of Sunday’s game against Mississippi State at Dudy Noble Field in Starkville. The Rebels avoided the sweep with an 8-5 win.

STARKVILLE — The bleeding was stopped, at least for a day, as the Ole Miss baseball team ended a five-game losing skid in the Southeastern Conference and held off a Mississippi State rally for an 8-5 win at Dudy Noble Field on Sunday.

It allowed the No. 13 Rebels (21-7, 3-6 SEC) to salvage the series and avoid back-to-back SEC series sweeps while entering the win column for the first time since March 22.

The starting pitching woes did not subside for Ole Miss though as starter Sean Johnson did not make it out of the fourth inning. The right-hander was making his return to the rotation after sitting last weekend against South Carolina to rest his surgically repaired arm.

Johnson went three-plus innings, facing one batter in the fourth, before Wyatt Short replaced him. The junior gave up two earned runs on three hits while walking three and striking out one.

“He was struggling a little bit with his fastball command,” catcher Henri Lartigue said. “His breaking stuff is really good, so he’s got to get it to counts where he can use his breaking stuff. But I can’t be more proud of the way Sean competed today.”

Ole Miss got on the board first with its first earned runs of the series coming off a Colby Bortles RBI single in the first inning and a solo home run by Lartigue, his second of the season.

After watching the first two Mississippi State starters pitch complete games to begin the series, the Rebel offense jumped on starter Daniel Brown quickly, who was removed from the game after the Lartigue home run.

Bortles was not finished at the plate as he extended his RBI total to three after a double in the fifth inning plated Ryan Olenek and Tate Blackman for a 4-2 lead after Mississippi State (20-8-1, 6-3) tied things up in the bottom of the second. The third basemen went 2-for-4 on the day with the three RBIs.

Lartigue came up big in the eighth inning with a two-RBI single with the bases loaded, giving Ole Miss a much needed cushion with the winning margin. He finished a triple shy of the cycle, hitting 3-for-5 with three RBIs.

“I was seeing it good,” Lartigue said. “I had plenty of help from teammates and coaches, getting me ready for each at-bat. I think before my home run (Ole Miss) coach (Mike) B(ianco) and (hitting) coach (Mike) Clement said that Brown was really only commanding to his glove side, so he was coming in to right-handed hitters. They said look out for a fastball, and I got one.”

Rally snuffed
Short worked four-plus innings, but in the eighth, he struggled and gave up two home runs, a solo and a two-run shot, to allow Mississippi State to come back to within one run. Bianco turned to David Parkinson, who worked his way out of the inning and avoided the Bulldogs to tie up the game.

Parkinson and Will Stokes worked two innings of scoreless one-hit baseball with Stokes earning his third save while Short improved his record to 2-1.

“David’s been terrific for us all year long,” Bianco said. “Him and Stokes a lot of times, kind of all under the radar. The bullpen has just been outstanding. It’s one of the reasons you can bring a guy like Wyatt in during the fourth inning because you have guys on the back end that can really finish for you.”

Ole Miss will head to Pearl on Tuesday for its first of two games at Trustmark Park this season as the Rebels take on Southern Mississippi at 6:30 p.m.