The Midtown Men coming to Oxford 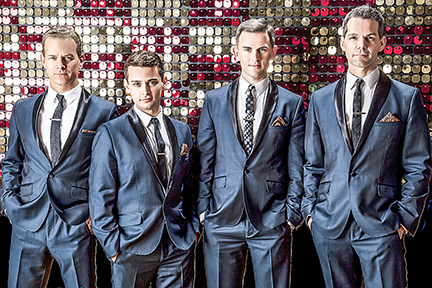 Submitted The Midtown Men will perform at the Ford Center Friday at 7:30 p.m.

A collection of vocal talent that has thrilled audiences across North America is coming to the University of Mississippi when The Midtown Men, featuring four stars from the original Broadway cast of “Jersey Boys,” perform at the Gertrude C. Ford Center for the Performing Arts.

The group’s sixth national tour visits the Ford Center for one show at 7:30 p.m. Friday. Tickets are $55 for balcony level, $61 for mezzanine and box tier 2 and $66.50 for the orchestra/parterre level and box tier 1. They can be purchased at the UM Box Office inside the Ole Miss Student Union or online at www.fordcenter.org/.

“I have seen ‘Jersey Boys’ five times and can personally attest to the fantastic musical experience of this Broadway show,” said Julia Aubrey, the Ford Center’s interim director. “I look forward to having the opportunity to see The Midtown Men that features the stellar singer-actors that made ‘Jersey Boys’ such an amazing success.”

Besides stage appearances, the group has appeared on television on “Good Morning America,” “Access Hollywood,” “Katie” and “The Chew.”

The Midtown Men also has collaborated with rock ‘n’ roll icons. For its first radio single, “All Alone on Christmas,” the group collaborated with Stevie Van Zandt and members of Bruce Springsteen’s E Street Band.

This new production with top-notch choreography and vocal performances will thrill the Oxford and Ole Miss community, Aubrey said.

The Midtown Men is not a performance of, nor is affiliated with, the show “Jersey Boys.”