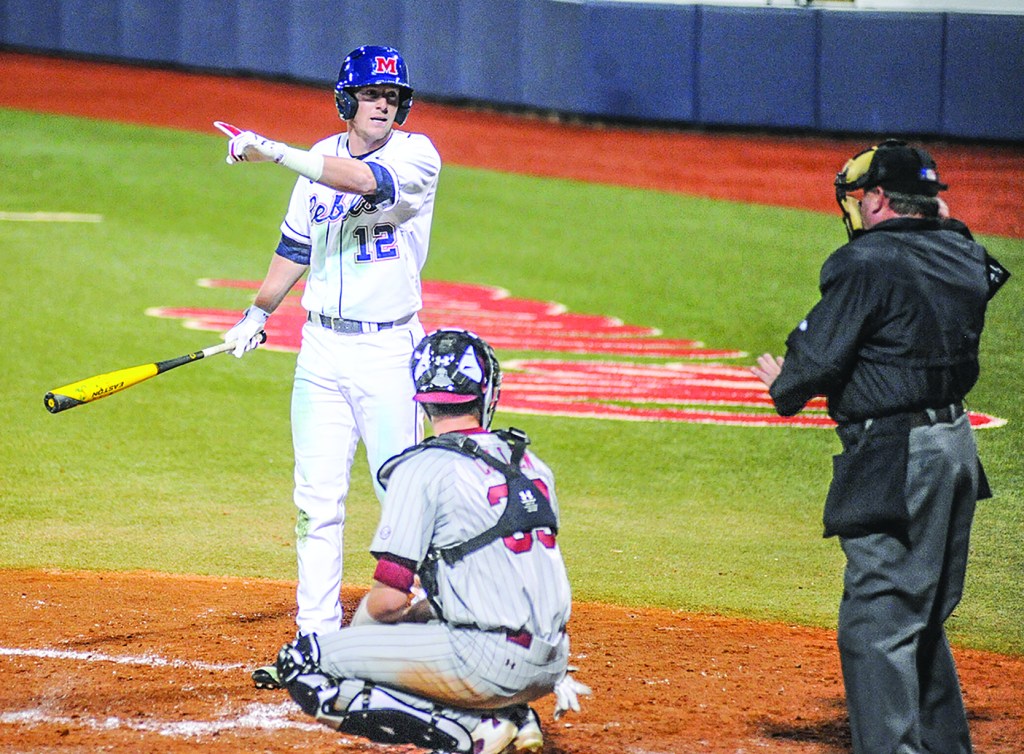 Ole Miss junior outfielder J.B. Woodman (12) and the rest of the Rebels are looking for their collective stroke after hitting a combined .205 in their last two series against South Carolina and Mississippi State.

The past two weekends have not been pleasant for the Ole Miss baseball team to say the least.

Being swept by South Carolina at home followed by dropping a series to rival Mississippi State last weekend on the road has the No. 14 Rebels trying to right the ship after a program-best start to the season.

Sunday’s win against the No. 5 Bulldogs in the series finale was a good start.

After getting dominated by Mississippi State starters Dakota Hudson and Austin Sexton, who pitched complete games on Friday and Saturday, respectively, the Ole Miss offense woke up.

Scoring at least a run in six of the nine innings, the Rebels knocked around starter Daniel Brown, who didn’t record an out in the second inning before exiting the game, as well as the five Bulldog pitchers they saw out of the bullpen for 10 hits. They recorded eight hits in the first two games combined.

Ole Miss (21-7, 3-6 Southeastern Conference) also did not score an earned run until Sunday off of Brown as the first three runs of the weekend were unearned.

“You can credit (South Carolina and Mississippi State), but I think it was more about us,” Ole Miss catcher Henri Lartigue said of the recent offensive struggles after Sunday’s win. “I think we got to get back to having quality at-bats. You can control having a quality at-bat, but you can’t control having a hit. It’s really nice to see guys compete (Sunday).”

Those quality at-bats have been few and far between during the past six SEC games, minus Sunday’s performances at the plate. Against South Carolina and Mississippi State, the Rebels struck out a combined 52 times against the Gamecocks and Bulldogs while hitting 41-for-200 (.205 batting average) at the plate.

“Just battling your butt off and going up there and refuse to get out, refuse to strike out,” outfielder J.B. Woodman said when asked how to compete better at the plate. “We aren’t doing that right now. We used to do that, so we need to get back to doing that.”

Before the win on Sunday, Ole Miss had lost five straight and all five of those were in SEC play. Being able to end the skid and get the taste of losing out of their mouths for the first time in nearly two weeks was a welcomed sight to the Rebels. Knowing how to keep it going is a mystery in itself.

“I wish I knew the answer, we all do as coaches,” Ole Miss coach Mike Bianco said after Sunday’s game. “One of the things you keep going back to is we are a good team. We played a bunch of good games up until about a week ago and kind of hit a little bit of a skid. Once it looked like somebody broke the ice, it looked like we were being back to normal.”

After a trip to Pearl tonight at Trustmark Park against Southern Mississippi (6:30 p.m.), the Rebels will play three of their next four SEC weekend series inside the friendly confines of Swayze Field, starting with Arkansas on Friday night.