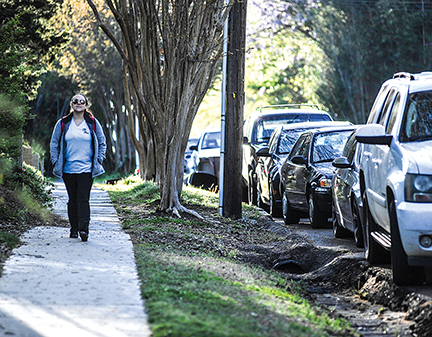 Students parking in residential areas close to campus has become a problem since the University of Mississippi limited on-campus parking, and Mayor Pat Patterson recently asked the Downtown Parking Advisory Commission to help come up with a solution.

“We’re getting a lot of pressure from the residents, and rightly so,” he said Friday.

“We’ve been kicking everything around, from going to a permit system to putting meters in,” Patterson said. “Meters didn’t seem appropriate, however.”

Patterson asked commission members to drive along those streets and see if they could come up with any ideas.

A residential parking permit system would have those who live on the streets attach a permit to their vehicle. Any vehicle found without a permit could be ticketed. Another idea was to implement a two-hour parking limit during the day which could move vehicles around more frequently but not necessarily stop students from parking along the streets and could upset those living in the neighborhoods.

Parking is allowed on one side of the street in most residential neighborhoods.

Patterson said he and Parking Director Matt Davis recently watched the students parking on the streets and estimated that 40 percent are parking all day.

“I stopped one young man and asked why he was parking there and he said there was nowhere else to park,” Patterson said.

Mike Harris, director of parking and transportation for Ole Miss, said that’s not true and it’s more likely students are parking on the streets to avoid paying for a parking permit. The university has two park-and-ride lots — one at the Jackson Avenue Center and one at the South Lot off Old Taylor Road, which has 300 empty spaces on most days.

“So there is availability, but maybe not in an area they find the most convenient,” Harris said.

A park-and-ride permit costs $80, half of the cost of on-campus parking.

About 400 residential students now park in the Whirlpool parking lot and are shuttled to campus on Oxford University’s Silver route during the day, with an on-call van shuttle available overnight. Once a new residential hall parking garage in built in fall 2017, the Whirlpool lot will become the university’s third park-and-ride location, which has a capacity of more than 1,000 parking spaces.

“I know you’re charged with downtown parking around the Square, but if you have ideas, we’d welcome them,” Patterson told the commission members.

Also at the meeting Friday Davis reported downtown parking meters brought in $53,137 during the month of March with 52.12 percent in coins and 45.83 percent from credit/debit cards. About 3 percent of the income came from people using the mobile parking app, Passport Parking, which is the highest it’s been since the app was available in September. Expenses for March were $13,837.

Parking officers issued 416 tickets, down from the monthly average of 497. Davis said more people are becoming compliant and using the meters, which will result in less overtime parking tickets.