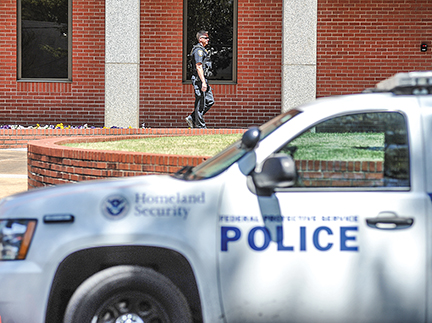 Bruce Newman An officer walks outside of the federal courthouse on Jackson Avenue in Oxford during the day’s trial.

“These men had been dealing with each other for years,” said Scott Leary, assistant U.S. Attorney, to a jury seated mid-afternoon Monday.

In his opening statement, Leary told them to expect to hear about narcotics trafficking “from Jackson and ultimately from California … all while these men were incarcerated.”

On trial are Frank George Owens Jr. of D’Iberville and Eric Parker of Petal, the last two defendants of 17 indicted in April 2015 from a two-year investigation by the Drug Enforcement Administration.

They are accused — as members of the white supremacy Aryan Brotherhood of Mississippi — of their part in a methamphetamine distribution conspiracy, as well as in the death of Michael Hudson in south Mississippi.

They pleaded not guilty, while their co-defendants have taken government deals for their guilty pleas and possible testimony in this trial, expected to last three or four weeks.

Defense attorneys told the jurors the government can’t prove what it says it will.

“Every person who will testify, except law enforcement, has something to gain and is an addict,” said Parker’s attorney, Joshua A. Turner of Oxford. “Evidence that exists in this case will create a severe amount of doubt about the elements of this crime, starting with venue — where is Michael Hudson? There is no body.”

William Andy Sumrall of Jackson, representing Owens, said to the jury, “Is Frankie Owens a member of the Aryan Brotherhood? Yes, he did what he had to do to survive.”

But Owens was “not in any position of authority” in 2013 to have ordered anything like the murder of Hudson, Sumrall insisted.

Leary said evidence will show a conspiracy within the Mississippi prison system via illegal cellphones to control meth traffic and other gang-related activity.

He said the first two weeks of the trial will focus on the two-year investigation about meth and gun trafficking, as well as a Marshall County prison facility stabbing of a man name Jeremy Bailey.

Then, he said the testimony will move back to 2010 for actions leading up to the murder of Hudson.

“Michael Hudson also was in the Aryan Brotherhood, but he made the mistake of his life,” Leary said. “He bought meth from Eric Parker, he didn’t like the quality so he didn’t pay him.”

Leary insisted that Owens ordered Hudson to be beaten, kidnapped and then murdered — his body burned over a five-day fire and then dumped somewhere in south Mississippi.