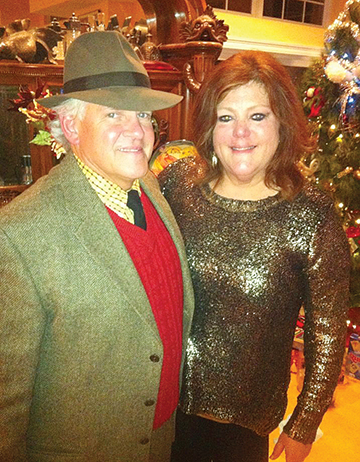 Submitted Ron and Becky Feder made the largest individual contribution ever to the Thacker Mountain Radio program. Becky Feder died suddenly in 2015.

The Thacker Mountain Radio Hour, the long-running, Oxford-based literary and music program on Mississippi Public Broadcasting, has announced it will receive a $25,000 donation from the Ron and Becky Feder Charitable Foundation for the Beaux Arts of Ocean Springs. The gift is the largest individual contribution ever made to the radio program.

“We are thrilled,” said Thacker producer, Kathryn McGaw York. “The show is nearing its 20th anniversary (in fall 2017). This generous donation will allow us to keep our momentum. We’re very humbled and thankful to the Feder Foundation.”

The money will be allocated over a period of 10 years. Foundation president Feder said the 10 years will allow Thacker producers to do long range planning. He also hopes to challenge other donors to help the show with sustaining dollars.

“First, the idea of a 10-year commitment, is to develop a sustaining fund that will allow TMR directors to develop a strategic plan,” Feder said, “which by definition means long term planning. My gift is a challenge to other like-minded Thacker supporters who want the show to expand its audience in Mississippi, the regional South and more.”

Feder is a 1974 undergraduate of the University of Mississippi and 1981 UM Law School graduate who continues to own a home in Oxford. His wife and foundation partner, Becky, died suddenly on Oct. 28, 2015. Feder recently joined the Thacker Mountain Radio Board of Directors and decided to make his foundation’s donation in his late wife’s honor.

“Part of my motivation is to honor the memory of Becky who made TMR’s annual show in Ocean Springs become reality. She was a huge fan of the show and particularly loved the Ocean Springs show and reveled in every packed house each year. The following week she would strut and tell her pals, “Yeah, I did that!”

The radio show kicked off its spring season this February in Oxford with upcoming shows to include special music and book-themed programs and an outdoor performance for Oxford’s Double Decker Festival. The show will take its blend of “Live Literature, Live Music” on the road this summer for shows in Cleveland, Clinton, Clarksdale, Tupelo, Jackson, the Neshoba County Fair, and, of course, Ocean Springs.

The program was picked up for statewide broadcast in 2001 on Miss. Public Broadcasting and can now be heard on radio and online as well. In 2005, TMR won the Governor’s Award for Broadcast Excellence.