Square to be bare for now 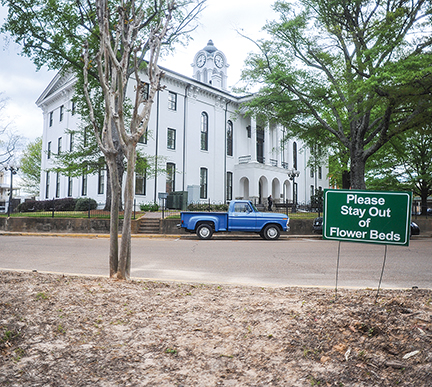 Bruce Newman Flower beds on the Square will remain empty until after the Double Decker Arts Festival.

Springtime in Oxford is usually a time when the downtown Square looks like an artist took brush to canvas and painted brightly colored flowers on every corner.

However, folks on the Square may have noticed recently that things are looking kind of brown.

Last week’s high winds and heavy rains wreaked havoc on the red, yellow and white tulips that the Oxford Building and Grounds crew painfully planted in the early days of spring.

“The tulips started looking pretty bad,” said Buildings and Grounds Superintendent Billy Lamb Tuesday. “So we had to pull them up.”

With the city’s largest festival right around the corner, Lamb said the flowerbeds around the Square would remain bare until after the Double Decker Arts Festival on April 22-23. Lamb said there’s little reason to plant new flowers in the beds when crowds of 60,000 will just damage them.

“People just walk all over and trample them,” he said of the flowers.

After the crowds have left the city, Lamb said the Square would once again be dotted in an array of colors. He said he plans on planting some dragon wings and begonias.

“The dragon wings hold up real good in the heat,” he said. “And we’ll have some nice colors with the begonias.”