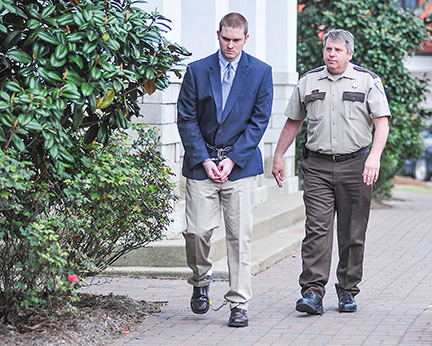 Bruce Newman Derrick Boone, left, is escorted into the Lafayette County Courthouse this morning. Boone is on trail, charged with capital murder in the death of Zacharias Hercules McClendon.

Jury selection has been completed in the trial of one of three men charged with shooting and killing a University of Mississippi graduate student.

Derrick Boone, 25, of Laurel, was arrested in 2013 along with Steven Wilbanks, 24, of North Carolina, and Joseph Lyons, 22, of Houston, Texas, for the alleged murder of Zacharias Hercules McClendon of Gulfport. The three were charged with capital murder.

Opening statements began about 9 this morning at the Lafayette County Courthouse.

According to court documents, the three defendants lived next door to McClendon, who was shot and killed with a 16-gauge shotgun. The state claims after the killing the three men then took McClendon’s 2004 Nissan and three college textbooks worth about $500. They then reportedly parked the car at the Chevron gas station on Highway 6 near Thacker Heights Drive.

Boone’s attorneys claim their client was not in the room when McClendon was shot and should not be charged with capital murder.