Adeboyejo getting physical this spring 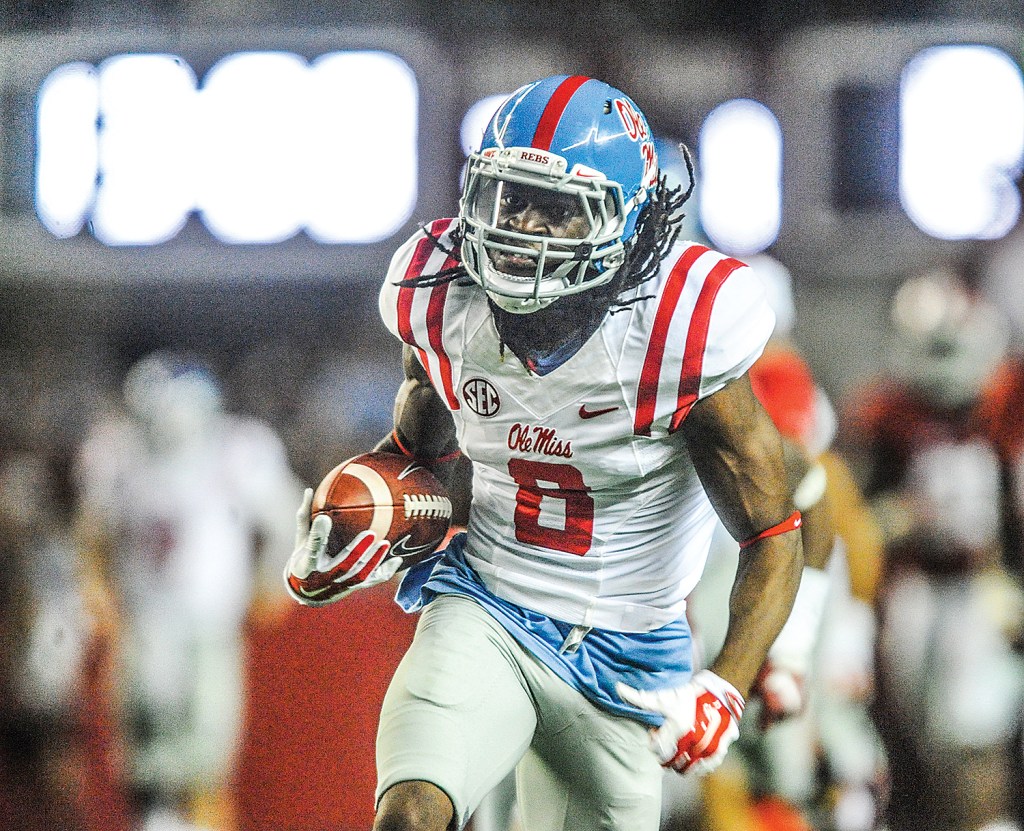 With the loss of two of Ole Miss’ key targets out wide, Quincy Adeboyejo is working on becoming a more physical threat in the receiving corps. (Bruce Newman)

Quincy Adeboyejo has specialized as a speedy slot receiver his first three years at Ole Miss. Now he’s trying to round out his game heading into his final season.

Adeboyejo has been working inside and out this spring with the departures of Laquon Treadwell and Cody Core, who are both preparing for this year’s NFL Draft. Speed has been the rising senior’s signature trait since signing with the Rebels out of Cedar Hill (Texas) High in 2013, but Adeboyejo, now the most experienced receiver on the roster, could shift to the outside at times in the fall to help fill the production left behind by Treadwell and Core, who combined to catch 119 passes for 1,797 yards and 15 touchdowns a season ago.

The 6-foot-3, 195-pound Adeboyejo had 604 receiving yards and was second to Treadwell in touchdown receptions (7) last season, but it’s what Adeboyejo is doing without the ball in his hands this spring that’s been his primary focus as he prepares for the possibility of an even bigger role come the fall.

“Just one thing I’ve really been trying to work on is being more physical,” Adeboyejo said. “I’ve been playing not only inside but also trying to get some work on the outside. That calls for you got to be more physical blocking on screens and stuff.”

Adeboyejo had an example to go by the last few seasons in Treadwell, whose crunching blocks downfield became just as common as a touchdown catch. But Treadwell played anywhere from 210 to 230 pounds during his career while Core also weighs more than 200 pounds, bodies more equipped to take on bulkier linebackers and defensive backs.

“It is a mindset, and when I first got out there (this spring), I really didn’t know how physical you actually had to be,” Adeboyejo said. “I got pushed around a few times. I had to come out there with a different mindset and block harder than the first days I was out there.”

Adeboyejo said his attempt to pack on pounds “hasn’t really been working,” but he’ll continue to try to bulk up this summer with a specific weight in mind that won’t interfere with his biggest asset.

“That’s one thing I’m going to try to do is to get up to 205,” Adeboyejo said. “I’ve never been there, so I don’t know what it’ll feel like, but I’m pretty sure I’ll be able to sustain my speed.”

Most of the intense blocking for receivers in the Rebels’ offensive scheme comes on bubble screens, and it’s “always a crucial block” that turns out to be the difference in a short play and an explosive one, receivers coach Grant Heard said. Adeboyejo has to make up for his lack of bulk with sound technique, something he’s continuing to hone as he attempts to morph into a complete receiver.

“He’s really worked on it because when he first came in, blocking was not his deal,” Heard said. “It wasn’t. He just wanted to catch balls. He’s taken on the role of trying to do it, and he’s doing a heck of a job right now.”