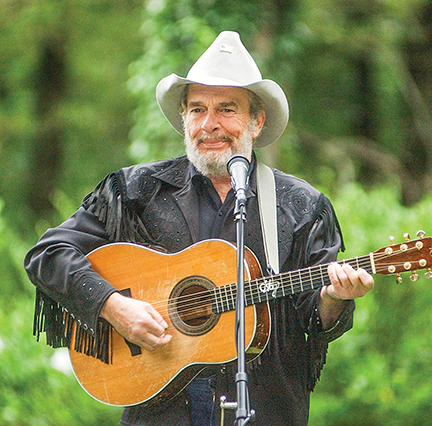 “Not exactly,” Khayat remembered Wednesday after the news that Haggard had died on his 79th birthday.

Haggard’s recollection of the Nobel-winning Oxonian referenced one of Faulkner’s books, “Absalom, Absalom,” a tale of a poor West Virginia man who comes to Mississippi to gain wealth and lead his family to prominence.

Khayat, now retired from the university post he held for 14 years until 2009, remembers conversations with Haggard on two occasions. The first was at Faulkner’s home Rowan Oak, on June 1, 2003, when he and fellow performer Mississippian Marty Stuart hosted a news conference in front of the famous dwelling to announce a nationwide “Electric Barnyard Tour” The second was a brief “hello” in 2012 when he ran into Haggard at the Country Music Hall of Fame induction of Stuart’s wife, Connie Smith.

In Oxford, he said, he and Haggard walked around to the side of Rowan Oak while everyone else was chattering in the front yard.

“He was so curious about who this Faulkner fellow was,” Khayat recalled. “Years later, Marty said Merle called him one night from somewhere like Minnesota to ask him where that big ole white house was in Mississippi.”

Stuart reminded him it was in Oxford.

“You reckon they’d sell it to me?” Haggard said.

When asked Wednesday, Khayat took a minute to consider what his favorite Haggard song is, first saying he had about 10 favorites.

“But, you know, I really love ‘If We Make It Through December,’” he said.

Khayat assessed Haggard to be “a real working man; a wonderful, dedicated performer.”

“You know, that’s so many nights on the road – you’ve got to really love it and love your audiences.”