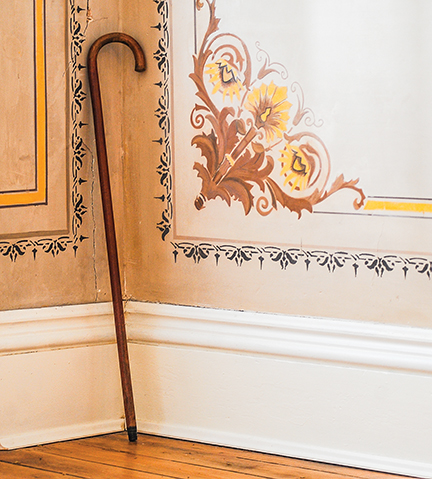 Bruce Newman A cane reportedly belonging to LQC Lamar is now at the LQC Lamar House.

Another addition has been made to the L.Q.C Lamar Museum as a descendent of the late Mississippi senator donated a walking cane to be displayed at the exhibit. Lucius Lamar – whose bloodline traces to L.Q.C.’s brother and former President of the Republic of Texas Mirabeau Buonaparte Lamar — has been in possession of the cane since his mother, Patricia Lamar, passed away.

Lamar splits his time between Taylor and San Francisco, where he owns Rebel art space, a modern art gallery. His parents were given the cane by Adeline Houston, who owned the L.Q.C. Lamar House for decades until it was donated to the city of Oxford. The cane was displayed prominently at Lamar’s parents’ home, and now Lamar said it’s time for it to return to its proper resting place.

“Mrs. Houston lived in the Lamar house and had a number of artifacts that she gave to my mom,” he said. “I just thought it was appropriate that it returned home.”

One of the artifacts given to Lamar was an engraved internment invitation to L.Q.C. Lamar’s funeral. Lamar died in 1893, almost five years to the day after he was appointed by President Grover Cleveland to the Supreme Court, the only Mississippian to be bestowed such an honor. He was originally interred in Macon, Georgia, not far from his Eatonton birthplace or Vineville, where he died. Later he was reinterred in Oxford at St. Peter’s Cemetery.

Museum project manager Darlene Copp has admittedly read up on and studied the life of the former politician. She said that while Lamar had health problems, it was likely the cane was used more in a fashion sense than by necessary means.

“It was typical for men in the nineteenth century to use canes,” she said. “While he had some health issues, he didn’t have any walking problems that I am aware of. It was more just part of the 19th century garb of men.”

Copp said the exact spot of where the utility cane will be displayed has yet to be determined. The accessory could become mobile, however, as the museum is working on an actor to don the appearance of the late Lamar. It is still in flux what the role of, or appearance schedule of the acting L.Q.C. Lamar will be once the cane hits to the streets once again.