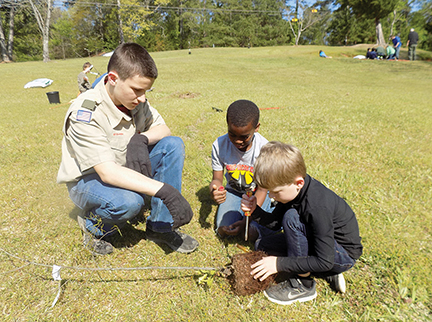 It was a win-win situation for both Oxford and a local Boy Scout working on his Eagle Scout project Saturday morning.

Robinson is the recycling coordinator for the city of Oxford and heads up Keep Oxford and Lafayette County Beautiful. She knew the Oxford Tree Board had a large tree-planting project coming up and needed volunteers.

“I just put them together,” Robinson said. “James did the rest.”

Cowan Hunter, co-chairman of the Oxford Tree Board said the board had working on its Oxford Re-Leaf Campaign and had 40 trees to plant, which includes several varieties of trees including river birch, pin oaks, willow and maple.

Jubera gathered up about 30 volunteers from his Boy Scout Troop 144 and Cub Scout Pack 4 and headed to Avent Park, just north of the tennis courts where there is plenty of open space.

“The area will benefit from shade here and the trees won’t get in the way of people in the main park area playing Frisbee or football,” Hunter said.

Jubera said the trees will also help storm water run-off for the park and the neighborhoods close by.

Jubera has been a Scout for five years and hopes to gain his Eagle Scout rank within the year. Now that his community service project is complete, he only has to earn his Family Life Badge. He said getting his Eagle Scout badge is very important to him.

“It will help me get into a good college and get a better job,” he said.

The Eagle Scout rank is the highest rank a Boy Scout of America can achieve.

Hunter said the Scouts learned valuable lessons Saturday that they will carry with them throughout their life.

“They’re not only helping their community, but they’re learning how to plant trees, and how easy it is and hopefully, will continue to do it,” he said.

The city’s Building and Grounds department will help with maintenance and watering the trees.

Troop leader Denis Goulet said he has three Scouts currently working toward their Eagle Scout. He said Jubera’s project is teaching him, and the other Scouts, more than just how to plant trees.

“The community service project helps (Jubera) demonstrate and develop leadership skills as well,” he said while raking dirt over a freshly planted tree.