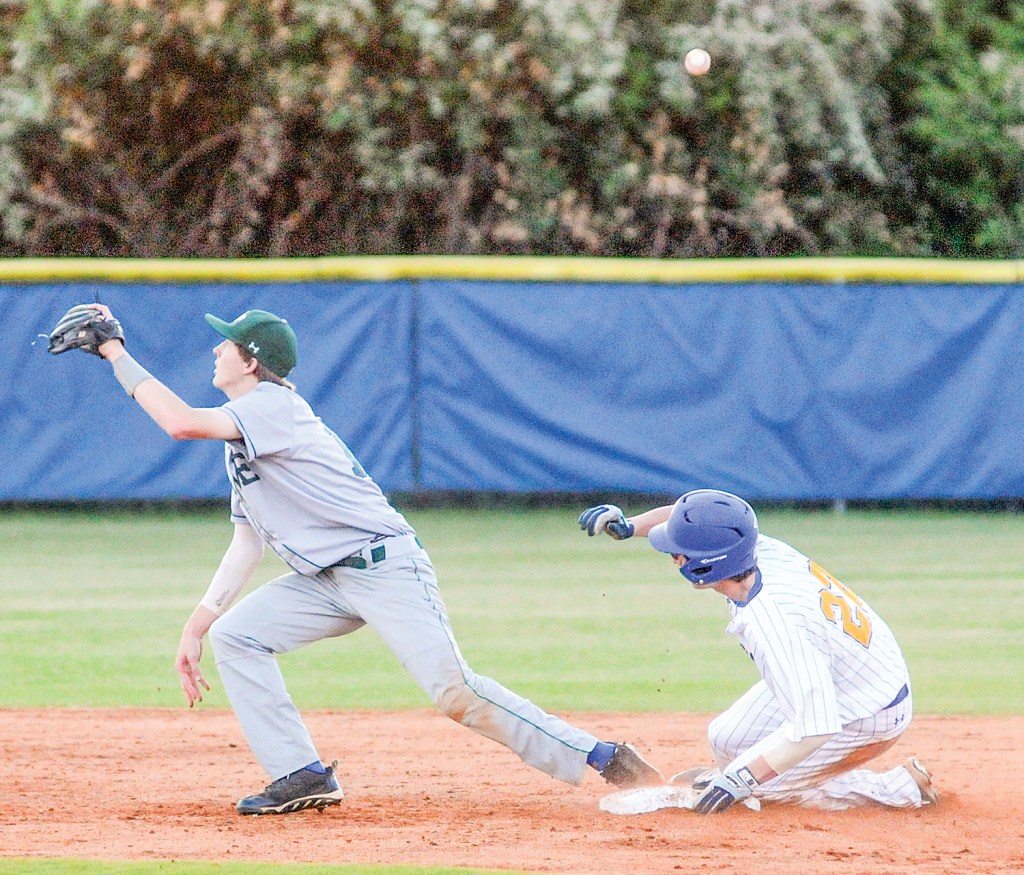 Oxford’s Preston Perkins (22) slides into second base as the ball gets past West Point’s Brandon Smith during Friday’s game at Edwin Moak Field. The Chargers won 17-1 to clinch at least a share of the Region 2-5A championship. (Davis Potter)

Oxford handled its business and then got a little help Friday to assure itself of a No. 1 seed in the postseason.

The Chargers finished a week-long sweep of West Point with a 17-1 rout at Edwin Moak Field in five innings. New Hope’s win over Saltillo later in the evening clinched at least a share of the Region 2-5A title and wrapped up the region’s top seed for the Chargers in the MHSAA Class 5A playoffs later this month.

But the course of action for Oxford (17-5, 6-0 Region 2-5A) won’t change in its final three region games as the Chargers try to hit their stride as they prepare to defend their state championship.

“Jason (Barber) has New Hope on Tuesday,” Oxford coach Chris Baughman said afterward. “Houston (Roth) has got Friday against Saltillo. Jason will throw (next) Monday or Tuesday against Briarcrest, and Reed (Markle) will throw that other (region game).”

Oxford scored two runs apiece in the first two innings before breaking things open with an 11-spot in the third for a 15-1 lead, taking advantage of one miscue after another by West Point in a game that wasn’t well defended by either side. Eight errors by the Green Wave contributed to nine unearned runs for Oxford while West Point’s run against Roth in the second was unearned as part of a five-error night for the Chargers.

“Nights like tonight are hard to keep your focus,” Baughman said. “It is. It’s not an excuse. We’ve got to do a better job with (our defense). But I’m glad it happened tonight and not on another night.”

But Oxford kept the pressure on offensively with 12 hits and six walks, doing most of its damage against Dylan Scott, who took the loss after allowing 12 runs (four earned) on nine hits in the first 2.2 innings. Duncan Graeber went 3-for-3 with a double and three RBIs while Roth helped himself with three hits, including a two-run single in the decisive third frame.

Roth tossed his sixth complete game in as many outings to improve to 6-0, recording double-digit strikeouts for the third straight start. The Ole Miss signee scattered five hits and fanned 12 while walking none.

Oxford will host New Hope for the final time in the regular season Tuesday. First pitch is set for 6 p.m.