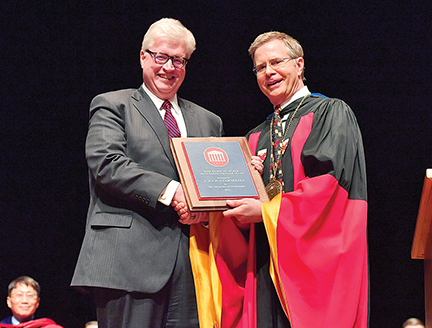 John Czarnetzky does more than teach the law; he infects his students with his enthusiasm for it.

The Mitchell, McNutt and Sams Lecturer at the University of Mississippi School of Law, Czarnetzky is known as a great communicator who earns praises for his ability to engage students in complicated subject matter and nuances of the law, UM Chancellor Jeff Vitter said Thursday evening (April 7).

For this, his passion and dedication to teaching, Czarnetzky has been awarded the 2016 Elsie M. Hood Outstanding Teaching Award, presented by Vitter during the 73rd annual Honors Day Convocation. Czarnetzky, who has taught undergraduate students as well as law students, was honored and humbled.

“I was in the car with my dear wife, and became emotional when the chancellor called and told me I was to receive the Elsie Hood award,” he said. “I am privileged to know a number of previous winners, from longtime colleagues at the law school through Bob Brown, last year’s winner. I was humbled deeply, and still have trouble believing, that with this award I am being grouped with those outstanding professors and colleagues.”

Colleagues affirmed that Czarnetzky is a perfect choice for the honor.

“John Czarnetzky is widely regarded as one of the law school’s best teachers,” said Debbie Bell, the school’s interim dean. “He is a spellbinding speaker and gifted teacher, with the added benefit of being one of the most entertaining lecturers I have ever heard. His students sing his praises. Being named as the Elsie M. Hood Award recipient is a well-deserved recognition.”

Czarnetzky joined the law faculty in 1994, after practicing bankruptcy and commercial law in Chicago and in Richmond, Virginia. He has been honored as outstanding professor four times by the law student body and serves as an adviser to several student organizations and to the Business Law Institute, an innovative collaboration between students and faculty that provides opportunities for students to develop skills in corporate, commercial, tax and business law.

The professor says this is the highest honor he could hope to receive.

“It always seemed out of reach for me,” he said. “Receiving it is the capstone of my 22 years here at the University of Mississippi, an institution I love. Going forward, my task will be to live up to this high honor.”

Students cited Czarnetzky’s enthusiasm and ability to stimulate a classroom amongst his traits that make him a great teacher.

“Few individuals have the ability to not just teach the law, but to animate the law,” one student wrote in a nomination letter. “His passion for the law and for the subject he is teaching is evident from the first moment of each class session, when he comes bounding into the classroom with a textbook – or nowadays, Kindle – tucked under his arm and a grin on his face.”

Another student called him “by far the most kind, considerate, engaging professor I have had throughout my undergraduate and law school tenure at Ole Miss.”

“The courses he teaches, including bankruptcy, civil procedure and secured transactions, are some of the most complicated ones at the law school, but that they are always in demand because he is such an engaging and effective teacher,” the student continued.

These students’ words are reflective of Czarnetzky’s teaching philosophy, which he says he’s developed over his tenure.

“My approach is to treat students as adults unless they are determined to prove me wrong, and to model civility and professionalism in the service of intellectual rigor,” he said. “I try to impart to students my enthusiasm for the subjects I teach and, perhaps more importantly, my dedication to them as persons.

“I also think a bit of humor in the classroom helps avoid the trap of taking ourselves too seriously all the time, whether in the classroom or in life. I am deeply gratified that students believe they benefit from my approach.”

Czarnetzky holds a bachelor’s degree in chemistry from M.I.T., where he was an offensive tackle on the football team. He served in the U.S. Army as a chemical officer and intelligence analyst before obtaining his law degree from the University of Virginia. He also served as executive editor of the Virginia Law Review and editor of the Virginia Journal of Environmental Law.

He was the first law professor invited to teach in the Sally McDonnell Barksdale Honors College and helped establish a partnership between the two schools.

“He inspired a love of debating and defending my ideas, and empowered me to continue challenging my and others’ ideas throughout my life,” wrote a student in his Honors 102 class.

“He’s always available, and always has a smile on his face,” said Jess Waltman, law school student body president who also took several courses from Czarnetzky as an undergraduate honors student. “He genuinely cares about our students and our school and wants it to be the best it can be.”

In addition, Czarnetzky serves as a legal adviser to the Holy See’s Mission to the United Nations. He has represented the Holy See in negotiations including the establishment of the International Criminal Court and several international treaties, including one on the rights of persons with disabilities.

His scholarly interests are bankruptcy, commercial and international law. Czarnetzky has published in the Notre Dame Law Review, Fordham Law Review and Arizona State Law Journal, and his scholarship also has explored the intersection of Catholic social theory and American corporate and commercial law.

Czarnetzky is married to Sylvia Robertshaw Czarnetzky, an Episcopal priest in the Delta town of Cleveland, where they reside.

Each year since 1966, the university has recognized excellence in teaching by presenting the Elsie M. Hood Outstanding Teacher Award. Based on nominations from both students and faculty, the award includes a personal plaque and a check from the chancellor. Recipients’ names are also engraved on a plaque listing previous winners, which is displayed in the university’s J.D. Williams Library.