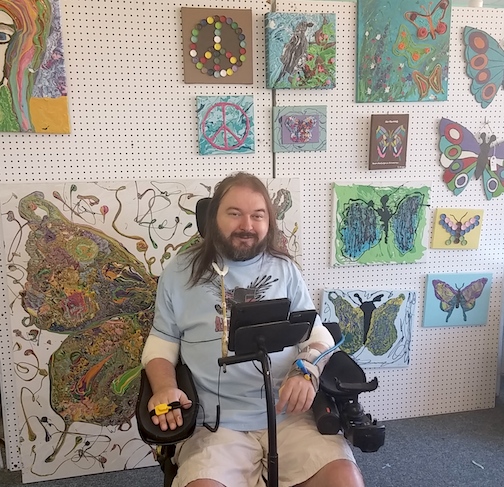 Seven years ago, Kevin Orr’s life changed forever after a devastating motorcycle wreck left him with fractured vertebrates in his neck, broken bones and a severed spinal cord.

At the time of the wreck, he worked at the Oxford Police Department as a patrol officer.

While no longer wearing a badge, he continues to serve by being an advocate for people with spinal injuries and disabilities.

And throughout his struggle and fight to recover, he discovered he’s an artist.

After being thrown from his motorcycle head first into a brick wall, Orr went through multiple surgeries to replace several vertebrae and repair his spine. He spent a month in the hospital on a ventilator. He was paralyzed from the chest down. He went to Shepard Center in Atlanta after weaning off the ventilator and started physical rehabilitation. There he worked on gaining as much strength as possible in his arms.

“My injury level left me paralyzed from the chest down but I could still use my biceps in my arms,” he said. “But I had no hand or wrist function.”

His mother quit her job after his wreck to stay with Orr and his brother dropped out of summer school classes to help as well. His former girlfriend visited him as often as possible in Atlanta.

“I had a very strong support group around me,” he said. “So that was one thing that really helped in my transition during this very traumatic experience.”

After his stay at Shepard, he went to live with his family in Tupelo, where he still lives. He eventually met a new friend, William Heard at LIFE, a nonprofit organization that stands for Living Independence For Everyone. About six years ago, he was asked to serve on the advisory board. The organization helps build ramps, provides handrails for people

with disabilities and helps refer people to other organizations for assistance.

“Also, most of the employees at the LIFE office have some type of disability,” Orr said. “So they are able to understand each client and their needs even better.”

Our Artworks is a nonprofit organization that was started by Heard that offers art classes for adults with disabilities of all kinds, whether mental or physical and works closely with the LIFE organization.

Orr started to hang around Our Artworks, located in Tupelo, to meet other people and socialize. Eventually, Heard told Orr he couldn’t just hang out without at least trying to paint.

Using a mouth stick, Orr decided to give it a try.

“My first painting I thought was terrible,” he said. “It brought me back to being a kid and painting a sun in the upper left-hand corner … but I felt I could do better.”

Heard was inspired by Jackson Pollock and his style of drip painting.

“I watched William paint by using small Styrofoam cups and dripping paint into the canvas.”

Orr decided he could do the same thing with a few inventive ideas.

Orr taped a cup to the end of his mouth stick and poked a hole in the cup to drip paint with his mouth. Sometimes he connects a spoon to his mouth stick to drip smaller amounts of paint.

“I also can simply put a paintbrush directly into my mouth and paint the canvas that way,” he said. “You just have to be creative with your thinking and come up with alternatives to make painting accessible no matter what your situation happens to be.”

Orr paints things he sees that interest him and sometimes paints abstract pieces with random colors.

“I just love to re-create images of things all around us in everyday life,” he said. “I think I’m that way because I appreciate the beauty of everything that surrounds us. I get that from being stuck in a hospital bed for a long time without being able to see outside.”

Orr credits his training as a police officer for helping him prepare for this transition in his life.

“Being a police officer you have to be prepared for the worst situations every day that you go to work,” he said. “Also, I truly believe that we have an inherent will to survive. I met a man who was also paralyzed at the Shepherd Center that told me that I could focus on everything I couldn’t do and be miserable, or I could choose to focus on the things I could do and make the best of my situation.

“I thought that was great advice.”

On March 31, Orr was honored for his “courageous spirit,” at the annual Sigma Nu Charity Bowl that was started in 1990 to honor Chucky Mullins, an Ole Miss football player who was paralyzed the year before.

“It was an honor to represent and be mentioned alongside Chucky Mullins as an inspiring figure to others with disabilities,” Orr said.

In 2009, he was named Officer of the Year by the Lafayette County Law Enforcement Officer Association at their annual banquet. Orr still attends the banquet each year.

Orr is hoping to join the Mouth and Foot Painter’s Association, an international organization that provides scholarships for painters who use their mouth and feet. He recently started a YouTube channel where he shows people available assistive technologies that help with everyday life.

He also may hear wedding bells in the near future.

“I’m dating an incredible girl named Kimmy right now, so marriage could be a possibility in the future,” he said. “We are not rushing into anything but it’s nice to be with someone that accepts me for exactly who I am. She sees me for the man I am and not the wheelchair that I have to use to get around.”

He is also dabbling in photography and hopes to become a professional photographer.

“I have plenty of dreams to fulfill,” he said. “The future is only getting brighter for me.”