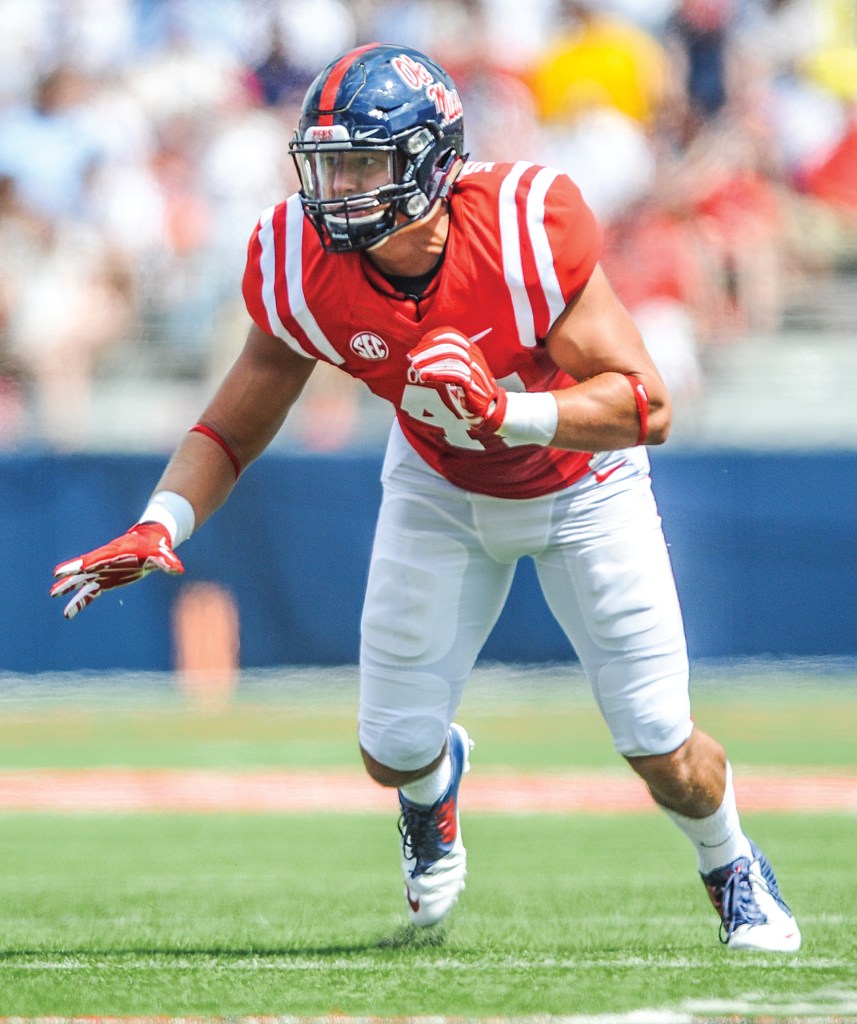 Ole Miss handed out its annual spring awards Saturday with John Youngblood receiving perhaps the most prestigious of them all.

Youngblood, a fifth-year defensive end, was named the recipient of this year’s Chucky Mullins Courage Award during a breakfast ceremony at the Manning Center before the Rebels began their final practice of the spring. The award is in its 27th year in memory of Mullins, the former Ole Miss safety who died from complications of the infamous hit he put on Vanderbilt’s Brad Gaines during a game on Oct. 28, 1989 that left him paralyzed.

Youngblood will wear Mullins’ No. 38 this fall.

“There were several good candidates for it, and that makes it hard,” Ole Miss coach Hugh Freeze said. “That’s also a good thing for our program that we have several that we think would be good candidates, but it’s hard to argue that John was not very, very deserving of it. He’ll represent everything that Chucky was and stood for in a great manner as he represents this university and our football team. Really happy for him and his family.”

A native of Trussville, Alabama, Youngblood wasn’t highly recruited out of high school as a late offer from Ole Miss was his only one from a Power Five school. The 6-foot-3, 255-pound Youngblood got most of his playing time on special teams his first couple of years but has seen his role increase on defense to where he’ll be the third defensive end heading into fall camp.

Youngblood played in all 13 games last season with two starts, finishing the year with 19 tackles.

Following Saturday’s practice, Freeze gave a synopsis of the spring, saying the Rebels made more progress on picking up their tempo on offense than they did with their situational defense.

Ole Miss created plenty of turnovers, but “we’ve got to continue to fight to improve on third down,” Freeze said. “I think our red-zone defense has got to have some more work, too. We’ve got to look and study that. The last two scrimmages, it seemed like we gave up too many touchdowns in the tight red zone in particular.”

As for players who stood out consistently, Freeze mentioned quarterback Shea Patterson, safety Myles Hartsfield and defensive linemen Marquis Haynes and Breeland Speaks in addition to Jefferson and Jones. But Freeze reiterated it’s too early to know if Patterson, a five-star signee, will play this fall.

Everything ‘good’ with Conner

Freeze said everything is on track for safety Tony Conner to be back on the field for fall camp.

Conner didn’t participate this spring while rehabbing the second surgery he had on his torn meniscus late last season. He missed seven games after suffering the injury.