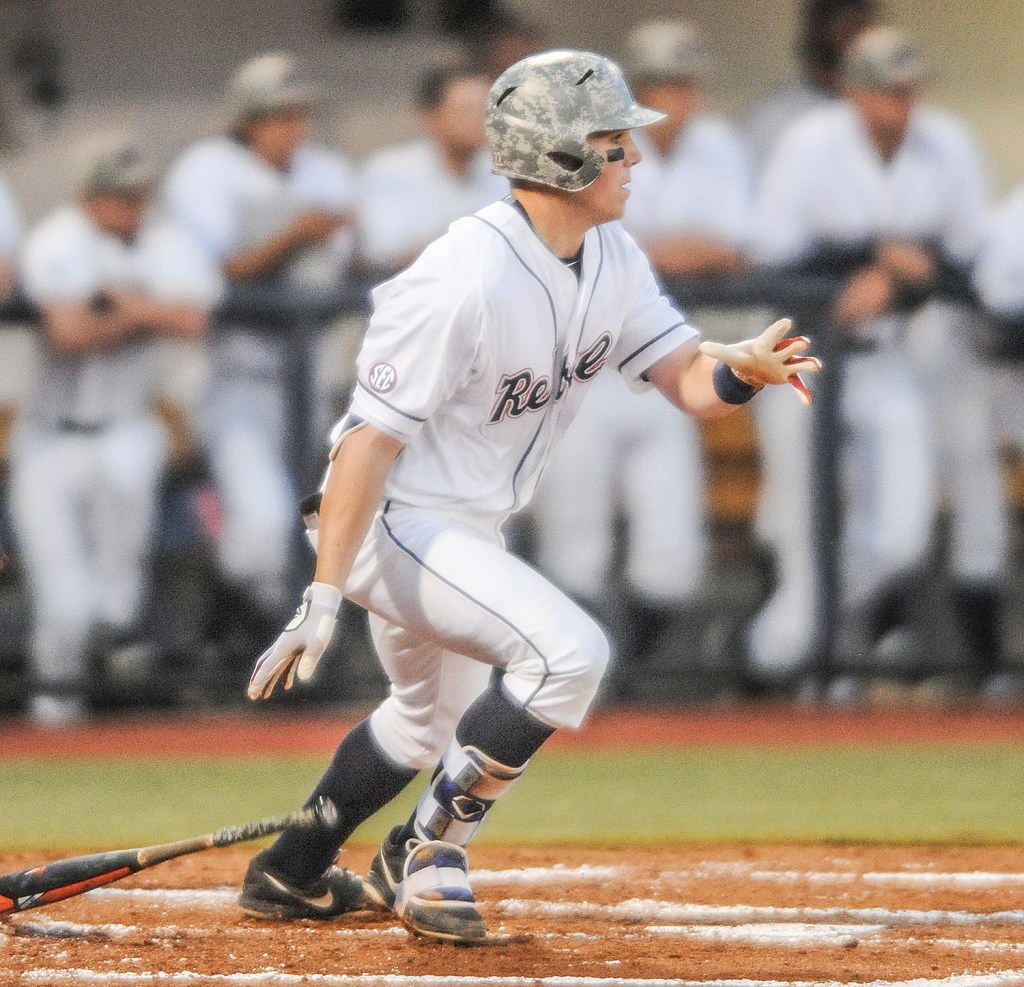 Ole Miss’ Henri Lartigue (22) hits a two-RBI single against Arkansas at Oxford-University Stadium on Saturday. The Rebels clinched the series with a 14-9 win. (Bruce Newman)

In a game that saw a cat run onto the field and a 10-run eighth inning, Ole Miss kept its winning ways going with a 14-9 win over Arkansas on Saturday at Oxford-University Stadium. The victory helped the No. 14 Rebels (24-7, 5-6 Southeastern Conference) earn their first SEC series victory since taking two of three from Tennessee nearly a month ago as they took the Friday opener 7-3.

Head coach Mike Bianco said on Monday he was going to make some changes in the weekend rotation and Saturday night was the first glimpse of that as sophomore David Parkinson got his first career start and earned his first career win.

The left-hander went 5.1 innings, giving up three hits and only one run while striking out three and walking two Arkansas batters.

Much like Friday, the offense got off to a quick start, scoring two runs in the first two innings for an early 4-0 lead.  They added two more runs in the sixth and seventh innings.

Arkansas (20-11, 4-7) got on the board for the first time in the game during the fourth off a solo home run by left fielder Luke Bonfield. The Razorbacks added four more runs in the eighth inning off Brady Feigl.

The final two innings saw a combined 13 runs scored with 10 of them happening in the eighth inning. Arkansas scored four runs to make it an 8-5 game, but the Rebels responded with six runs of their own in the home half of the inning. Nineteen total batters went to the plate.

Arkansas designated hitter Grant Koch was 2-for-4 with two RBIs along with second baseman Rick Nomura, who had two RBIs and was 1-for-3 at the plate.

The bullpen was shaky for the second night with the Rebels giving up eight of Arkansas’ nine runs in the eighth and ninth innings. Will Stokes and Dallas Woolfolk worked in relief to close things out.

Brady Bramlett had his best outing of the season and the offense continued to stay hot as the Rebels took the opening game of the weekend series.

The junior worked seven innings, his longest outing of the year, and tied a career-high with 12 strikeouts while not allowing a run.

Ole Miss scored seven runs on 11 hits with all the damage coming in the first four innings. The Rebels scored three runs in the second and third innings and added the final one in the fourth.

Lartigue went 3-for-4 and Bortles went 2-for-4 with each recording an RBI. Tate Blackman was 1-for-3 with two RBIs.