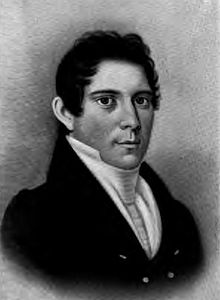 When I conduct a tour of the Lamar Home on North 14th Street, one of the first things people ask is where did the unusual name came from?

Was it a family name passed on, or a friend of the family that was to be honored, or was it someone who had contributed to the United States’ formation.

Well, to answer the question, it was Justice Lamar’s great uncle who came up with the name, Lucius Quintus Cincinnatus.

First, I would like to give you a little background on the Lamar family and their journey from France to England and then to the British Colonies of North America in 1685.  This information comes from a biography written about Justice Lamar after his death in 1893 by former University of Mississippi Chancellor, Edward Mayes, who was a son-in-law of the late Supreme Court Justice.  This book was written in 1896 and is entitled “Lucius Q.C. Lamar:  His Life, Times, and Speeches 1825-1893.”

The ancestors of the justice were Huguenots from the Flanders area of France. After the repeal of the Edict of Nates, which had given the Protestant Huguenots some religious liberty, the Lamore family moved to the British North American colonies. They had gone to England in 1663 and would remain there until the 1680s.  Peter Thomas Lamore moved his family first to Virginia and then to Maryland.  The family had various spellings of their name listed on land records.  Some of them were Lamare, Lamaire, de la Maire, Leamire, Lemarre, Lemat, and La Marr.

Lord Baltimore had issued an order that the citizens of Germany, France, and other continental countries could hold land and pass it on to their descendants. This made the Maryland Colony an ideal home for Lamore. Peter Thomas Lamore’s grandchildren would fight in the Revolutionary War and distinguish themselves in various battles.  General Maximilian Lamar would be killed at the Battle of Saratoga and Major Marcen Lamar would be killed at Parle Tavern. Colonel William L. Lamar would fight in both the Revolutionary War and the War of 1812.

John Lamar, who was born in 1769 and married his cousin Rebecca Lamar, would move his family to the state of Georgia.  He had a plantation in Putnam County, which was about 8 to 10 miles south of Eatonton, in about 1810. His grandson, later a Supreme Court Justice, would be born there and would have the same name as his father.

John had a bachelor brother, Zachariah, who lived with his brother’s family on their plantation.  Chancellor Mayes states in his biography that the bachelor Uncle Zachariah was a self-taught man, “who like many of the men in the old plantation times, gave himself up to the ideal world of literature and history, without any further purpose than the enjoyments of that fairyland.”

“These honest happy — some might consider them useless — members of society belong to an extinct fauna, but they loved and revered and humored in their day in little circles. This Lamar was one of this sort, perhaps its most striking example.

“Over all his immediate surroundings was cast the glamour of that realm of letters in which he lived.  When he led in family prayer, good Methodists that they were, he did not think it inapt to thank God for the heroic examples of Roman or English or American history, for the march of science, or for exemption from crimes and miseries of less favored lands into which his geographical studies had last led him.

“So when son after son was born to the head of the house, this bookish enthusiast claimed the privilege of naming his infant nephews after his favorite of the moment, and the amiable and doubtless amused parents consented.  Thus Lucius Quintus Cincinnatus, Mirabeau Buonparte, Jefferson Jackson, Thomas Randolph, and Lavoisier Legrand (a grandchild) indicate how his interest shifted from history to politics, and from politics to chemistry.”

Justice Lamar’s grandfather, John, would be buried in a quiet garden on the family plantation upon his death in 1833.  His son Mirabeau Buonaparte Lamar, who was the second President of the Republic Texas after Sam Houston, would pen the inscription on the slab over his grave (similar to the slab that is over Justice Lamar’s grave at St. Peter’s Cemetery here in Oxford).  It reads, “In memory of John Lamar, who died Aug. 3, 1833, aged 64 years. He was a man of unblemished honor, of pure and exalted benevolence, whose conduct through life was uniformly regulated by the strictest principles of probity, truth, and justice; thus leaving behind him, as the best legacy to his children, a noble example of consistent virtue. In his domestic relations he was greatly blessed, receiving from every member of a large family unremitting demonstrations of respect, love, and obedience.”

With family members that had set such an example for Justice Lamar, who was eight at the time of grandfather John’s death, how could he not have left his mark on our country.