Botanicals, supplements and more up for discussion at UM 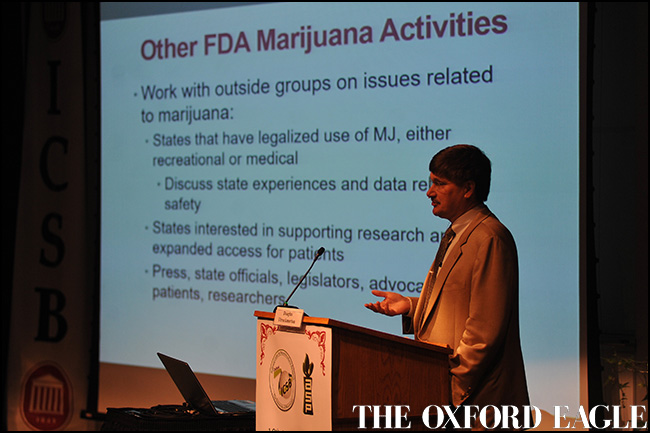 Douglas Throckmorton speaks during the 16th Annual Oxford International Conference on the Science of Botanicals, at the Oxford Conference Center in Oxford, Miss. on Tuesday, April 12, 2016. The annual event examines medicinal plants and dietary supplements, and also brings together research, regulatory and industry representatives to focus on quality and safety of dietary supplements.

Regulations for dietary supplements and cosmetics are on the discussion board this week during an annual botanicals conference.

The University of Mississippi’s Natural Products Center began hosting the 16th annual Oxford International Conference on the Science of Botanicals on Monday and it runs through Thursday. It’s known as a premier event for examining medicinal plants.

Larry Walker, director of the National Center for Natural Products Research, said 350 researchers from universities, government and industries representing 24 countries are in town to learn and study the safety of the dietary products.

“Also represented are regulatory bodies from around the world, trade associations, traditional medicine systems,” Walker said. “Many are regular attendees for the ICSB, but (there are) a number of first-timers as well.”

This year’s event is also in conjunction with the Interim Meeting of the American Society of Pharmacognosy, the leading scientific society for the study of drugs derived from natural products, organizers told the University of Mississippi.

“For the botanical supplement world, there is no other meeting quite like this,” Walker said. “Regulatory agencies, trade associations, quality assurance, and analytical and safety people, as well as physicians, toxicologists and media representatives will be offering their perspectives on botanicals 22 years after the Dietary Supplement Health and Education Act of 1994.”

That theme was discussed during the conference’s opening session, when a keynote speech was given by Steven Musser, deputy director for scientific operations of the Center for Food Safety and Applied Nutrition. Musser daily promotes and protects public health by making sure the U.S. food supply and personal cosmetics are safe, properly labeled and more.

Walker said there was plenty of enthusiasm for the first day, including Musser’s speech, and it was a busy start of the conference with ample opportunity for networking.

“This is the largest and best conference of this type — dealing with so many aspects of botanicals — how they are used around the world, their benefits and drawbacks, and how the U.S. and other countries deal with the problems of adulteration, and ensuring the quality, purity and safety,” he said.

With that networking also will come discoveries, breakthroughs and possibly the next best thing for botanicals.

“Our own researchers here at the National Center for Natural Products Research will report many of their new findings about the chemistry and effects — good and bad — of medicinal plants, and how to measure them,” Walker said. “It is difficult to predict what it other groups may report, but every year we see exciting new science reported. We will point out a few highlights later in the week.”

Also, the conference doesn’t just fill up hotel rooms. It gives many of the international visitors a good taste of America, via Oxford.

“We bring to the LOU community on a repeat basis many U.S. and international visitors, who learn about our unique scientific program, the beauty and charm of Oxford and Ole Miss,” Walker said. “For many people involved in traditional medicines, botanical research and regulation around the world, when they think of the U.S., they think of Oxford, Mississippi.”