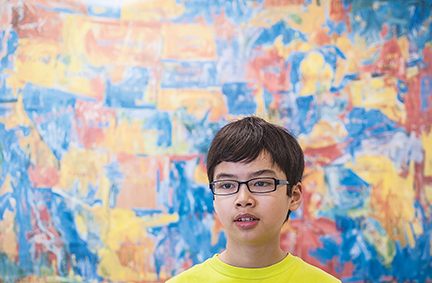 An Oxford Middle School student stands above the rest.

The competition was held at Hinds County Community College in Pearl recently and featured fourth- through eighth-graders statewide.

Edmund qualified for the state bee by winning the school-wide bee, something he did by correctly answering “Vancouver” when asked what was the largest city in British Colombia. The championship round of the state bee was determined in a best of three questions format. Edmund took a 2-0 lead when he correctly identified Stockholm as the Scandinavian capital city based at the mouth of Lake Malaren.

“I was already ahead at that point so when I answered that, I knew I was going to win,” he said. “After that, I pulled ahead 2-0 so I secured winning and I was pretty excited.”

For earning the award as state champion, the 13-year-old took home $100, a book about national parks and a backpack full of geography-related items. He also earns an entry into the 2016 National Geographic Bee to be held in Washington at the end of May. The winner of the national bee will be awarded a $50,000 scholarship, a lifetime subscription to National Geographic, a trip to the Galapagos Islands and $500 in cash.

Edmund wasn’t the only one who was excited when he clinched the state championship. Oxford Middle School geography club sponsor Pat Kincade was unable to attend the event in Pearl, but was elated when she received the news.

“Oh my gosh, I was thrilled,” she said. “Edmund’s dad (Ole Miss associate professor of medicinal chemistry Dr. Robert Doerksen) emailed me that morning after the results and I was just ecstatic.”

In order to prepare for the state bee, Edmund used the Internet to pick up and solidify his knowledge of the content, as well as atlases to gain a better mental image of the world’s layout. The bees cover everything from capitals, cities and countries to cultural and economic geography, topography and landmarks. Kincade has helped Edmund and other club members each Friday in the geography club through quizzes and The Amazing Race game.

The Amazing Race splits the students up into teams that must answer questions and travel across the world on a map. Each stop on their sheets features treasures the students must pick up for their “museum back in San Diego.” The team that reaches San Diego with all the treasures first will receive a free lunch courtesy of Kincade.

In addition to developing knowledge and context of the world, Kincade hopes to foster a passion for traveling, and seeing the world which the students are studying. One way she did that was by having former world-class and former Ole Miss star pole vaulter Sam Kendricks speak to the class.

“A former student of mine, Sam Kendricks, will be going to the Olympics in Rio (de Janeiro, Brazil) and he came and spoke to my students about his travels with track and field,” she said. “The students got more interested in geography because he told them about the marketplaces, not just the tourist places. He would tell them about the cultures and everyday life of places he competed.”

Edmund has a passion for not just geography, but for travel as well. In the future, he hopes to use that knowledge in a career in politics, such as working for the state department. For now, he said he applies his use of geography in his social studies courses and as context when reading world news.

“If you have good knowledge, you can better apply that to what’s happening in these situations,” he said. “The conflict in the South China Sea between China and six other countries for control of islands in the sea. It’s just interesting how they’re all fighting for this area. It’s interesting to read about.”

The local wunderkind said he will continue to prepare for the national bee the same way he prepared for the school and state bees. His teacher bought him some National Geographic books and created quizzes to help him out, but her confidence in her student is sky-high.