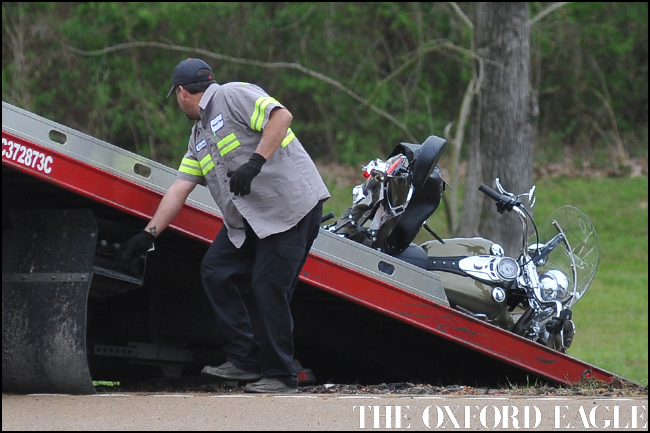 A motorcycle is removed from the side of the road following a wreck involving a motorcycle and a car, in front of Servpro in the eastbound lanes on Highway 6 near Oxford, Miss. on Wednesday, April 13, 2016. The motorcycle rider, Eric Williams of Como, was killed in the wreck, which is under investigation by the Mississippi Highway Patrol.

A Como man was killed in a Wednesday morning crash on Highway 6 near the Lafayette – Panola county line.

According to the Mississippi Highway Patrol, Earl Vance of Vance and Eric Williams of Como were both traveling east on Highway 6. Around 8 a.m., Vance’s vehicle collided with Williams’ motorcycle near Servpro.

Williams was killed during the collision.

The collision shut down the highway until shortly after 9 a.m.

MHP said the crash is still under investigation.

FINDING A GROOVE: Rebels back in SEC West race…