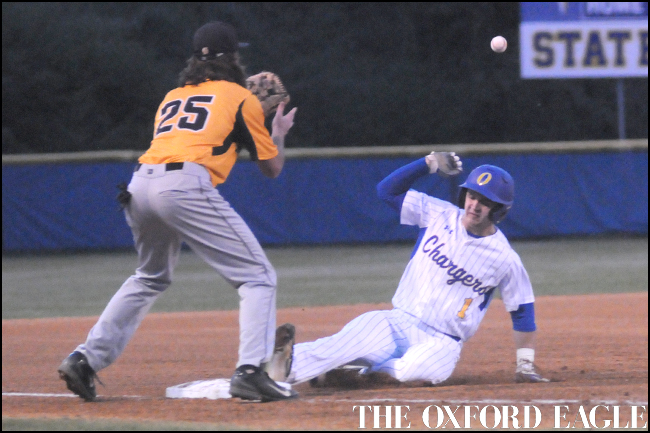 Oxford had just four hits Tuesday, but Jason Barber made sure it was enough.

Barber saved some of his biggest pitches for last in another strong outing to help the Chargers finish a season sweep of rival New Hope in a 2-1 win at Edwin Moak Field. Oxford notched its eighth win in the last nine meetings between the teams and clinched the outright Region 2-5A championship in the process.

“Beating them is always good,” Barber said. “My freshman and sophomore year, we struggled to get a win every now and then from them. Now being on top, it’s a lot of fun.”

Barber, a senior right-hander, capped the complete-game win by thwarting New Hope’s final threat. The Trojans (14-7, 3-4 Region 2-5A) had the tying run on third with one out in the top of the seventh following a leadoff single, an error and a sacrifice bunt, but Barber got Carson Forrester looking before inducing a game-ending groundout from Tyler Jones with the bases loaded.

“It’s just one of those things as a pitcher, you’ve got to be able to bear down and own the situation,” Barber said. “I kind of just focus in. There’s no outside distractions that really get to me. I just try to keep it between me and the catcher and just really focus as hard as I possibly can to spot up a pitch and make good pitches. So far, it’s done me pretty well.” 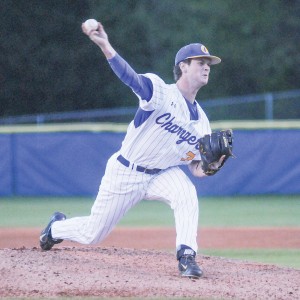 Oxford’s Jason Barber pitches against New Hope on Tuesday. The senior right-hander went the distance while striking out a season-high 13. (Davis Potter)

Oxford (18-5, 7-0) had just one hit against New Hope’s Trey Klostermann heading to the fourth. Ten of the Chargers’ outs were fly balls or pop-ups, an increasingly disturbing trend for Oxford, while all four of Klostermann’s strikeouts came within the first three frames.

“I was very disappointed in our approach at the plate tonight,” Oxford coach Chris Baughman said. “We try to fix it in practice, we work in practice on it, we preach it, and we preach it during the ballgame. I just hope it doesn’t catch up and bite us in the butt one day when it matters.”

But the Chargers broke through in the home half of the fourth with a little help from the Trojans.

A walk and a single by Barber put runners at the corners for Oxford, which erased its 1-0 deficit when first baseman Bryce Braddock tried to nab Thomas Dillard at third following a pickoff attempt. Braddock’s throw sailed wide of third baseman Parker Lane, allowing Dillard to trot home.

Klostermann fielded Preston Perkins’ dribbler two batters later, but his throw to first pulled Braddock off the bag. Pinch-runner Giles Lamar took off for the plate and just beat the tag of catcher Thomas Stevens to put the Chargers ahead.

New Hope got some assistance from Oxford in the top of the third when third baseman Carson Stinnett couldn’t handle Lane’s grounder, allowing Will Godfrey to break the scoreless tie, but Barber retired 10 straight before working his way out of trouble in the seventh. The Ole Miss signee scattered five hits and struck out a season-high 13 to improve to 6-1 on the season.

“Thank goodness for Jason Barber tonight,” Baughman said. “Some people may not like me saying that, but you know what, without him tonight, we don’t win the ballgame.”

Oxford will take its seven-game winning streak on the road Friday for another region game against Saltillo at 7 p.m.