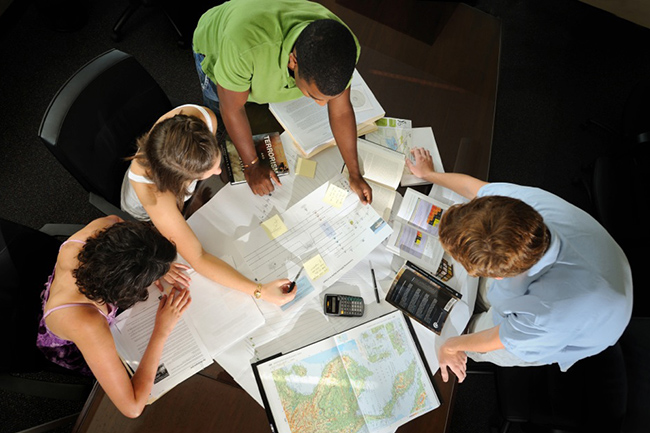 university of mississippi Center for Intelligence and Security Studies students huddle together as they work on their assignments at the University of Mississippi.

Those who have driven on the Oxford Square in recent weeks have noticed an influx of Homeland Security vehicles parked along East Jackson Avenue for the Aryan Brotherhood trial.

While it may seem like the town has been flooded with government officials, the University of Mississippi is doing its best to flood a wave of students right back through the Center for Intelligence and Security Studies.

CISS began in 2008 after receiving an appropriation from Congress to start a program at the University of Mississippi that would create intelligence analysts. Many in the government were looking for answers on why 9/11 happened and one of the major flaws identified was there wasn’t good analysis going on between intelligence agencies, according to CISS interim director Melissa Graves.

“The early years (of the program) we were very emphatic about letting people know we are producing analysts and not spies,” she said. “The analyst’s job is to look at information coming in, make assessments, figure out what it means and brief policy makers.”

In order to be admitted into the program, students must apply during the spring application period, have a 3.0 grade point average and have taken the Introduction to Intelligence Studies course. After admittance, students take Advanced Analytics I, Advanced Analytics II and National Security Issues of the 21st Century. To complete the program, students must complete a senior capstone project and intern with an agency in Washington, D.C., or locally doing crime analysis for a police or cold case unit.

Derek McOmber, 30, is a management information systems major from Port Orchard, Washington, who is currently in the eighth cohort in the program. McOmber heard about the program through a marketing professor and said he was “intrigued.”

“My ambitions are to manage a business through analytical problem-solving to make more efficient processes to build the company’s vision,” he said. “I have learned to disseminate information into parts that can be used to allow employees that I manage to understand and allow for better analysis of the work that’s done to maintain quality assurance with the product.”

Graves called the program’s success “very enriching” as she has placed students in “every intelligence agency you can think of.” She said the CISS students are very diverse with slightly more women than men. The majors and minors of the students vary but many come from international studies. While the students are very different on paper, Graves said they all share similar qualities.

Graves was in attendance at the Aryan Brotherhood trial on Monday, finding the connections between the group to drug trafficking and prison radicalization to be interesting. She’s spoken to her students about the group and their very real place in the world.

“The Aryan Brotherhood has for a very long time been an interest of the FBI and other domestic agencies,” she said. “We’ve had students focus in on their past and other white supremacy groups. They’re still a threat and still around.”