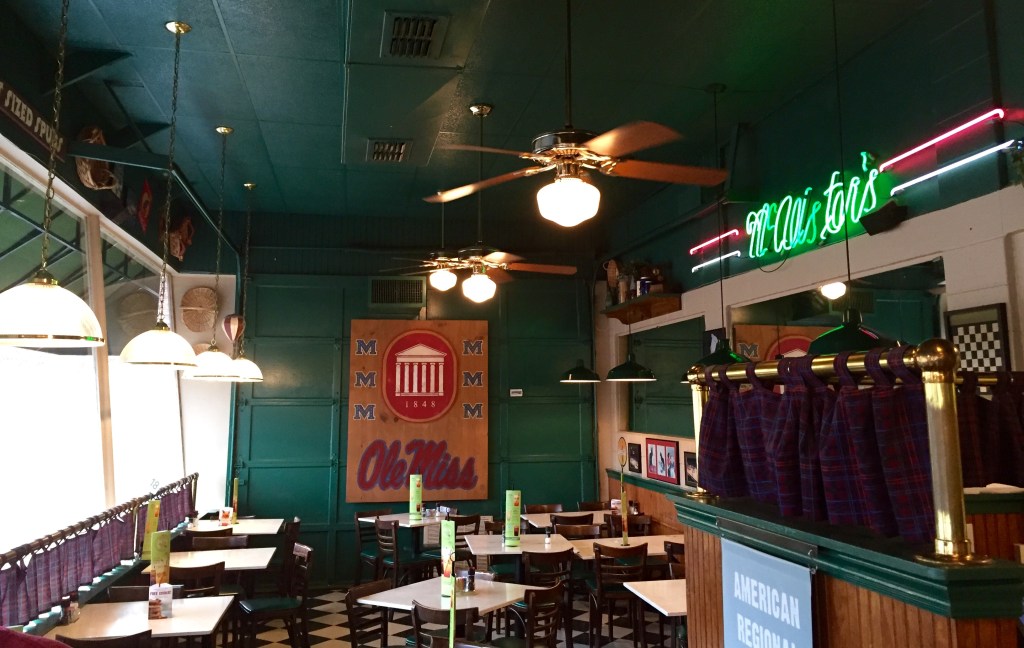 McAlister’s Deli on University Avenue is the original restaurant for the food chain and was founded in 1989.

From the large green letters above the striped awning to the checkered tile inside, McAlister’s Deli reaps tradition and a past that may be unknown to many.

Oxford is full of hidden gems, and located past the Square on University Avenue is the original McAlister’s restaurant of the near 350 in existence today.

Originally a gas station, McAlister’s was not founded until 1989. Retired dentist Dr. Don Newcomb purchased the property after it had been converted into a ’50s diner to film the movie “Heart of Dixie.”

The store still has a lot of originality. The far side walls are garage doors, and the whole front of the restaurant is lined with large windows. The walls are decorated with memorabilia and images of the original store, historic Ole Miss photos, as well as informative pictures about McAlister’s Famous Sweet Tea and other Southern props reflecting their menu.

Newcomb originally named the restaurant Chequers, but found it to be too similar to the fast-food chain restaurant Checkers. He renamed the store McAlister’s, a name honoring his wife’s parents.

Along with its interesting origin, McAlister’s menu attracts customers of all ages. “McAlister’s is unique because of our menu options that are not fried, and (it) has a lot of diversity, our sweet tea, and our genuine hospitality,” said General Manager Austin Mitchell.

Their Famous Sweet Tea is made fresh daily and poured out at the end of every shift.  Every year, McAlister’s has Free Tea Day. Customers can come in for a free tea without even purchasing a menu item.

One woman enjoys her sweet tea so much, she stops for it daily.

“She comes in the mornings before we are open to get a cup,” Mitchell said. “We usually aren’t ready, but she waits patiently, and then stops back by again to get it refilled.”

Part-time employee Forrest Crumby said that, aside from the sweet tea, McAlister’s is well known for their Texas size spuds. “Everyone talks about the spuds and how big they are,” said Crumby. “In reality, they are only two small potatoes put together.” The spuds are made fresh daily and are thrown out every 30 minutes if they are not used.

Aside from their regular menu, including soups, spuds, salads and sandwiches, McAlister’s has somewhat of a secret menu. “Any time something is taken off the menu that isn’t a premium item, like shrimp or something, we can most likely make it,” said Crumby. “A customer can still order something that is no longer on the menu.”

“We’re busy year round,” said Crumby. “Sunday mornings are probably busiest though due to church and tourists grabbing a quick, causal bite before leaving town from the weekend games.”