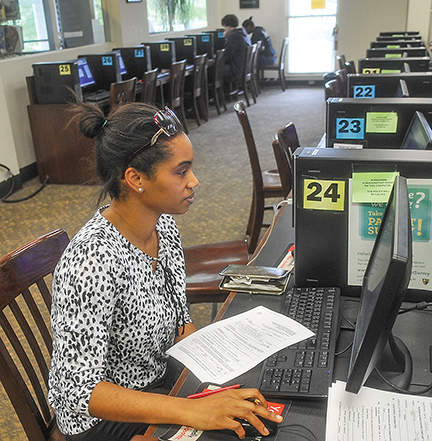 Bruce Newman Marquita Carr uses a computer at the Lafayette County and Oxford Public Library on Thursday. Many residents without Internet service frequent the library.

It is well-documented that Lafayette County is the fastest-growing county in Mississippi and one of the fastest growing in the nation. But along with that distinction comes growing pains with infrastructure and technology.

Some areas of the county have not been able to keep up with that pace, and as a result, lag when it comes to obtaining certain technologies incorporated areas take for granted.

According to local physician Dr. Greg Patton, there are communities within the county who only have access to the Internet via their cellphones by using the “hot spot” option.

“This is an expensive and ineffective manner to give citizens access to a very important public service,” Dr. Martha Heffner said.

Teaming up in Haiti

Patton and Heffner began discussing the lack of reliable Internet service in rural Lafayette County while on a mission trip in February to Haiti. As a former community college administrator for 30 years, Heffner was in contact with programs that involved community and economic development, including the attempt to close the “digital divide” in Mississippi.

“I have Internet at my house, which is also in the county, so I was shocked that people in the 38655 area code did not have good Internet service,” Heffner said.

Heffner, who retired to Lafayette County about a decade ago, began putting people together who might be able to help solve the problem.

One such person is Dr. Roberto Gallardo, a faculty member of the Center for Technology Outreach at Mississippi State University. Gallardo will facilitate a meeting Monday at 5:30 p.m. in the Lafayette County and Oxford Public Library to discuss the lack of Internet service for rural residents in the county.

According to Patton, many students in those areas with a lack of Internet service either use the public library or free WiFi at local coffee shops in order to complete class assignments.

“Maybe five years ago this wasn’t that big of an issue,” Patton said. “Our hope is that with increased community awareness, the digital communication industry will heed our requests for better Internet access in rural areas.”

Patton, who has lived in the Yocona community for 16 years, said the only way his two teenage children are able to access the Internet at home is via cellphone towers “and that’s not always very reliable.”

“It’s also expensive,” Patton said. He added that streaming video is cost prohibitive and other providers have a limited amount of data relative to the needs of his high school children to complete their classroom assignments.

Both of his children attend Oxford High School, which utilizes digital platforms in the classroom.

Lafayette County School Superintendent Adam Pugh admits that many students in his district do not have home access to the Internet, which causes a significant problem. He said students in Lafayette Springs and Harmontown are two areas that have the most unreliable Internet access.

“Obviously the closer you live to the main part of Oxford or a highway where fiber optic cable is run you have better access, but once you get back into some of our county roads Internet access is not as reliable,” Pugh said.

Pugh said teachers and students have to make adjustments when making schoolwork assignments.

“If it requires them to do research on the Internet, we try to get them to do it at school,” Pugh said. “Some of our kids ride buses and don’t have a chance to go to a public library, so we try to be very diligent in not assigning something that is next to impossible for them to do.”

The local public library currently has more than 30 computers for public use and according to officials, many of them are occupied constantly by those who do not have home Internet access.

Head librarian Laura Beth Walker said there is not a backlog of people trying to use the computers.

“We’re lucky that we have 32 public computers for the community to use,” Walker said. “We do see a lot of people come in to use our computers who do not have Internet access or WiFi at home, especially during tax time.”

According to Heffner, since 2004, more than $3.5 million has been granted to communities in Mississippi for providing wireless Internet service to rural residents. In 2013, the United States Department of Agriculture provided $20.3 million in grants for projects to bring broadband service to underserved rural communities.

Heffner points out that according to the website BroadbandNow.com, Oxford has 100 percent service with 14 providers of Internet service, which she says is misleading.

“Because of reports like this, many citizens of Lafayette County have been forgotten when it comes to adequate Internet service,” Heffner said. “The infrastructure may be in place but many people live at the end of the digital road.”

Heffner added that without Internet service, the economic, educational and social well-being of the community is being negatively impacted.

“Ultimately, I want everyone in Mississippi, particularly Lafayette County, to have access to efficient broadband technology at an affordable rate,” Heffner said.

Patton is hoping Monday’s meeting will raise awareness and get the attention of Internet service providers.

“Right now we have not been getting a response,” Patton said.