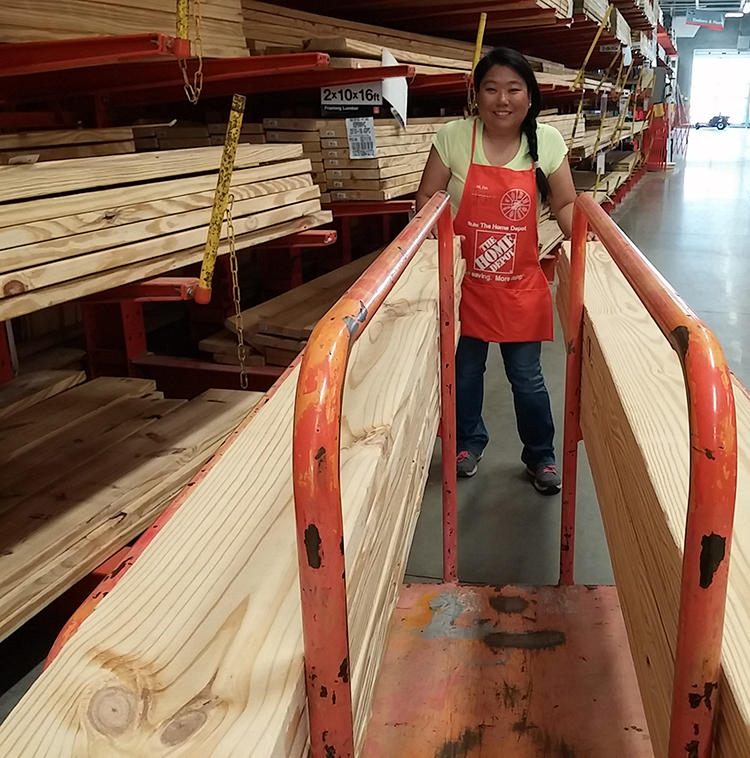 Iris Surrette has been involved with a variety of nonprofits and projects in the area, thanks to her job with Home Depot.

The 33-year-old Water Valley resident is a full-time pro-sales supervisor with Home Depot and is over contractor sales and builders, which she calls “interesting,” but it’s her efforts coordinating volunteers and funneling donations for local nonprofits that make the job super rewarding.

“We do have a lot of people approach us when they need help, wondering if maybe we can donate supplies or donate people to help them,” she said. “We do have a certain amount that we are allowed money-wise every quarter, and as far as manpower, it just depends on how busy we are. So, we take it on a case-by-case basis on how much we can actually do for them.”

In her 10 years with the company, she has worked on a lot of projects, but a few stick out for her. One was a partnership with the Yoknapatawpha Arts Council.

“Wayne Andrews approached us a couple of years ago about building mobile museums for an exhibit they had going on,” she said. “It was a huge box on wheels and the artist could decorate the inside of them however they wanted to and people could walk in them. It’s like a show within itself.”

Another project where they were able to be creative was when Lance Reed with Chick-fil-A approached them about Princess Balls and building a bridge in front of the restaurant that was a replica of one in France.

Surrette wound up with the title “Team Depot Captain,” which was a nod to her excitement for volunteering at the store. While she doesn’t have that title anymore, she still takes an active role in projects.

“Just because I love volunteering, getting out and helping, and helping where needed,” she said. “I still try to help where I can and they usually send people to me because I’m a little familiar with everything and how the process works.”

What’s Surrette’s favorite part about it all?

“Just meeting the different people and learning about their life and just helping them and knowing you made some small difference and you were able to help them with something you know they couldn’t do by themself,” she said.

She did just that at Christmas for one local family that needed help.

“This past Christmas I had seen something on Facebook about a family that was needing a Christmas tree,” she said. “The father had gotten ill and the daughter and children couldn’t afford a tree, so I reached out to my store manager and asked if there was anything we could do. And we were able to donate a Christmas tree and some ornaments.”

Family is important to Surrette, who was adopted while she was younger and grew up in Water Valley. Her children, now 11, 8 and 4, are growing up in the same schools she did. One work project brought her to Davidson Elementary in Water Valley last summer to landscape, plant trees and clean up flower beds. It wound up being her favorite project.

“I went to elementary school there back then, I have two sons there, with one about to leave and another coming up in it,” she said. “And just helping down there beautify it is something that they can see every day and my kids can say, ‘hey, my mom helped do that.’ And my oldest son even came out and helped as well on his summer break.”

Another school project took them to Della Davidson in Oxford where they planted trees and bushes in the snow.

“That was fun,” she said. “It was really nice. The teachers had hot chocolate and snacks.”

Surrette also has helped the Gordon Center in Abbeville secure new doors and a grant and helped the Cedar Guild receive materials.

While projects in education are meaningful to the soccer mom who also has children in chess, Boy Scouts and T-ball, she said she especially looks forward to working with YAC.

“It’s nice because their projects take more of an artistic approach than just here’s some wood and nails and go build something,” she said. “You have to be creative with it, so I do like that.”