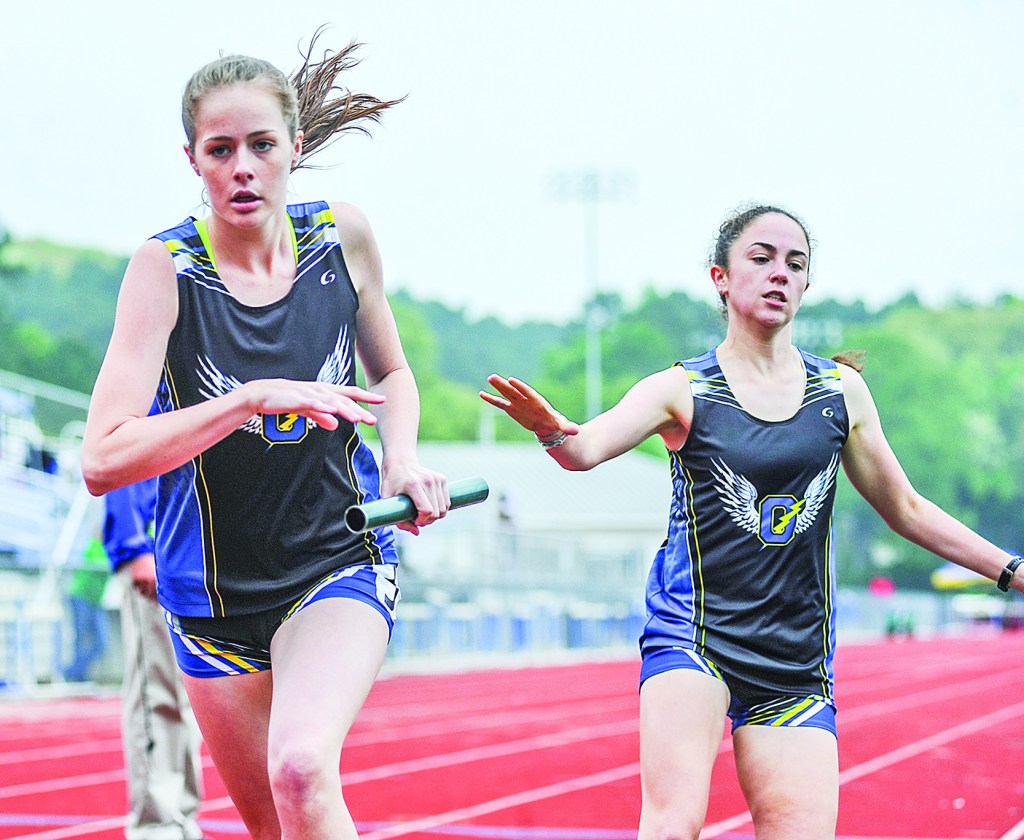 Oxford’s Swayze Elliott, left, takes the baton from Rebecca Grayzel-Ward in the 4x800-meter relay in the Class 5A Division 2 track meet at Bobby Holcomb Field on Thursday. The Chargers’ boys and girls teams swept the division titles.

Oxford’s track and field teams made easy work of the competition in the Division 2-5A meet Thursday at Bobby Holcomb Field, obliterating the field to claim the titles.

The Oxford boys took first place with 166 points while the girls tallied 171 points to take the title. The Chargers’ teams won by a combined 264.5 points with West Point’s boys being the closest runner-up with just 37.5 points.

“Overall it was a very good day,” Oxford coach Chris Bush said. “A few nagging injuries we had to tend to, but I think the athletes showed up and performed well. They executed like we wanted them to.”

In the field events, freshman Jackson Dear won the pole vault with a clearance of 9 feet, 6 inches. K.J. Gipson measured a distance of 21-5.75 to win his first-ever division long jump while Jacquez Neilson (45-8) and D.Q. Thomas (140-10) won the shot put and discus throw, respectively.

“(Gipson) has been with us all year, but he stayed hurt at the beginning of the year,” Bush said. “To see him come back, perform and find him a place on the team, that’s the philosophy of track. You come out and work, and usually track has something for everybody.”

Other first-place finishers for Oxford were Kathleen Patton (high jump), Charli Kendricks (pole vault), Bryanda Cannon (long jump and triple jump) and Monya Baskin (shot put). The Chargers also swept first place in the relays even without top sprinter Montayshia Wadley, who was nursing a hamstring injury, with a five-second win over West Point in the 4×100 being the closest finish.

“Overall, the girls bought in,” Oxford girls coach Chris Patton said. “When it was time, they stepped up. I’m just proud of them. Next week, we’re going to come back, take care of those injuries and improve on the performance that we had today.”

The top four finishers in each event qualified for the regional meet, which will be held April 23 at Bobby Holcomb Field beginning at 10 a.m.