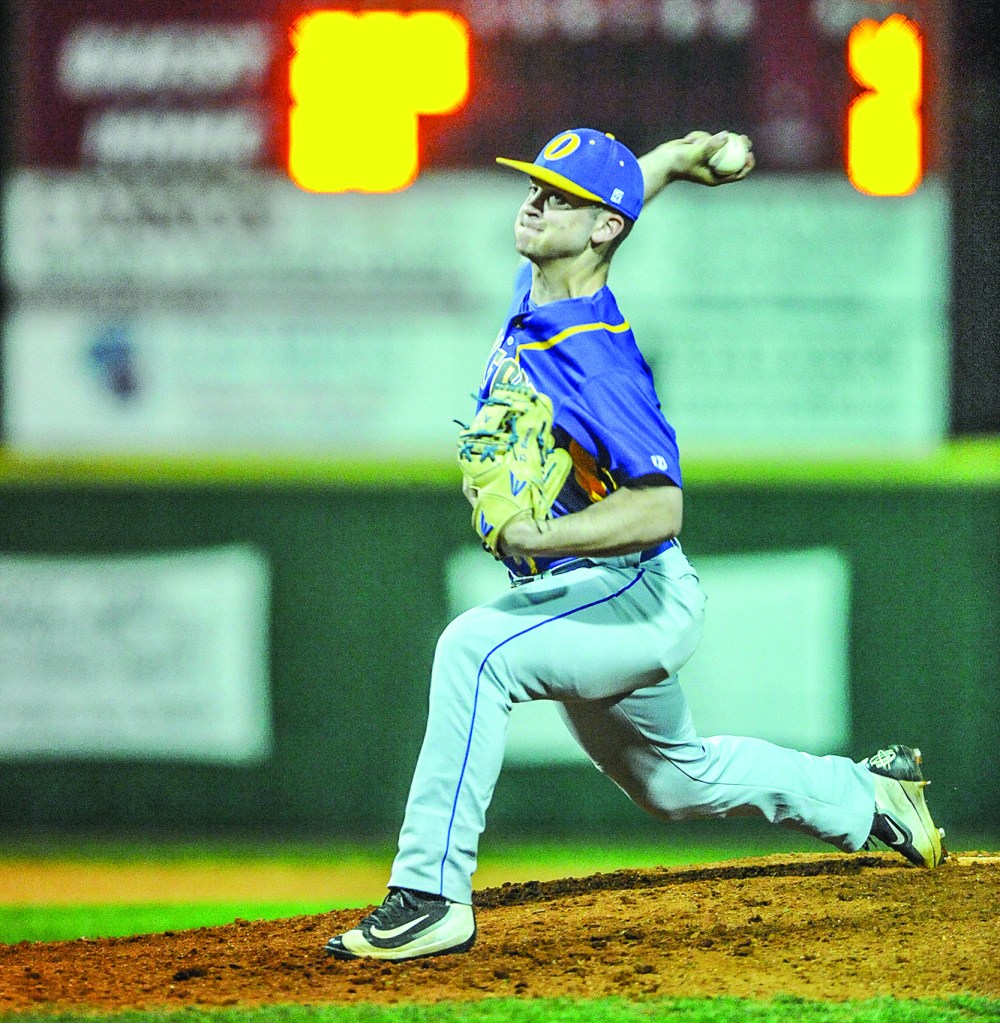 Oxford’s Drew Bianco hasn’t been hampered by his football injury this spring, even making his first pair of varsity starts on the mound for the Chargers’ baseball team.

Drew Bianco doesn’t take his usual spot on the infield for granted nearly as often.

The third of four sons to Ole Miss head baseball coach Mike Bianco and his wife, Cami, the younger Bianco has grown up with the game to where he’s now Oxford’s everyday second baseman as a sophomore. Bianco also helps set the tone near the top of the Chargers’ lineup slotted between leadoff hitter Grae Kessinger and Thomas Dillard, something he admitted he needs to be more consistent with.

“I’ve improved a lot in the field, but hitting, I haven’t been hitting my best,” Bianco said. “I’m putting some good swings on the ball and everything and more home runs than I expected, but I need to start getting some more hits and get that average up.”

But Bianco is glad he’s even able to still dress out after an injury in the fall initially left him wondering if he’d be able to continue playing anything.

Bianco became the starting running back on Oxford’s football team, but that lasted just five games after repeated blows to his right shoulder left him with stingers. A trip to a neurosurgeon in Memphis revealed Bianco had nerve deterioration that could eventually render his arm permanently useless if he continued to take hits.

“(The doctor) told my dad that if that was my kid, I wouldn’t let him play football any more,” Bianco said.

Bianco made the emotional decision to immediately give up football, and he wondered about baseball, which he called “my main sport.” But it wasn’t threatened as Bianco’s condition is only worsened by direct contact.

“Baseball is my love. I love doing it, and I’m going to try to play at the next level,” Bianco said. “But it kind of hurt knowing that I couldn’t play (football) anymore. We knew it, and it was just kind of understood that I was hanging it up.”

Said Oxford baseball coach Chris Baughman, “He took about a week off because (having to give up football) hurt him. It’s going to hurt a high school kid. He’s a competitor, and that’s the way he ran the football up there. Just ran hard and ultimately that may have cost him, but he wouldn’t have played any other way.”

Even with medical clearance to continue playing baseball, it wasn’t that simple for Bianco. He said he began to turn his attention strictly to baseball once football season was over, but there was some apprehension as he swung a bat, fielded balls and made throws for the first time since the injury.

Throws sailed and went wide of the intended target at times with Bianco admitting he wasn’t sure “if that was actually the shoulder or me playing scared or whatever,” but he eventually got back to his old self.

“I knew I threw it, but I didn’t feel like it was coming out of my arm,” Bianco said. “Just felt a little weird. But I just kept practicing and everything, and it just started getting back to normal. Now I feel pretty healthy.”

Bianco has made just four errors while starting all 24 games for Oxford, and he’s even made his first two varsity starts on the mound, winning one and losing one. He’s driven in 17 runs, is third on the team with six doubles and is second only to Dillard in home runs (5), though his coach would also like to see Bianco’s average (.264) and walk total (13) increase so he can be a more frequent weapon on the bases.

“When we get him on, he’s dangerous on the basepaths,” Baughman said. “We’ve just got to get him on more. Right now, he’s trying to hit the ball out of the ballpark. That’s not what we need him to do.”

But there’s no questioning Bianco’s abilities, which already has colleges taking notice. Bianco said he’s heard from Indiana and LSU, and he’s planning to visit LSU next weekend with Oxford having a first-round bye in the MHSAA Class 5A playoffs.