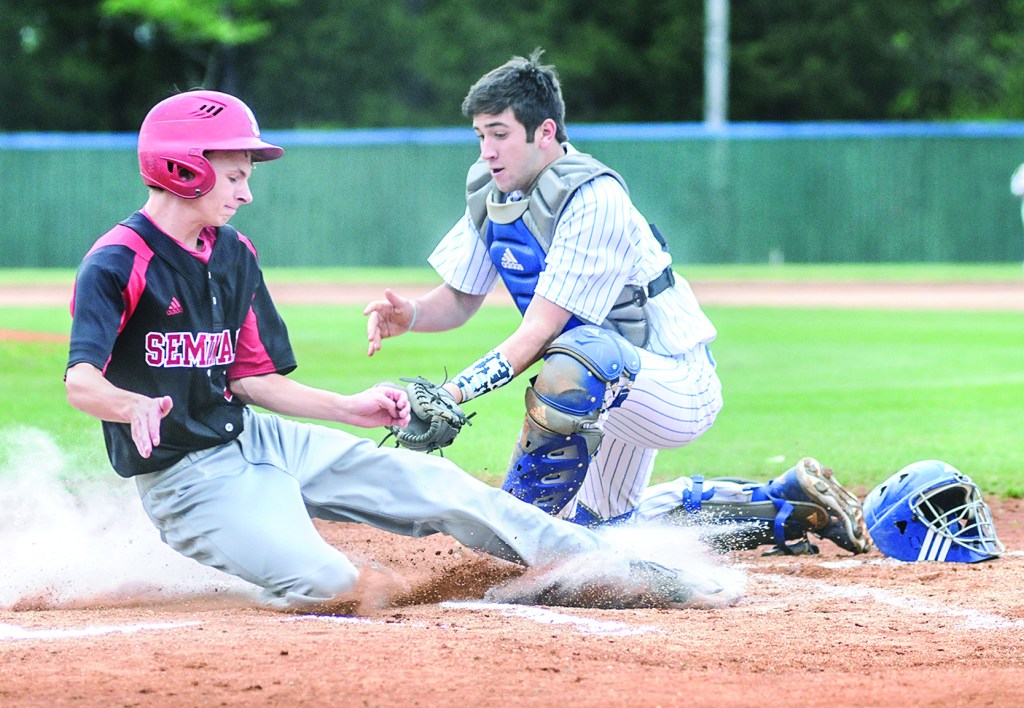 WATER VALLEY — The step up in competition Saturday was by design for Water Valley.

After rolling to another perfect run through Region 2-3A play, the Blue Devils got a better sense of what it can expect in the postseason with a doubleheader against Seminary, the Region 8-3A champion which began the day with just three losses. Water Valley (21-5) won the first game 2-1 in extra innings while Seminary (16-4) took the nightcap 5-0 at Blue Devil Field.

“I don’t think we’re going to face a better team than that in the playoffs,” Water Valley coach Kary Bridges said. “They’re really good. That’s what we had scheduled for this weekend and Grenada on Monday. We wanted to back-end our schedule as best we could with some good teams to give us a playoff feel, and Seminary certainly does that.”

The teams were originally scheduled to play Friday, but rain in the area postponed it to Saturday with the teams deciding to play a twinbill that was tightly contested from the start.

The opener wasn’t decided until the ninth inning with strong outings by Water Valley’s Cooper Clement and Seminary’s Anthony Clapp eventually giving way to a battle of the bullpens. Seminary outhit the Blue Devils 13-6, but Water Valley, which plated just one run in two bases-loaded situations earlier in the game, finally cashed in on a miscue by the Bulldogs to get the walk-off win.

Hunter Barrett retired the first two Blue Devils in the home half of the frame before Blayne Clark reached on an error. Clark advanced to second on a passed ball before Gavin Darby knocked in pinch-runner Martavius Rockett with a single back through the box.

“Big hit, and a big hit by Blayne to get it started,” Bridges said. “We had some chances, but they pitched out of it. I could sit here and sort of lament the fact that we left guys on base, but some of that was their pitcher made pitches, too. Got to give them credit to get out of it, but very proud of our guys.”

Barrett took the loss after allowing the run and two hits in 3 2/3 innings in relief of Clapp, who worked around four hits and six walks to keep Water Valley at bay. Clark threw two innings of three-hit relief to notch the win.

Four of Seminary’s hits came in the first against Clement, but the right-hander allowed the Bulldogs’ only run in the frame on Fisher Norris’ RBI single and eventually settled in. The East Central CC signee faced the minimum in the third, fifth and seventh innings, scattering 10 hits and striking out seven.

“Didn’t have his best stuff location-wise,” Bridges said of Clement. “But he minimized that first inning and obviously put a bunch of zeros up after that.”

Water Valley loaded the bases in the fourth for designated hitter Jack Burns, who drew the Blue Devils even with a bloop single over the infield to score Donovan Gaston. Pitching took over from there.

“I’m not going to say we haven’t faced teams like that this year, but they’re athletic and you’ve got to pitch to nine batters,” Bridges said. “That’s what you face when you get to this portion of the schedule and in the playoffs.”

Water Valley will conclude the regular season with Monday’s trip to Grenada for a 6 p.m. first pitch before hosting the first game of its opening-round series of the MHSAA Class 3A playoffs Friday.

Bridges likes where his team is at heading into the most important stretch of the season.

“I think if we continue to play the way we are and shore up a few things, we’re going to be a real tough out in the playoffs,” he said. “Somebody might beat us and we might beat them, but we’ll be a tough out. That’s all you can really ask for.”