Rawlings ‘prepared for whatever’ on line 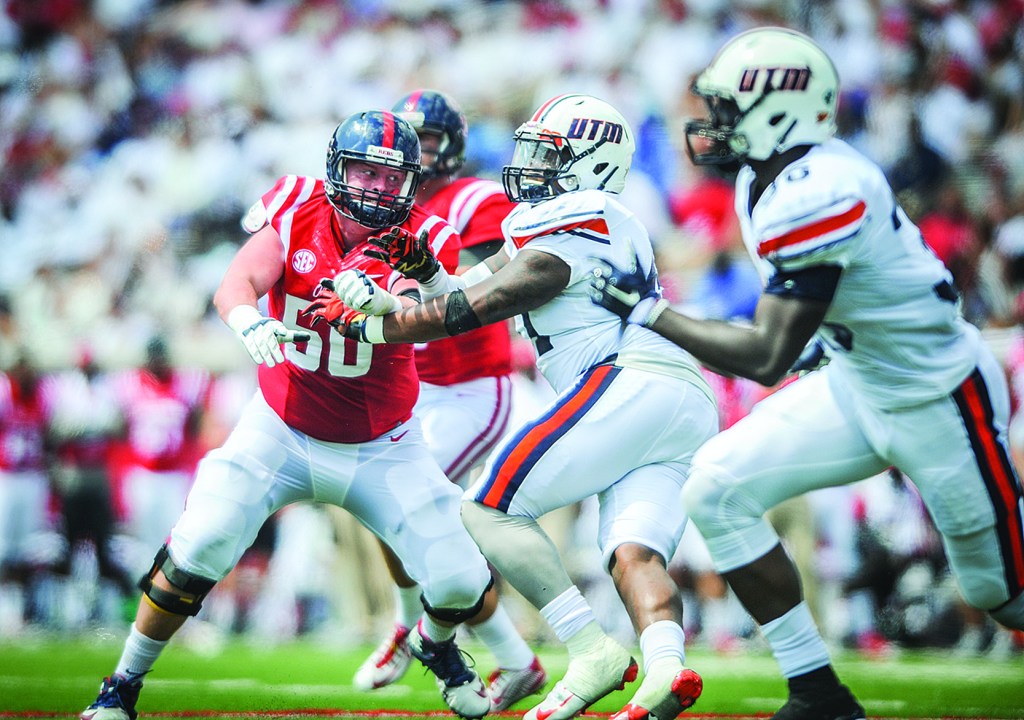 Ole Miss’ Sean Rawlings (50) spent most of this spring at center after starting seven games at tackle last season.

Sean Rawlings is in line to be a major contributor on Ole Miss’ offensive line in the fall, though exactly where he’ll spend most of his time lining up still has to be determined.

But the rising third-year sophomore spent the spring getting ready for whatever.

Rawlings got some unexpected experience last season after he was forced into action at right tackle once Laremy Tunsil’s seven-game suspension forced the Rebels to reshuffle up front, but the 6-foot-5, 280-pounder, who made seven starts at tackle last season, moved inside to work almost exclusively at center this spring.

“It’s been a good experience trying to get ready to play center and learning the whole scheme of the thing,” Rawlings said. “It’s completely different from tackle. Just trying to learn that and have that down before camp this year.”

The move was made in part because of the absence of rising senior Robert Conyers, who didn’t participate in spring drills after having ACL surgery midway through last season. Coaches would like to keep Rawlings at center once Conyers returns in the fall, though Rawlings, much like Conyers has done the last couple of seasons, will be ready to play at either spot.

“I’m going to be prepared for whatever happens,” Rawlings said. “I think whenever Conyers gets back, like (head) coach (Hugh) Freeze said, we’re going to be ready for either tackle or center. It’ll be kind of interchangeable, so whatever decision the coaches make.”

In addition to getting used to having more help blocking from teammates on the interior, Rawlings has had to become more vocal with them at his new position, trying to figure out what the defense is doing while making sure everybody up front is on the same page. He did it while fighting through a partially torn ligament in his hand toward the end of spring practice, his second injury in as many springs.

“At tackle, you’re on an island a lot and have more space to work. At center, that’s a little different,” Rawlings said. “The communication part is different. You’ve got make more calls, see the defense and read the defense more. Those are the main differences.”

Rawlings also found himself having to adjust to a different leadership role after the Rebels lost four seniors on the line as well as Tunsil, who’s widely projected to be one of the first players taken in this year’s NFL Draft. It’s a part all of the younger linemen have to play, Rawlings said, despite none of them having more than seven career starts.

“It’s kind of an opportunity for the guys with experience — me, Jordan (Sims), and Javon (Patterson), and (Jeremy) Liggins obviously has been here for (three) years,” Rawlings said. “It’s an opportunity for us to kind of step up, be leaders and kind of lead the younger guys.”

Rawlings said he noticed strides in himself and the rest of his line mates, but there’s more to be made over the summer and in the fall by everyone involved.

“It’s not where it needs to be obviously. It never is in the spring,” Rawlings said. “We need to continue to make progress and continue to develop as leaders and work together more communication-wise and make each other better.”