SETTING THE TONE: Bishop’s complete game leads ‘Dores past Ripley in 2-4A finale 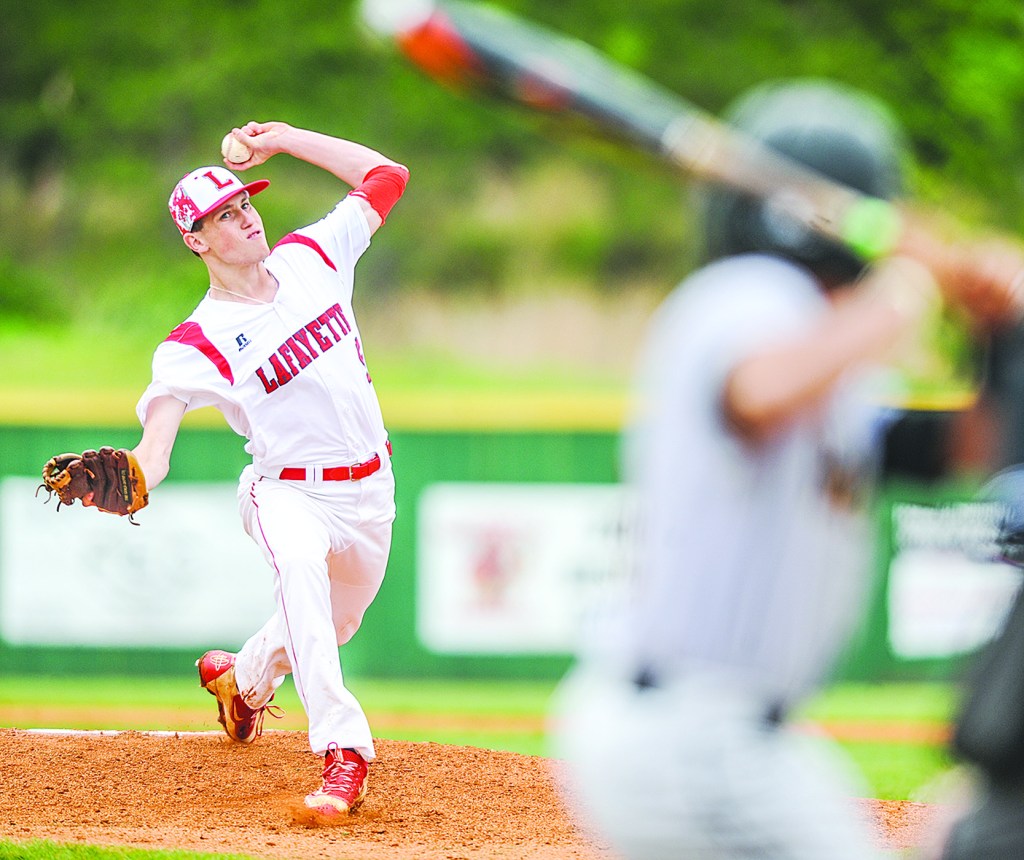 Lafayette’s Mack Bishop pitches against Ripley on Saturday at W.V. Brewer Field. Bishop went the distance to help the Commodores notch a 3-2 win in their Region 2-4A finale.

The game held little meaning for postseason implications as the seeding between the Ripley and Lafayette baseball teams had been decided earlier in the week with Ripley earning the region title and Lafayette finishing no worse than runner-up. It was still a meaningful game to Commodores coach Greg Lewis.

Lafayette rallied twice to defeat Ripley 3-2 in the teams’ Region 2-4A finale on Saturday at W.V. Brewer Field. The victory handed the Tigers their first region loss of the season.

“That’s the one we’ve been looking for,” Lewis said after the game of his team’s performance “We’ve been getting close to it every time, but we just hadn’t quite gotten there. That right there, that’s what I’ve been looking for. … I wanted to get (Ripley) to where they weren’t undefeated in district. That was the main thing.”

It was a rather uneventful game through the first three innings with it becoming a pitcher’s duel early on. Lafayette’s Mack Bishop and Ripley’s Cooper Cox allowed two hits combined in the first three frames. Bishop had a 10-pitch battle with leadoff hitter Marquelius Edgeston to begin the game but settled in after that, pitching a four-hit complete game for the victory.

Ripley finally got Bishop to blink first, scoring the game’s first run in the fourth inning off an RBI double by first baseman Jus Medlin.

“Both guys did a great job,” Lewis said of the starters. “I felt like both teams put it in play. We just couldn’t find the little hole and get the guy moving a little bit. After the third inning, we started finding a few holes then found a few more later on.”

After falling down 1-0, Lafayette responded in the home half of the fifth with two runs of its own. Each came off of passed balls by Ripley catcher Tucker Childers, allowing Tyler Williams and Luke Gossett to score the tying and go-ahead runs for a 2-1 lead.

It was short-lived as Ripley responded in the sixth inning when third baseman Ross Shackelford scored from second when Lafayette catcher Ross Ingram made a bad throw to try and pick off Shackelford, allowing him to reach third. He then scored on the same play as Bishop could not corral the throw behind third base and it rolled into Ripley dugout, awarding Shackelford home.

Lafayette responded once again in the bottom of the inning, taking advantage of a leadoff double by second baseman Will Cullen and scoring him on an RBI groundout by right fielder Will Christian for the winning margin.

As has not been the case most of the season, Lafayette had a solid day defensively to keep the game from getting out of hand in the middle innings.

With the bases loaded, Bishop danced out of trouble to keep the Ripley lead to only one run in the fifth inning. That was followed up by a huge catch in left field by Xavier Martin near the wall to keep two Tiger baserunners from potentially scoring in the sixth.

“We had a very good day (defensively),” Lewis said. “We didn’t drop any in the infield and may have even made the play to get us off the field in the end. …We walked a guy to make it (runners on) first and second thinking we’d had good success against (Cox). Then he gets on and all of a sudden it’s bases loaded, but it was great job by Mack to get out of it.”

With Lafayette the No. 2 seed in 2-4A, the Commodores will begin the MHSAA Class 4A playoffs on Friday at home against either Pontotoc or Itawamba AHS.