Baron of Bannockburn talks about Scottish heritage in Oxford 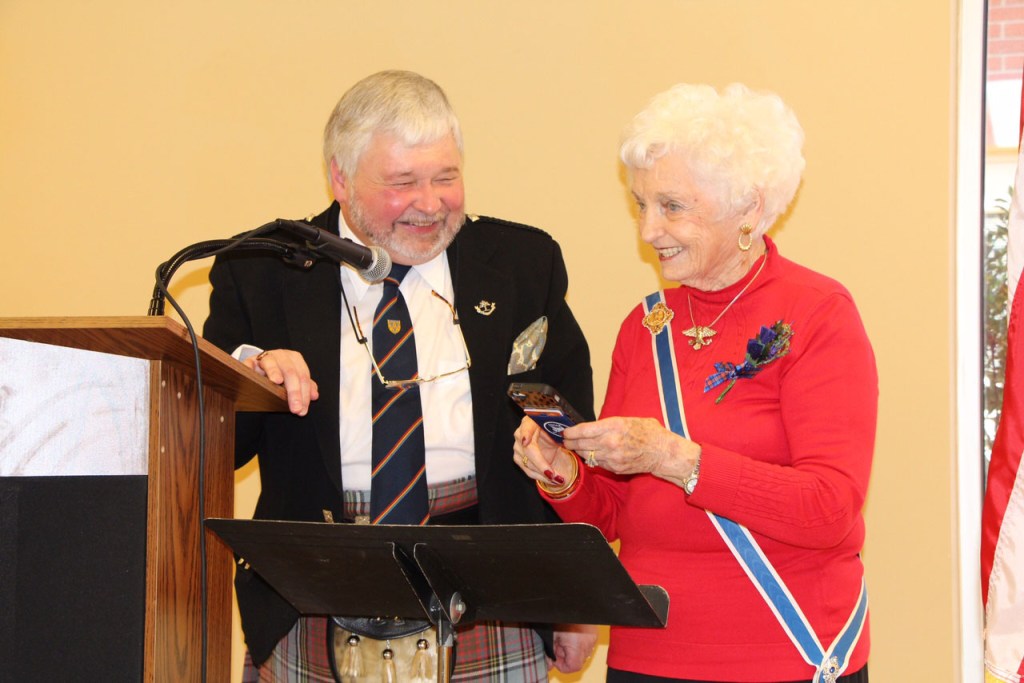 The Honorable Hope Vere Anderson, baron of Bannockburn and chief of the Clan Anderson Society, at left, shares a travel memory with Billie Breedlove, state regent, at the annual guest luncheon of the David Reese Chapter, Mississippi State Society Daughters of the American Revolution.

Hope Vere Anderson knows a good thing when he sees it. He can also tell about its ancestry, if asked.

It was that ancestry angle that brought Anderson to Oxford to talk about Southerners’ Scottish and Scots-Irish heritage.

Speaking at the annual guest luncheon of the David Reese Chapter of the Mississippi State Society Daughters of the American Revolution on April 7, he discussed the 2,000 years of Celtic and Gaelic history that resulted in mass Scottish and Scots-Irish emigration to the Americas.

Anderson said that significant groups of settlers from Scotland and Ireland came to the Americas during the early part of the 18th century and after the American Revolution. He recalled that the English crown had oppressed Scottish citizens since before the rift between queens (Mary Stuart and Elizabeth Tudor). The settlers known in America as Scotch-Irish were disgruntled Protestant citizens from the Scottish and English border areas who had been resettled under King James VI during the first decades of the 17th century into northern Ireland for political reasons.

Known to his peers as the Baron of Bannockburn, Chief of the Clan Anderson Society Worldwide and Lord of Sherrifhales, Anderson grew up in the art and antiques business. He worked alongside his father in Scotland, and then at Edmiston, the Glasgow auction house later absorbed by Christie Manson & Woods. He is a fellow in the Society of Antiquaries of Scotland.

When an art- and antiques-dealing colleague in Murfreesboro, Tennessee, decided to retire in 1982, Anderson took over the fellow’s business. He has maintained a trans-Atlantic business as an auctioneer and valuer of art, antiques, classic cars and real estate ever since.

“Most of the appraisals I do are in the United States because of my specialty in Scottish, English and Continental art and antiques,” Anderson said.  “We are in an interesting transition in the antiques marketplace right now.”

When not providing specialty expertise in art and antiques, Anderson is likely to be found leading eager Americans on personalized lineage tours through Scotland and the borderlands in England and Ireland.

“I started putting together tours 30 years ago because people were asking me to take them through castles and great homes to view the collections. Over time, the tours evolved as the tour participants became more interested in their genealogical roots.”

Anderson said he conducts an average of four tours a year, and has six scheduled for 2016. Most of the tour groups comprise eight to 12 travelers, usually never more than 16.

In 2014, he conducted a large tour for the National Society Daughters of the American Revolution (NSDAR) to celebrate America’s historical leaders with Scottish roots. Ninety-three people participated in that trip, during which a wreath was laid at a statue of Scottish-born American Founding Father John Knox Witherspoon, a signer of the American Declaration of Independence.

“I would love to do a future tour for Oxonians to go to Oxford, England, and to Scotland,” he said. “Everywhere I turn in the South, and particularly here in Oxford, I recognize familiar Scottish names. In the U.K., the American Revolution is still sometimes referred to as that ‘Scots-Irish Presbyterian rebellion.’”

Anderson pointed out that 19 of 56 Continental Congress delegates were from Scotland or Ulster, or — like Thomas Jefferson — had ancestors from the region.

He said that, like American DAR members, he also has an ancestor patriot who served in the American Revolution. His ancestor, though, was a cabin boy on a British ship during the blockade of New England. That cabin boy survived the American wars and eventually became Sir John Hope, admiral of the British Fleet.