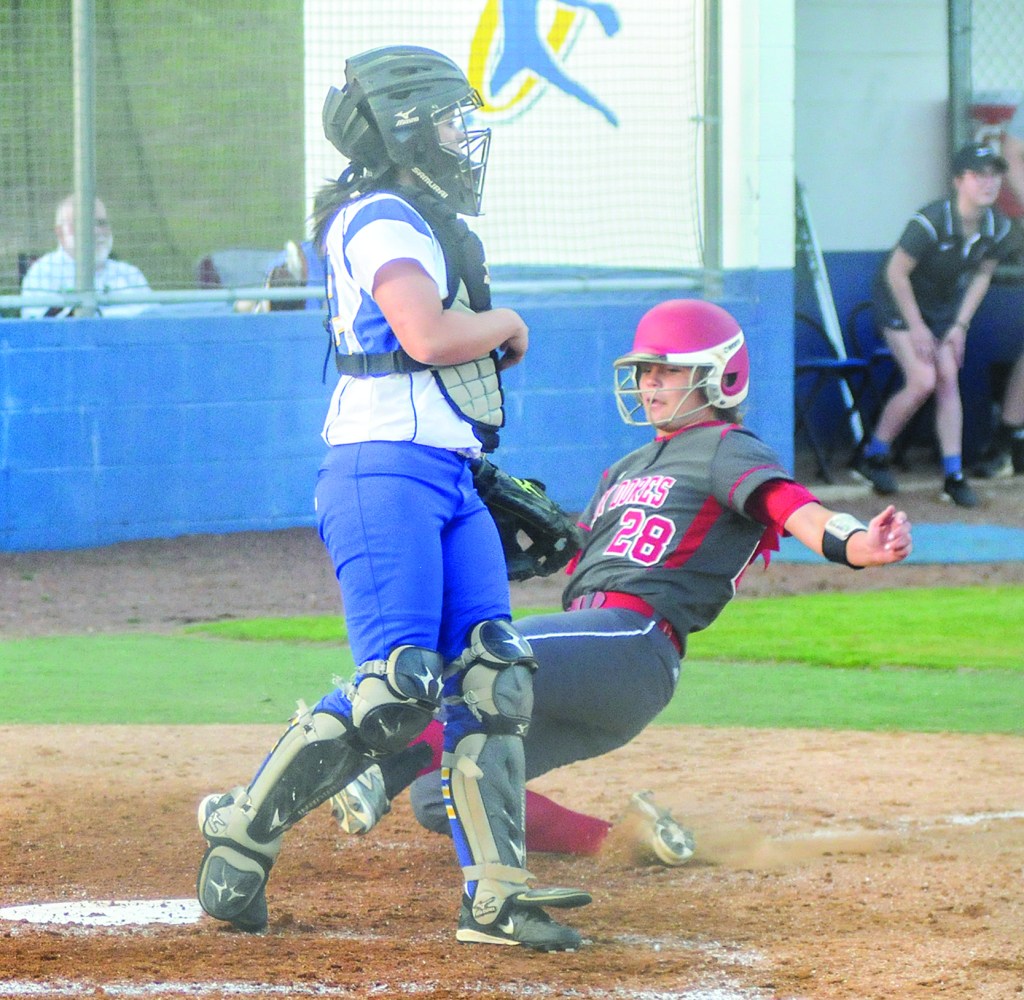 Lafayette’s Chelsea McCullough (28) slides safely into home as Oxford catcher Harley Thomas looks on during Monday’s game at the OHS softball field. The Commodores defeated Oxford for the second time this season with an 18-5 win in six innings. (Jake Thompson)

The Lafayette High softball team has had its crosstown rival Oxford’s number for quite some time. On Monday night, it appeared things might be bouncing the Chargers’ way for once, but after a few huge innings and scoring 13 runs in the last two frames, Lafayette remained in charge.

The Commodores defeated Oxford 18-5 in six innings at the Oxford High softball field on the campus of Oxford Middle School, sweeping the season series in the process.

In uncommon fashion, it was the Chargers (2-11) who got on the board first with an RBI groundout by shortstop Madison Crosby to score Kaytlon Pegues for an early 1-0 lead after the first inning.
From there, it looked as if things were going to unravel quickly for Oxford and starting pitcher Amber Pettis, who gave up five runs on three hits and watched her defense commit three errors as Lafayette (14-8) took a 5-1 lead.

Oxford rebounded with Crosby recording her second RBI of the night, scoring Pegues from third after her leadoff triple, then reaching base on an error by Lafayette shortstop Emily Robinson and cutting the deficit to 5-2 after three innings.

“I told them those first four innings were the best we’ve played all year,” Oxford coach Steve Blackmon said. “We were in the game then (Lafayette) got the big inning in the second and then we probably helped them out a little bit. Other than that, it was a ball game that was fun to watch.”

Pettis held Lafayette in check after the shaky second inning, but after once through the order, the Commodore bats began to figure her out, batting around for five runs on four hits and taking advantage of another Oxford error to break the game open 10-2.

“Pitching was just a little slower, and it took us a minute to adjust,” Lafayette coach Katie Jenkins said. “We didn’t do our fundamental job of adjusting, and we had to have moments and talk more about it. The pitching is what got us in the get-go.”

After Oxford plated three more runs in its half of the fifth inning, the Commodores once again got to Pettis, who worked a complete game. Lafayette scored eight runs in the sixth inning for the winning margin.

It was not all bad for the Chargers as they showed some good defensive skill with Pegues catching a routine fly ball in center field for an out then throwing out Lafayette’s Shelbi Buford at third for the unconventional 8-5 double play in the fourth inning to keep it a 5-2 game at the time.

“Flashes of brilliance,” Blackmon said of his defense. “There was a lot to be pleased with but obviously not the last two innings, and I told them there’s not much time to worry about it.”

Postseason picture
Tonight will clear up Oxford and Lafayette’s playoff pictures with two key region games on their schedules.

Oxford will travel to West Point with both battling for the third and final playoff spot in Region 2-5A. A sweep would keep Oxford’s season alive while splitting tonight and Wednesday’s makeup game from last week with West Point would rely on tiebreakers.

Lafayette’s postseason fate is already sealed. It just depends where the Commodores will fall. The Commodores host Pontotoc tonight in the season finale at 7 p.m. in a game that will decide the second and third seeds in Region 2-4A.