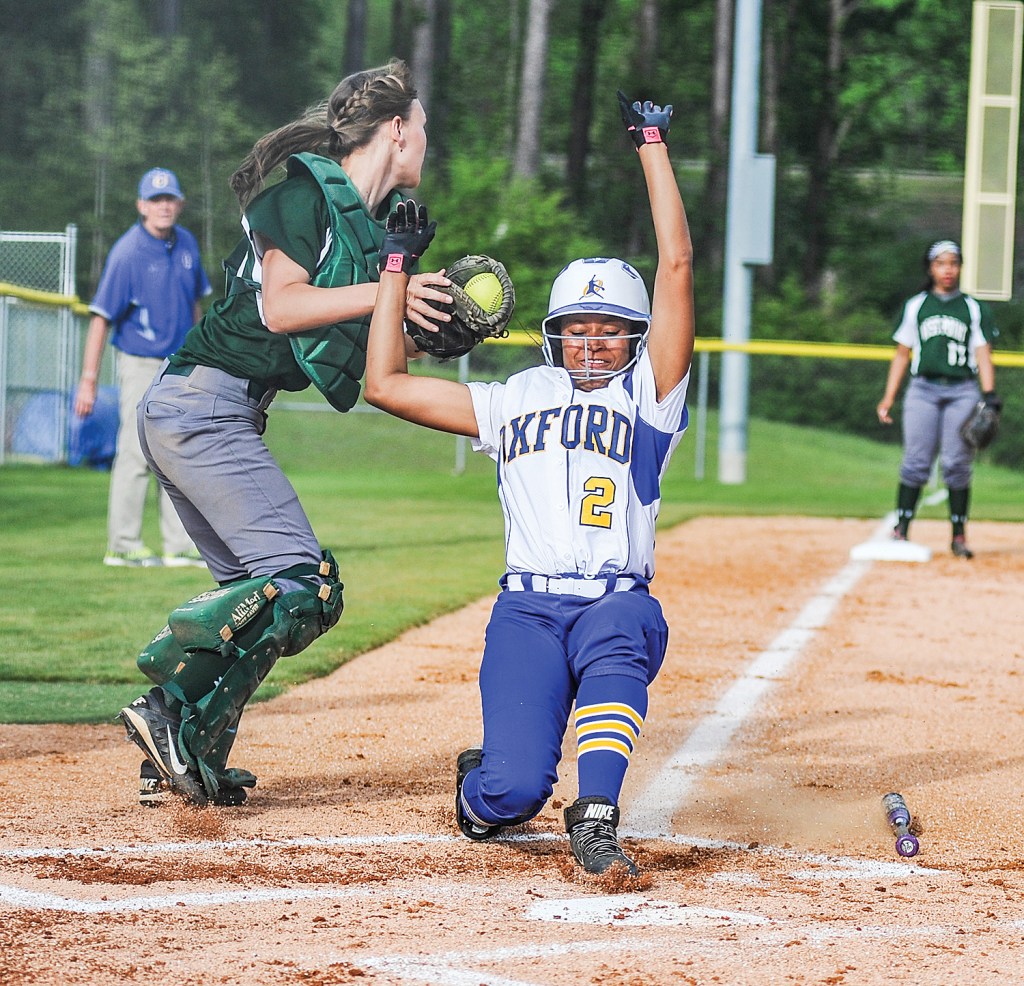 Oxford’s Elisha Webb (2) is tagged out in the first inning by West Point’s Jana White (25) during Wednesday’s Region 2-5A game at the OHS softball field. The Chargers won 10-5 to clinch their spot in the MHSAA Class 5A playoffs. (Bruce Newman)

Oxford has assured itself of playing some meaningful softball this weekend.

The Chargers took down West Point 10-5 in their regular-season finale Wednesday at the OHS softball field to clinch the third and final playoff seed in Region 2-5A. Oxford had to win by at least two runs to keep its season alive, and an offensive onslaught in the middle innings put the Chargers on their way to their most meaningful win against the Green Wave, whom Oxford lost to just 24 hours earlier.

Oxford will host Vicksburg in Game 1 of the teams’ MHSAA Class 5A first-round playoff series Friday at 6 p.m. A doubleheader will be played Saturday in Vicksburg if needed.

“We didn’t push it real hard because that pressures kids,” Oxford coach Steve Blackmon said. “We said, ‘Let’s just play like we know we can.’ I said after (Tuesday’s loss) that we’re not going to harp on mistakes, but we’ve got to look at what we did wrong so we know what to fix. … Tonight for the most part, the defense didn’t let us down.”

Amber Pettis got the win for Oxford, settling in after West Point took a 2-0 lead through two at-bats to allow the Chargers to make their comeback. Pettis allowed four runs on six hits and worked around four walks in five innings before Madison Crosby closed it out with two innings of one-run relief.

The pair got help from a cleaner performance than usual from their defense, which made many of the routine plays despite helping the Green Wave at times with three errors. Oxford’s offense put plenty of pressure on West Point’s Shea Hodnett, racking up eight hits, drawing five walks and taking advantage of three West Point miscues to turn an early deficit into a convincing victory.

“We’ve had too many games this year where we’ve had five, six, seven, eight (errors),” Blackmon said. “Even if it was one or two, that’s not giving the game away.”

Oxford came up empty on its first threat with two on and one out in the bottom of the first, but bases-loaded walks drawn by Elisha Webb and Crosby in the second drew the Chargers even.

The Chargers did their most extensive damage in the fourth, getting to Hodnett for six runs on four hits while also drawing two more free passes to create some breathing room. Kelsey Wilborn and Kaytlon Pegues both had RBI knocks for extra bases in the frame.

West Point got one back in the top of the fifth on Chamiya Browlee’s RBI single, but Kyla Malone had the loudest swing of the night in the home half of the inning with a two-run home run to center to halt the Green Wave’s momentum for good.

“That was huge,” Blackmon said. “Coming in that inning, I said, ‘They got one closer. Don’t let them have momentum. Let’s answer back and get it back.’ And what a great swing.”

Webb went 2-for-3 with two RBIs while Madison Rainey also had two hits and drove in a run for Oxford.