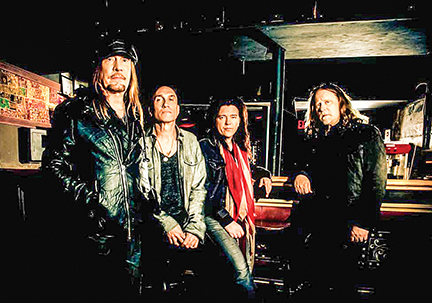 submitted Matt Abts, from left, Danny Louis, Jorgen Carlsson and Warren Haynes are Gov’t Mule who will perform Saturday at The Lyric Oxford. Doors open at 7:30 with the show beginning at 8:30.

Rock torchbearers Gov’t Mule performs Saturday night at The Lyric Oxford. The show begins at 8:30 with doors opening at 7:30. Tickets are $32.50 to $120 and can be purchased at www.thelyricoxford.com.

No two Gov’t Mule shows are alike, as the band draws on the more than 300 songs in their repertoire (and often a host of special guests) to create a unique experience each and every time. Its steadily expanding fan base knows that the Mule always has something special waiting for them. Expect the unexpected.

The deep chemistry and steely confidence shared by the quartet allow them to tackle any form of music and stamp it their own while remaining true to the spirit and intent of the original. This can, of course, be heard any time guitarist-singer Warren Haynes, drummer Matt Abts, bassist Jorgen Carlsson and multi-instrumentalist Danny Louis take the stage.

Haynes’ unparalleled ability to bring together different musicians into a cohesive whole or to pull off epic musical happenings is one of the many reasons why Haynes stands apart from the many great front men and guitarists who have graced the musical landscape.

Combined with his guitar and vocal mastery, these skills have made him an in-demand presence and indispensible musical ally for many. This was shown most recently on Mule’s most collaborative album to date, “Shout!,” its most recent (and 15th) studio album.

The one-of-a-kind project is a double CD featuring two versions of every song — one with Haynes singing and the other featuring a host of guest vocalists, including Dave Matthews, Ben Harper and Elvis Costello.

“Making Shout! a double CD with guests was a cool way to mark our 20th anniversary,” Haynes said. “Each song has it its own personality; it sounds like Gov’t Mule but doesn’t sound like anything we had ever done. The songs cover a lot of the influences that have made Gov’t Mulewhat we are from the beginning. I think it’s the most diverse record we’ve made. These new archival live releases just further that concept and allow us to highlight some of our influences as well as how far we’ve come since the first album.”

Indeed, it would have been hard for those listening to Gov’t Mule’s self-titled debut, filled with thunderous power trio rumblings of Haynes, bassist Allen Woody and drummer Matt Abts, to envision them remaining true to this original vision, while also expanding to include reggae and horn-driven, backup singer-sweetened, classic rock covers by Pink Floyd and the Rolling Stones, but that’s the tricky feat the band has pulled off, as illustrated by their upcoming live albums.

“I wouldn’t recommend any of these releases as a starting point,” Haynes said. “But I would strongly recommend all of them to anyone who already knows the band. They capture different sides of us and each also features us playing very different sets of our own music as well.”

Gov’t Mule was formed in 1994 when Haynes and bassist Woody were playing in the Allman Brothers Band and talking about their shared passion for old-school power trios.

“We were listening to a lot of Led Zeppelin, Cream and Free, caught up in the musical freedom they displayed,” Haynes said.

Haynes called up drummer Matt Abts, with whom he had played in the Dickey Betts Band. The band recorded three increasingly ambitious studio albums and performed countless shows before Woody died in August, 2000.

After briefly pausing to ponder their next move, Haynes and Abts began recording “The Deep End,” two CDs featuring guest bassists, ranging from the Who’s John Entwistle to the Grateful Dead’s Phil Lesh.

“Everything we’ve done collectively has led up to where we are now,” Haynes said. “But those Deep End sessions, and the experience of playing with so many bassists and adapting to different sounds and approaches had a profound effect on Gov’t Mule and what we’ve done since.”

Louis, a longtime collaborator, became a full-time member of Gov’t Mule in 2001, and the group has been a four-piece ever since. Bassist Carlsson has been with the group since 2008, solidifying the lineup.

“I think a lot of the music we’re doing now is very similar to the music we were making in the earliest years with the obvious exception that we are no longer a trio,” Haynes said. “In some ways we’ve come full circle and in other ways it only makes sense if you step back and connect the dots. And that seems right to me. You want to keep growing and you never want to be static, or done changing.”